We can’t believe anything coming from Biden or his campaign.

“The Biden team is under fire for releasing a TV campaign ad last week depicting a Michigan bar owner struggling to keep his business afloat during the pandemic.

What the ad fails to mention is the man is actually a wealthy tech investor who made contributions to the former vice president’s campaign. He also supported Michigan Gov. Gretchen Whitmer’s stay-at-home orders that kept businesses shuttered longer.

The ad, which was posted to YouTube on Thursday and aired Sunday on CBS during NFL games, features Joe Malcoun, who is listed as the “co-owner” of The Blind Pig, a once-popular bar and music venue in Ann Arbor, Mich. Malcoun blamed his business’ economic downturn on President Trump’s COVID-19 response.

“For 50 years, The Blind Pig has been open and crowded – but right now it’s an empty room,” he says in the one-minute ad, showing the empty venue. “This is the reality of Trump’s COVID response.”

“We don’t know how much longer we can survive not having any revenue. A lot of restaurants, bars that have been mainstays for years will not make it through this. This is Donald Trump’s economy,” he continued. “There’s no plan, you don’t know how to move forward. It makes me so angry. My only hope for my family and this business and my community is that Joe Biden wins this election. That’s the kind of person we need.”

Today, @FoxNews ran a story about the Biden campaign apparently using a wealthy CEO (and donor) to depict a struggling bar owner. The first time I watched the ad, comments were disabled. I went back, and the vid had been made private. This was the ad. pic.twitter.com/NV7JGs6YMP

The ad also featured the song “Sabotage” by The Beastie Boys, marking the first time the group licensed one of its songs for use in a political advertisement.

What Malcoun doesn’t say in the ad is that there’s a small chance he’ll face financial ruin if The Blind Pig goes under, given he’s a prominent “angel investor” in several local tech companies.

In an April tweet Malcoun also praised Whitmer, arguing “she’s doing it right” by continuing the state’s stay-at-home order, which sparked protests and forced businesses like The Blind Pig to remain closed longer. 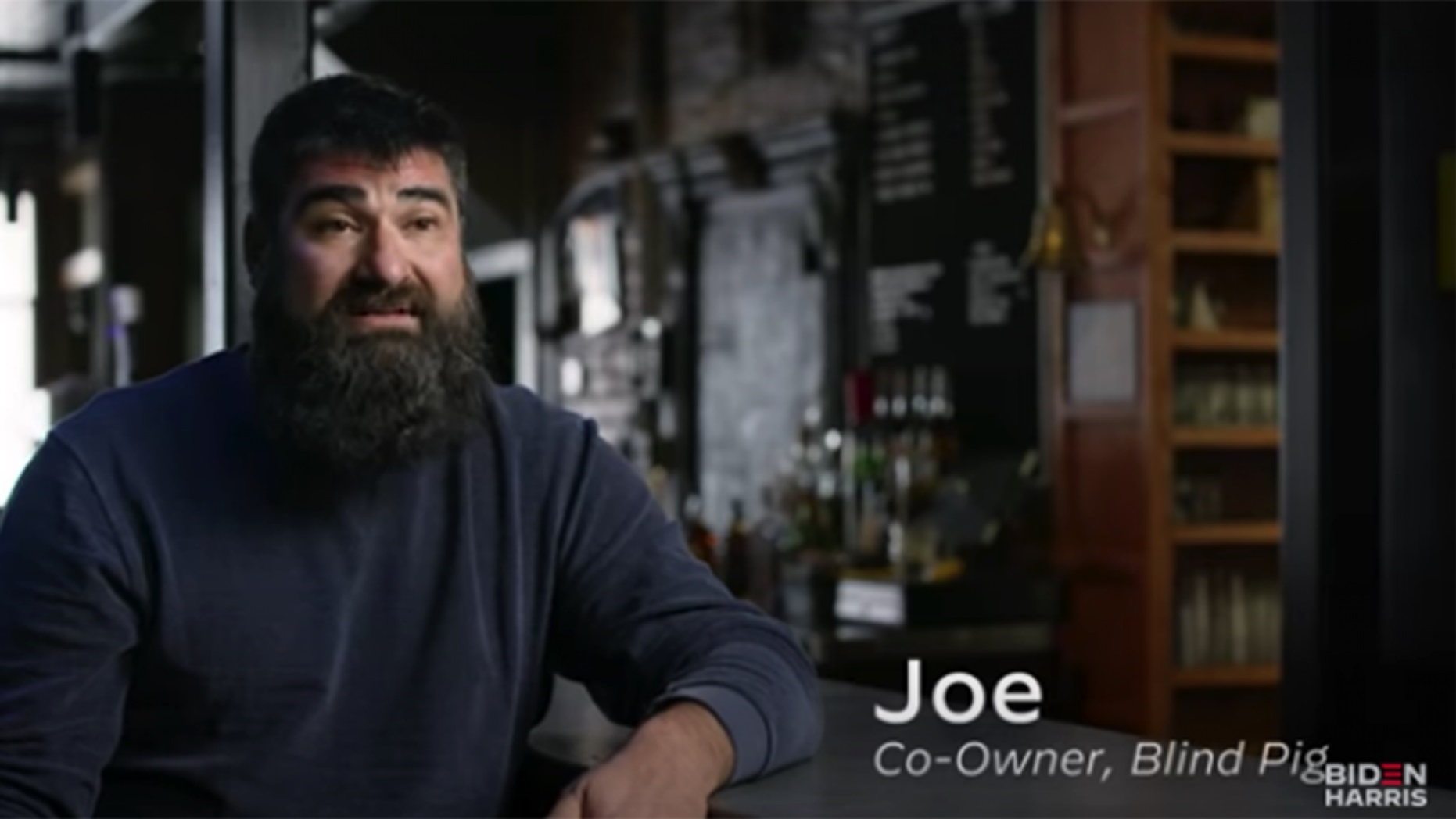 Earlier this month, the Michigan Supreme Court struck down Whitmer’s orders to continue extending Michigan’s coronavirus-related state of emergency without legislative approval. The initial state of emergency was set to end on April 30 and Whitmer used executive powers to extend it.

The Blind Pig briefly reopened in June, adhering to strict requirements such as requiring masks, enforcing social distancing, aggressive cleaning, and limited guests. But Malcoun told MLive in an interview at the time that he decided to cancel future live events for the summer, citing low attendance and difficulty communicating updated coronavirus rules to the public.

“Now that we tried it and saw it’s really hard to communicate what it means to have a really socially distanced and live music show, we decided it’s not really worth trying. The very last thing we want is to be the epicenter of a new outbreak,” Malcoun told the newspaper.

After inheriting money from his wife’s grandfather, which he likened to “winning the lottery,” Malcoun said he founded CKM Capital Partners in 2013 and eventually became an “angel investor” in local tech companies, according to a 2018 interview with Click On Detroit.

He’s also served as CEO of Nutshell, a customer relationship management software company, since 2014, and under his leadership the firm raised at least $5.5 million in angel and venture capital, according to his Crain’s Detroit Business 40 under 40 profile.

According to Federal Election Commission data, Malcoun donated $5,000 to Biden For President in July.

The Biden campaign and Malcoun did not immediately return Fox News’ request for comment.

The Daily Caller reported that the Biden campaign took down the video today.

Meanwhile, the Biden campaign also pulled a different TV ad after retired Lt. Gen. Sean MacFarland raised concerns about depicting any military personnel in uniform in political messaging – for either Biden or President Trump – before Election Day, Politico reported. The ad included photos take in Iraq showing Biden walking beside MacFarland, who led the fight against the Islamic State from 2015 until 2016.

“A number of people have understandably inferred that my appearance constitutes an endorsement of the former vice president. It does not,” MacFarland wrote last week in a since-deleted LinkedIn post. “To be clear, I have not endorsed President Trump, either. I’m not a political person, but this isn’t about just me. I object to the use of ANY military personnel in uniform in political ads – full stop. That goes double for generals and admirals, even if we have since retired, as I have.””