The not-so-tolerant left in action again. This will be even more common if Biden is elected.

“A California man has been arrested after he allegedly attacked several people, including an elderly woman, during a rally held in support of President Donald Trump on Wednesday night.

Alvin Gary Shaw, 33, confronted the small group of people during the gathering in Aliso Viejo – 50 miles south of Los Angeles – around 6.30pm.

Shaw allegedly blew smoke in some of the supporters’ faces and used his cigar to burn one person’s Trump sign, according to local reports.

The rally, held on the corner of Aliso Creek Road and Pacific Park Drive, saw between 20 and 30 people gathered. 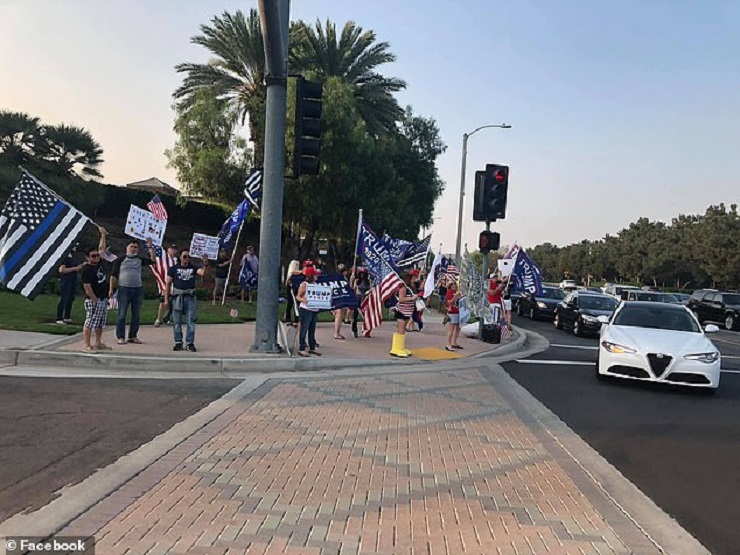 One woman carried a black sign that read: ‘Jesus is King.’

Videos show the supporters laughing and cheering as cars drive by, some honking their horns in support.

Witnesses told KTLA that their two-hour event was coming to a close, when Shaw began walking over to them.

Cynthia Cantrelle-Westman told the local station that when she first saw him approaching, she thought he was coming to join the group.

‘Instead, he was pretty upset and he started using profanity from the minute he arrived,’ she said.

Donna Snow, another Trump supporter, added: ‘He kept coming over to me and getting in my face, and all I could say was the F-word.’

In the video, Shaw is heard saying: ‘F*****g goodbye, I’m not going to be respectful when you out here disrespecting my people.’

Witnesses say he blew smoke in their faces and used his cigar to burn one supporter’s Trump sign.

‘He took his hand way back like he was going to punch me, and [he] hit me right across the face,’ Snow, told CBS Los Angeles.

‘Broke my earrings off.’

One of the other two victims was taken to a local hospital with a neck injury, but it is unclear how old he or she is.

Shaw then pulled out a small pocket knife, which is when a retired police officer arrived on the scene and drew his gun.

The assailant tried to run, but was eventually forced to the ground, according to the Orange County Sheriff’s Office.

Shaw was arrested on suspicion of elder abuse, assault with a deadly weapon and assault and battery.

Records show he was released from jail on Thursday after posting bail. According to the Orange County Sheriff’s Department, Shaw works for the US Postal Service.

‘This could have been a very serious incident,’ Sgt Dennis Breckner told CBS Los Angeles.

‘In this case, this was just two groups that disagree, and while we support people and their using their First Amendment rights to put out their message, we prefer that that remain peaceful.’

In a Facebook post, Cantrelle-Westman said she was interviewed by the investigation team at the police station in Aliso Viejo.

She says she wants to ‘speak openly about the mayhem’ because she considers the gathering ‘a beautiful event that went south because of one individual.

‘Fear and faith cannot live in the same house.’ she wrote

‘We will go on with God at the helm in the face of adversity. Thank you Law Enforcement for keeping us safe. We know what you face each day and will pray for our enemies.'”