Democrats unhappy with President Trump have touted a surge in support which they say will lead to them flipping the House in November. While that “surge” has waned in recent months, Democrats are still convinced that those upset with how the president handles issues will sweep them to victory. A new poll just out may put a damper on their hopes, though.

A Reuters/Ipsos poll released early today shows that millennials who would usually vote Democrat, are now leaning Republican, and they’re leaning that way because of Trump’s & the Republicans’ handling of the economy & the tax cuts.

Younger people have tended to vote Democrat over the years as can be seen in the chart below. 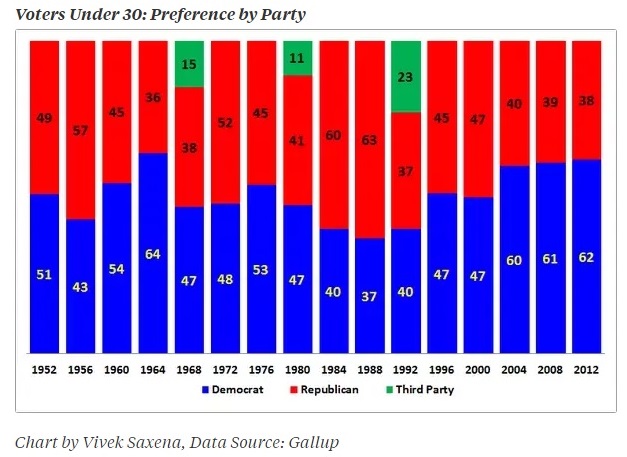 That appears to be changing, though, at least for the upcoming election.

“Enthusiasm for the Democratic Party is waning among millennials as its candidates head into the crucial midterm congressional elections, according to the Reuters/Ipsos national opinion poll.

The online survey of more than 16,000 registered voters ages 18 to 34 shows their support for Democrats over Republicans for Congress slipped by about 9 percentage points over the past two years, to 46 percent overall. And they increasingly say the Republican Party is a better steward of the economy.

Although nearly two of three young voters polled said they do not like Republican President Donald Trump, their distaste for him does not necessarily extend to all Republicans or translate directly into votes for Democratic congressional candidates.

That presents a potential problem for Democrats who have come to count on millennials as a core constituency – and will need all the loyalty they can get to achieve a net gain of 23 seats to capture control of the U.S. House of Representatives in November.

Young voters represent an opportunity and a risk for both parties, said Donald Green, a political science professor at Columbia University in New York City.

“They’re not as wedded to one party,” Green said. “They’re easier to convince than, say, your 50- or 60-year-olds who don’t really change their minds very often.”

Terry Hood, 34, an African-American who works at a Dollar General store in Baton Rouge, Louisiana and took this year’s poll, said he voted for Democrat Hillary Clinton in the 2016 presidential election.

But he will consider a Republican for Congress because he believes the party is making it easier to find jobs and he applauds the recent Republican-led tax cut.

“It sounds strange to me to say this about the Republicans, but they’re helping with even the small things,” Hood said in a phone interview. “They’re taking less taxes out of my paycheck. I notice that.”

The Reuters/Ipsos poll surveyed young voters during the first three months of this year and the same period in 2016. 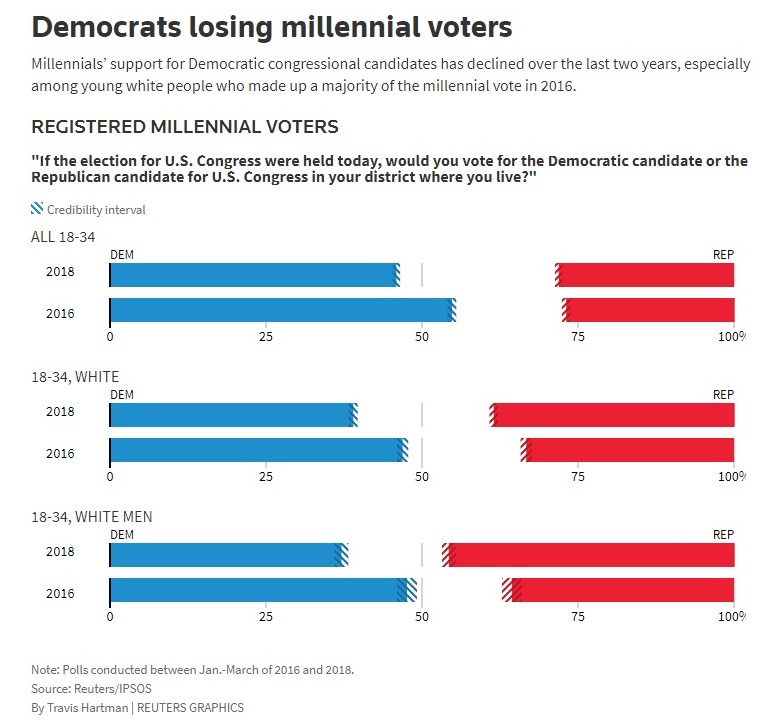 Only 28 percent of those polled expressed overt support for Republicans in the 2018 poll – about the same percentage as two years earlier.

But that does not mean the rest will turn out to back Democrats, the survey showed. A growing share of voters between ages 18 and 34 years old said they were undecided, would support a third-party candidate or not vote at all.

The shift away from Democrats was more pronounced among white millennials – who accounted for two-thirds of all votes cast in that age group in 2016.

Two years ago, young white people favored Democrats over Republicans for Congress by a margin of 47 to 33 percent; that gap vanished by this year, with 39 percent supporting each party.

The shift was especially dramatic among young white men, who two years ago favored Democrats but now say they favor Republicans over Democrats by a margin of 46 to 37 percent, the Reuters/Ipsos poll showed.

Ashley Reed, a white single mother of three in New Hampshire, said a teenage fascination with Democrat Barack Obama led her to support his presidency in 2008. But her politics evolved with her personal life.

Reed, now 28, grew more supportive of gun rights, for instance, while married to her now ex-husband, a U.S. Navy technician. She lost faith in social welfare programs she came to believe were misused. She opposed abortion after having children.

Reed plans to vote for a Republican for Congress this year.

“As I got older, I felt that I could be my own voice,” she said last month in Concord, New Hampshire.

The Reuters/Ipsos poll was conducted online in English throughout the United States. It gathered about 65,000 responses in all during the first three months of 2018 and 2016, including 16,000 registered voters between the ages of 18 and 34 and nearly 11,000 registered white millennial voters.”

President Trump has been saying we need more Republicans in the House & Senate. Perhaps with the help of millennials, we’ll get just that.

THE SECOND AMENDMENT WILL NEVER BE REPEALED! As much as Democrats would like to see this happen, and despite the words yesterday of former Supreme Court Justice Stevens, NO WAY. We need more Republicans in 2018 and must ALWAYS hold the Supreme Court!

Hard to believe Obstructionists May vote against Mike Pompeo for Secretary of State. The Dems will not approve hundreds of good people, including the Ambassador to Germany. They are maxing out the time on approval process for all, never happened before. Need more Republicans!