“Supreme Court Justice Ruth Bader Ginsburg passed away Friday night at the age of 87 due to complications from metastatic pancreatic cancer.

Moments after news broke of her passing, Senate Majority Leader Mitch McConnell pledged a full Senate vote on the nominee of President Donald Trump’s choosing with the election looming less than 50 days away.

“[email protected] We were put in this position of power and importance to make decisions for the people who so proudly elected us, the most important of which has long been considered to be the selection of United States Supreme Court Justices. We have this obligation, without delay!”

.@GOP We were put in this position of power and importance to make decisions for the people who so proudly elected us, the most important of which has long been considered to be the selection of United States Supreme Court Justices. We have this obligation, without delay!

After erupting into a historic outbreak of civil unrest this summer that claimed the lives of more than 30 people while trashing minority businesses, launching violent assaults on state and federal police officers, and carrying out more than $1 billion in property damage in the name of social justice, radical left-wing activists are now planning to do it all again if the president executes his mandated White House authority to appoint a new Supreme Court justice.

“If they even TRY to replace RBG we burn the entire fucking thing down,” wrote liberal writer Reza Aslan. Aslan used to have a show on CNN.

You all have been threatening, and attempting that for 4 years now. This is a terrorist threat. Thanks to all the traitors to America for poking their heads out today. You make this all too easy for us. https://t.co/D917dCddj9 https://t.co/2GBCzlRxhY pic.twitter.com/yYfIuHCGin

“We’re shutting this country down if Trump and McConnell try to ram through an appointment before the election,” warned Writers Guild of America President Beau Willimon. 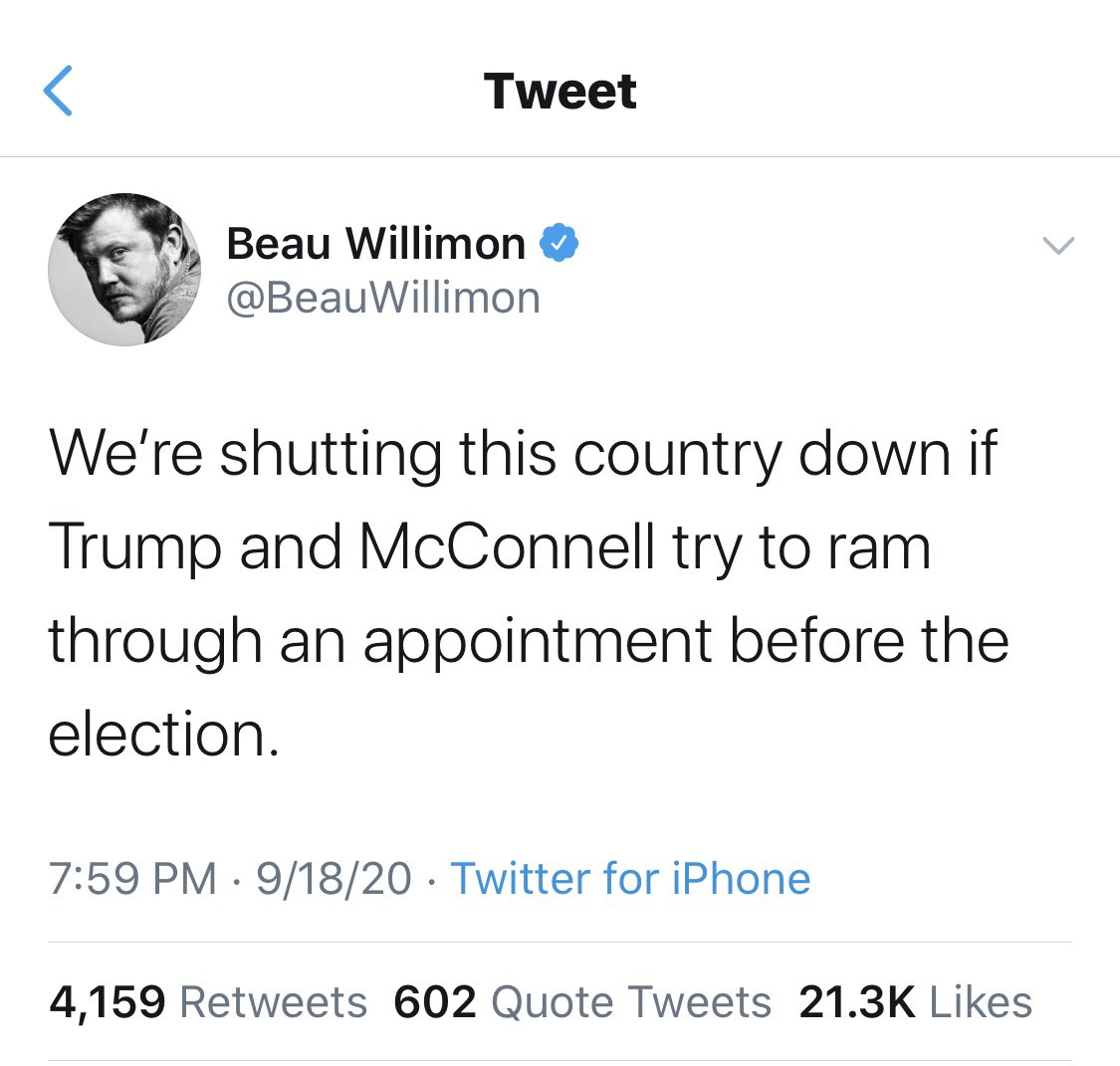 “If Mitch McConnell jams someone through, which he will, there will be riots,” threatened Laura Bassett whose work has been published in GQ Magazine and the Washington Post.

Thanks, Laura, for letting us know who has been behind the riots. https://t.co/32chOHcsmU pic.twitter.com/ErSvDSd6dl

Australian astrophysicist Dr. Jessie Christiansen tweeted: “IF THEY RAM THROUGH AN APPOINTMENT IN THE NEXT TWO MONTHS I WILL RIOT. This is an actual nightmare.”

Writer Beau Willimon wrote: “We’re shutting this country down if Trump and McConnell try to ram through an appointment before the election.”

RELATED: Professor Defends Killing Of Trump Supporter By Antifa Supporter: ‘I See Nothing Wrong With It’

Political commentator Katie Herzog wrote: “All we can hope for in times like these is that Mitch McConnell has a stroke from laughing too hard. To clarify: I don’t want him to die. I just want him to be brain dead. I’m not a monster.”

"I hope Mitch McConnell would die or go brain dead. I mean from laughter, of course…" – Katie Herzog, not a monster. https://t.co/jONiNtUewi https://t.co/t628VG3H7B pic.twitter.com/O7sMRqL17Y

Another leftist wrote: “tell me when we’re meeting outside mitch mcconnell’s house.”

In August of 2019, protesters appeared outside of Senator McConnell’s home and said someone should “stab the motherfu*cker in the heart.” https://t.co/317nYnNaUd pic.twitter.com/JZbxHnHya2

Professor Emmett Macfarlane wrote on Twitter: “Burn Congress down before letting Trump try to appoint anyone to SCOTUS.”

Here’s a run-down of more than a dozen other threats coming from liberal activists on Twitter, with examples running practically endless across the website.

If these threats sound familiar, that’s because they are.

For weeks, the media had already been priming for potential violence over the outcome of the November election in the event that Trump emerges with a triumphant second-term win after the same legacy outlets failed in every other avenue of de-legitimizing the president’s victory in 2016 through endless perpetuation of the Russia hoax and the cheering of the Democratic impeachment.

“Perspective: The election will likely spark violence — and a constitutional crisis,” the Washington Post prophesied earlier this month. “In every scenario except a Biden landslide, our simulation ended catastrophically.”

“Strictly law-and-order Republicans who have responded in dismay to scenes of rioting and looting have an interest in Biden winning – even if they could never bring themselves to vote for him,” magazine contributor Shadi Hamid wrote, because if Trump wins, Democrats are going to blow the country up for a second time.”

these articles are starting to sound less like thoughtful commentary and more like threats of violence. pic.twitter.com/iBIFk49DRA

Buckle up, people, it’s about to get bumpy.