Earlier this year the liberal Ninth Circuit Court upheld a lower court’s decision to suspend the ban of possession of large magazines in California. It was a victory for those of us who live in the state.

Now the NRA and another pro-Second Amendment organization are suing Washington State over gun control laws that were just approved by voters.

“The NRA and Second Amendment Foundation filed suit against the gun controls in Washington state’s Initiative 1639.

I-1639 is a 30-page gun control conglomeration that bars 18- to 20-year-olds from exercising their Second Amendment right to purchase commonly-owned semiautomatic firearms. It also puts an enhanced background check in place for those commonly owned firearms, adds a 10-day waiting period on purchases of said guns, and enacts new gun storage laws, among other things.

We are disappointed that too many Evergreen State voters were fooled into supporting this 30-page gun control scheme, despite overwhelming law enforcement opposition. This initiative is an affront to the constitutional rights enshrined in the Second Amendment and the Washington state constitution, especially for young adults.

We’re determined to fight this egregious measure because constitutionally-protected rights should never be subject to a popularity vote. The wealthy elitists behind I-1639 want to turn a right into a regulated privilege. This measure was only designed to have a chilling effect on the exercise of a constitutional right by honest citizens while having no impact at all on criminals, and we cannot let it go unchallenged.”

“On the same day that the National Rifle Association and Second Amendment Foundation announced they would be challenging Washington state gun measure I-1639 in a federal court, U.S. Marine Lt. Col. Oliver North, NRA president and former host of Fox News’ “War Stories with Oliver North,” told KIRO Radio’s Dori Monson that he finds the measure not only unconstitutional, but also incredibly confusing.

“I don’t understand how, one, they plan they’re planning to enforce it, and number two, how they’re defining what an assault weapon is,” said North, stating that he had read the full 30-page text of the initiative. “It’s nuts to me — I just quite frankly don’t understand it.”

In a press release, SAF Vice President Alan Gottlieb stated on Thursday that the initiative, which voters passed in last week’s election, “is an affront to the constitutional rights enshrined in the Second Amendment and the Washington state constitution.”

I-1639 will enact some of the strongest gun control measures in the country, including raising the age to purchase a semi-automatic rifle from 18 to 21; establishing background checks, mandatory training, and waiting periods before the purchase of semi-automatic rifles; mandating that gun owners lock their firearms in a safe; and making it a felony if a gun owner’s firearm that is not properly locked away is stolen and used in the commission of a crime.

Chiefly of concern to the NRA and SAF are the new age restrictions on the purchase of semi-automatic rifles, as well as the initiative’s ban on selling firearms to non-residents, which the gun rights organizations say violates the Commerce Clause of the U.S. Constitution.

“There are those of us who believe that law-abiding citizens who have firearms ought not to be punished,” North said. “That’s the whole essence of what the Second Amendment is about.”

He finds it absurd that 18-, 19-, and 20-year-olds are allowed to give their lives fighting for their country in the military, yet now will not be permitted to buy a semi-automatic rifle back on U.S. soil in Washington.

“Eighteen-year-olds are serving right now in Iraq and Afghanistan and Syria in the uniform of the U.S. Armed Forces,” he said. “And he comes home and he’s 19 and he can’t buy a firearm? Where’s the common sense in that?”

He added that “classifying all semi-automatic rifles as an assault weapons” is “setting folks up for false expectations.”

North said that the NRA has a plan that will be far more proactive and effective than I-1639 in preventing mass shootings in schools; the NRA’s School Shield program provides 130,000 schools across America with a vulnerability assessment, a “list of recommendations that will help reduce the risk,” and grants to make the recommended security changes.

“That’s actually doing something to protect American school children — it ought to be a national imperative,” North said, adding, “The reality of it is, all of these other measures are aimed at law-abiding citizens. This measure, unlike anything else anyone is doing in America, is done free, and it’s provided for them as a service … and accomplishes real protection for kids that’s going to stop this kind of killing.””

Hope the NRA is successful! 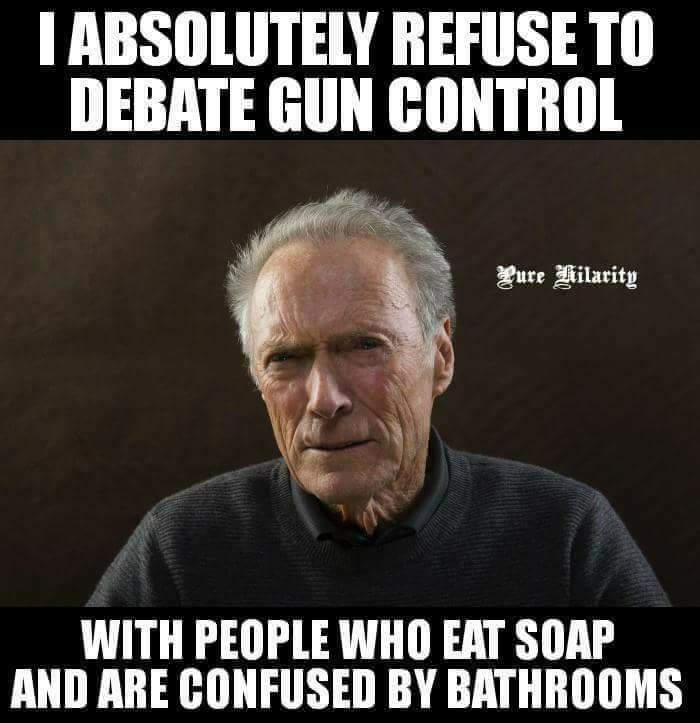 Share this if you think the only gun control should be good grouping!