When members of your own leftist party are coming after you for refusing to deal with President Trump you know you have problems. Grab some popcorn for the show.

The Daily Wire is reporting that “Speaker of the House Nancy Pelosi (D-CA) refused the White House’s offer of a $1.8 trillion “compromise” deal on coronavirus relief almost immediately upon offering, but some prominent Democrats are now firing back at the longtime leader, telling her to take the deal.

Andrew Yang, a former Democratic presidential candidate, tweeted point-blank at the Speaker over the weekend, telling Pelosi to “take the deal” or risk political fallout.

“Nancy Pelosi take this deal!” Andrew Yang, he said, directing her to the $1.8 trillion plan. “Put politics aside people are hurting.” 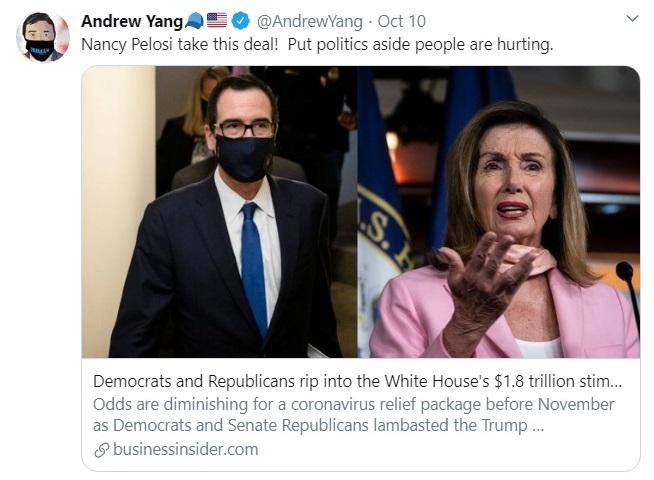 Former Obama administration bigwig Dan Pfeiffer agreed, telling Pelosi to ignore “potential risks” and ink the deal with President Donald Trump, sending relief to families in need instead of forcing them to wait until after the presidential election.

“While there are potential risks, Democrats should aggressively pursue a COVID Relief deal with Trump,” Pfeiffer tweeted.

“It’s the right thing to do, but the politics can also work in our favor,” Pfeiffer added, citing an op-ed that suggests Democrats will share both credit and blame — and would be better off sharing credit ahead of a contentious November election.

WATCH: Biden Says 56% Of Americans Who Think They’re Better Off Now Than 4 Years Ago ‘Probably Shouldn’t’ Vote For Me

Even progressive Rep. Ro Khanna (D-CA), who typically falls further to the left than Pelosi on most issues, urged his boss to ink the deal, suggesting that the stimulus package would make Joe Biden’s transition to power much easier if he wins in November.

“People in need can’t wait until February. 1.8 trillion is significant & more than twice Obama stimulus,” Khanna said. “It will allow Biden to start with infrastructure. Obama won in 08 by doing the right thing on TARP instead of what was expedient. Make a deal & put the ball in McConnell court.”

There are a lot of frustrated Dems and literally millions of frustrated Americans who just want Congress to do its job and provide relief during the pandemic. People are hurting and time is not on our side. https://t.co/9cDnFjJS6o

The deal doesn’t cover all of Democrats’ top priorities, but it does, reportedly, deliver a second round of $1200 stimulus checks to individual taxpayers, grants a small reprieve from student loan payments, and extends the supplemental federal unemployment benefit, though it lowers the weekly amount from $600 to $400 (it currently sits at $300, where applicable). The bill also, according to experts, extends a hand to cities and states suffering from the economic fallout from coronavirus lockdowns, though it does not allow cities and states whose financial issues predate COVID-19 to claim benefits.

The $1.8 trillion bill does not include a bailout for the United States Postal Service, something the Democrats have insisted on, but it is remarkably close to the amount Democrats wanted to spend to “bail out” American industries. The final Democrat-authored coronavirus relief bill came in at $2.2 trillion, just around $400 billion less than the White House’s version.

Pelosi, though, called the deal a “step back” in a letter to colleagues.

“This proposal amounted to one step forward, two steps back,” she said, noting that it failed to include “strategic plan to crush the virus,” even though few entities are prepared to issue such a plan, even the Centers for Disease Control and Prevention (CDC). Instead, the CDC is focused on issuing temporary guidelines to control and limit coronavirus transmission while the White House pursues a coronavirus vaccine.”