While many on the left were screaming that “Trump will be the first president not to visit our troops at Christmastime since 2002,” he was actually on his way to Iraq with First Lady Melania Trump to surprise those serving there. It was a trip that required much secrecy as the war-torn nation can be quite dangerous for Americans, not to mention for the President of the United States.

Because the trip wasn’t announced publicly, leftwing media was quick to try & make it seem like Trump doesn’t support our men & women in uniform. NBC News ran a story titled: 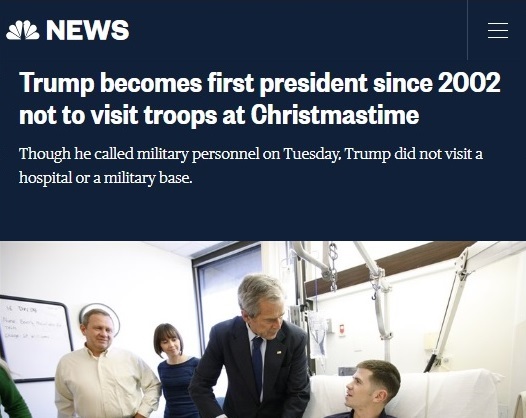 Even has-been actress Alyssa Milano who mocked the triple-amputee vet who started the wall fund chimed in with stupidity about President Trump:

“Trump becomes first president since 2002 not to visit troops at Christmastime.”

Trump becomes first president since 2002 not to visit troops at Christmastime. https://t.co/VEyyij9B0S

Milano was responding to TV host Montel Williams’ attack on the president where he stated:

“Instead of visiting the troops, @realDonaldTrump has: Crashed the stock market, gone to war with Jim Mattis, delivered a nice Christmas gift to Vlad (Syria) and presided over an “immigration policy” that has killed two kids in a week…”

Instead of visiting the troops, @realDonaldTrump has: Crashed the stock market, gone to war with Jim Mattis, delivered a nice Christmas gift to Vlad (Syria) and presided over an “immigration policy” that has killed two kids in a week… https://t.co/amHrKhAqpW

Of course, those on the left like Milano & Williams, being ignorant of how most things work in the world, were flat out wrong. President Trump had in fact been planning to visit those serving overseas, and when he & Melania got to Iraq, they were greeted with a hero’s welcome. The servicemen & women in the massive crowd THUNDERED out the chant of “USA, USA, USA” as Trump & Melania took the stage.

Former Deputy Assistant Secretary Of Transportation, Oliver McGee, who left the Democrat Party to become a Republican, posted this video of President Trump’s speech to the troops:

If @NATO @G7 want US to do the fighting, #NATO @g20org must pay their share of price. @realDonaldTrump, Al Asad AFB, Iraq #BorderWall pic.twitter.com/b5t38LkXH3

President Trump Tweeted out an amazing video compilation of his surprise visit:

.@FLOTUS Melania and I were honored to visit our incredible troops at Al Asad Air Base in Iraq. GOD BLESS THE U.S.A.! pic.twitter.com/rDlhITDvm1

“President Donald Trump defended his decision to withdraw troops from Syria during a surprise visit to Iraq on Wednesday to meet with U.S. troops, his first encounter with soldiers serving under his command in a combat zone.

Trump’s journey, cloaked in secrecy during a government shutdown, comes as he weighs a major reduction in forces in the 17-year-old conflict in Afghanistan. He ordered the withdrawal of roughly 2,000 U.S. troops in Syria and is overseeing a shakeup in the top rungs of military leadership.

“The United States cannot continue to be the policeman of the world,” Trump said. “We don’t want to be taken advantage of anymore by countries that use us and use our incredible military to protect them.”

Trump and first lady Melania Trump left the Washington region late Christmas night. Air Force One flew overnight and landed under the cover of darkness Wednesday at Al Asad Air Base, west of Baghdad. Trump spent about three hours on the ground in Iraq, meeting with soldiers in a dining hall and addressing a large group of troops in a hangar.

“We’re no longer the suckers, folks,” Trump told the troops, according to the Associated Press. “We’re respected again as a nation.””

By the time this was posted, the President and Mrs. Trump were in Iraq with the troops. https://t.co/g9ACNO5hxn

Wow she’s on a roll! First the veteran thing with me now this?!? Meanwhile Tump visited troops in Iraq today.

“Dear Libs, Presidential trips to conflict zones are NOT scheduled days in advance. They’re scheduled weeks in advance w/advance teams on the ground up to 1-2 weeks prior. Your dopey suggestion that Trump took this Iraq trip in response to your criticisms this week is just dumb.”

Dear Libs,
Presidential trips to conflict zones are NOT scheduled days in advance. They’re scheduled weeks in advance w/advance teams on the ground up to 1-2 weeks prior. Your dopey suggestion that Trump took this Iraq trip in response to your criticisms this week is just dumb.

Here is President Trump’s full speech to our troops in Iraq.

The left did everything they could to make it seem like Trump hates our servicemen & women, but they were destroyed by reality. Our heroes overseas had an amazing time with President Trump & Melania. It’s awesome that they took the time & made the dangerous trip to honor those serving to keep us safe & free.

Share this if you love that Trump & Melania honored our heroes!