The hateful left is up to it again. They control the social media platforms that a majority of Americans use to communicate with every day. Now Twitter is blocking the wall fund petition started by triple-amputee vet Airman Kolfage.

Kolfage has raised almost $17 million for construction of President Trump’s border wall, and he started a petition to urge Republican lawmakers to pass legislation that will allow the federal government to accept those funds and use them only for the wall. Almost 3 million patriotic Americans have signed Kolfage’s wall petition. Now a message pops up on Twitter if you click the link to the petition that warns people that the site “may not be safe.”

This is what you see when you click the link to Kolfage’s petition site, www.wefundthewall.com: 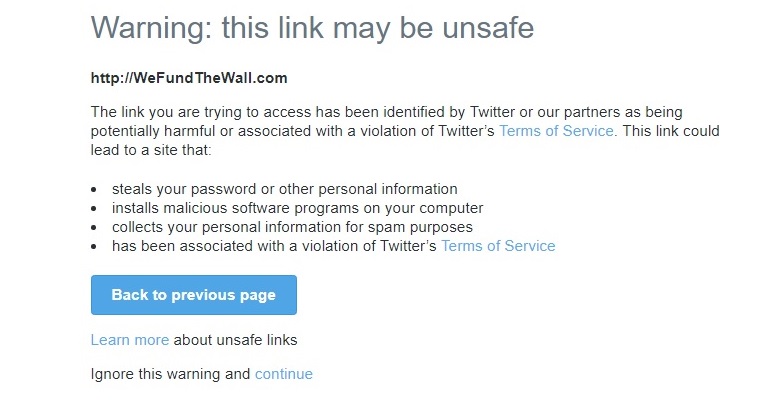 Airman Kolfage is traveling to DC after Christmas to pressure Republican lawmakers to pass the wall fund legislation introduced by Congressman Warren Davidson (R-Ohio). The legislation has to be passed before Democrats take over the House in January. Dem Rep Sheila Jackson Lee has introduced opposing legislation that will BAN the government from using the funds Airman Kolfage is raising to build the wall.

URGENT!! Twitter is supressing our petition! Get it in the media now

Airman Kolfage sent the following message out about the legislation today:

I need you for one very important task before Christmas approaches. I’m heading to Washington DC after Christmas to sit down and get this wall funded with our politicians.

You might ask how will I do this? Well, this petition I have created adds another layer of support to show our politicians. Have you all signed it yet? YOU are making this happen but what I need is for you to email it to everyone you know and ask them to sign it. Post it on your social media as much as possible encouraging everyone to share it. We need MILLIONS of signatures to show congress and senate Americans want this wall.

I’m fighting for Americans, I’m sacrificing my personal time and putting our country first; something I learned in the military. Please stand with me as I do this.

Please share this link and statement below everywhere, we made a post for you, just copy the entire thing below:

Friends & Family – Please sign the OFFICIAL Border Wall Petition that Brian Kolfage will hand deliver to DC this week. He needs millions of signatures to get the border wall funding passed and it’s up to us! LETS GET IT DONE!

In October, Facebook took down Airman Kolfage’s pages because he was such a massive influencer in conservative politics. He had about 10 million followers on the social media platform. You can read how Zuckerberg & Facebook stole $315,000 from Kolfage when they shut him down here.

Because of that, Airman Kolfage started the Fight4FreeSpeech website. He is currently preparing to sue Facebook. You should definitely get involved if you are concerned about social media companies censoring conservatives. Both Facebook & Twitter took down my accounts & pages the same day they did Kolfage’s because I worked with him for years.