This after Twitter CEO Jack Dorsey said that the platform hasn’t censored President Trump and a report that they had actually done so 64 times. They’re obviously trying to influence the election in Biden’s favor. Sickening.

“The head of U.S. Customs and Border Protection railed against Twitter on Thursday after he said the social media platform locked his account for violating its policies on hate speech when he tweeted about the U.S.-Mexico border wall.

At a news conference marking the 400th mile of completed wall, CBP Commissioner Mark Morgan argued that the tweet that prompted his account to be frozen was meant to praise the work of workers at his agency and the efficacy of the wall in general.

“My tweet intended to educate the American people that borders matter, and the great things done by the men and women of CBP and DHS as a whole. My tweet was intended to emphasize that border security is national security,” he said.

Morgan contended that “the tweet was similar to hundreds and hundreds of tweets that I’ve sent over the past couple of years.”

Screenshots of the tweet provided to the conservative site The Federalist and confirmed to POLITICO show Morgan’s tweet hailed the efficacy of the border wall, saying that “every mile helps us stop gang members, murderers, sexual predators and drugs from entering our country.” 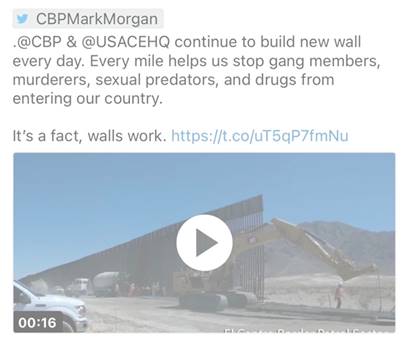 A Twitter spokesperson confirmed that Morgan had been locked out of his account but said “the decision was reversed following an appeal by the account owner and further evaluation from our team.”

Back online after Twitter lock out for ~20 hours. @Twitter’s censorship should outrage every American. Not only did Twitter block me from posting, they BLOCKED YOU from the TRUTH.

In Thursday’s news conference, Morgan listed off numerous other tweets he’d sent throughout October using similar language to highlight accused and convicted criminals the agency had apprehended, noting that none of them had ever triggered Twitter’s ban on hate speech.

He noted that the platform’s CEO was testifying on Capitol Hill on the very same day his account was frozen, facing a grilling from Republican senators about their longstanding allegations that social media giants are biased against and censor conservative speech.

“Ironically as they’re having a hearing on Capitol Hill on this very issue, Twitter employees were actively censoring another administration official,” Morgan said.

“This should outrage every American citizen because they didn’t lock me out, they locked you out. They imposed their own ideology, their own belief system to justify keeping the truth from the American people because it didn’t fit the very obvious and transparent agenda,” he argued. “They may have locked my Twitter account but they’re not gonna lock my voice.”

The company has come under increased scrutiny for placing warning labels on tweets coming from President Donald Trump, cautioning that the messages contained misinformation or glorified violence, but Democrats also argue that social media sites have not gone far enough to clamp down on the spread of hate speech and falsehoods on their platforms.

Earlier this month, conservatives ripped the company for blocking users and locking accounts posting links to a disputed report in the New York Post alleging ties between Democratic presidential nominee Joe Biden and his son Hunter’s business dealings, a move it quickly reversed and called a mistake.

Platforms such as Twitter, Facebook and Google have drawn threats from lawmakers on both sides of the aisle to either shape up or face greater regulation, including having their prized liability protections revoked.

Morgan highlighted tweets from Iranian Ayatollah Ali Khamenei that conservatives have complained would appear to violate Twitter’s policies against glorifying violence but which have not been slapped with warning labels like Trump’s tweets. Twitter CEO Jack Dorsey said in Wednesday’s hearing that the company viewed Khamenei’s tweets as “saber rattling” and not in violation of the site’s policies.

The commissioner called it “ironic” and “absurd” that “for some reason the ayatollah tweets out for the full and complete destruction of Israel and that’s OK, but me tweeting out about how effective the wall is and how it absolutely helps us apprehend criminals that try to illegally enter this country, somehow that is hate speech.”