Twitter is now censoring medical professionals with who they don’t agree. This is big tech tyranny!

Atlas’ tweet read “Masks work? NO” and preceded several others that questioned the use of face coverings in preventing the spread of the coronavirus. Atlas also used examples of areas where he had said ‘cases exploded even with mandates’ including Los Angeles, Miami, Hawaii, Alabama, France, Philippines, United Kingdom, Spain and Israel.

In a statement to the Hill, Twitter said the doctor’s tweet “was in violation of our COVID-19 Misleading Information Policy” that “prohibits sharing false or misleading content related to COVID-19 which could lead to harm.”

The White House coronavirus adviser added to his tweet, saying “‘That means the right policy is @realDonaldTrump guideline: use masks for their intended purpose – when close to others, especially hi risk. Otherwise, social distance. No widespread mandates. #CommonSense,” Atlas wrote. 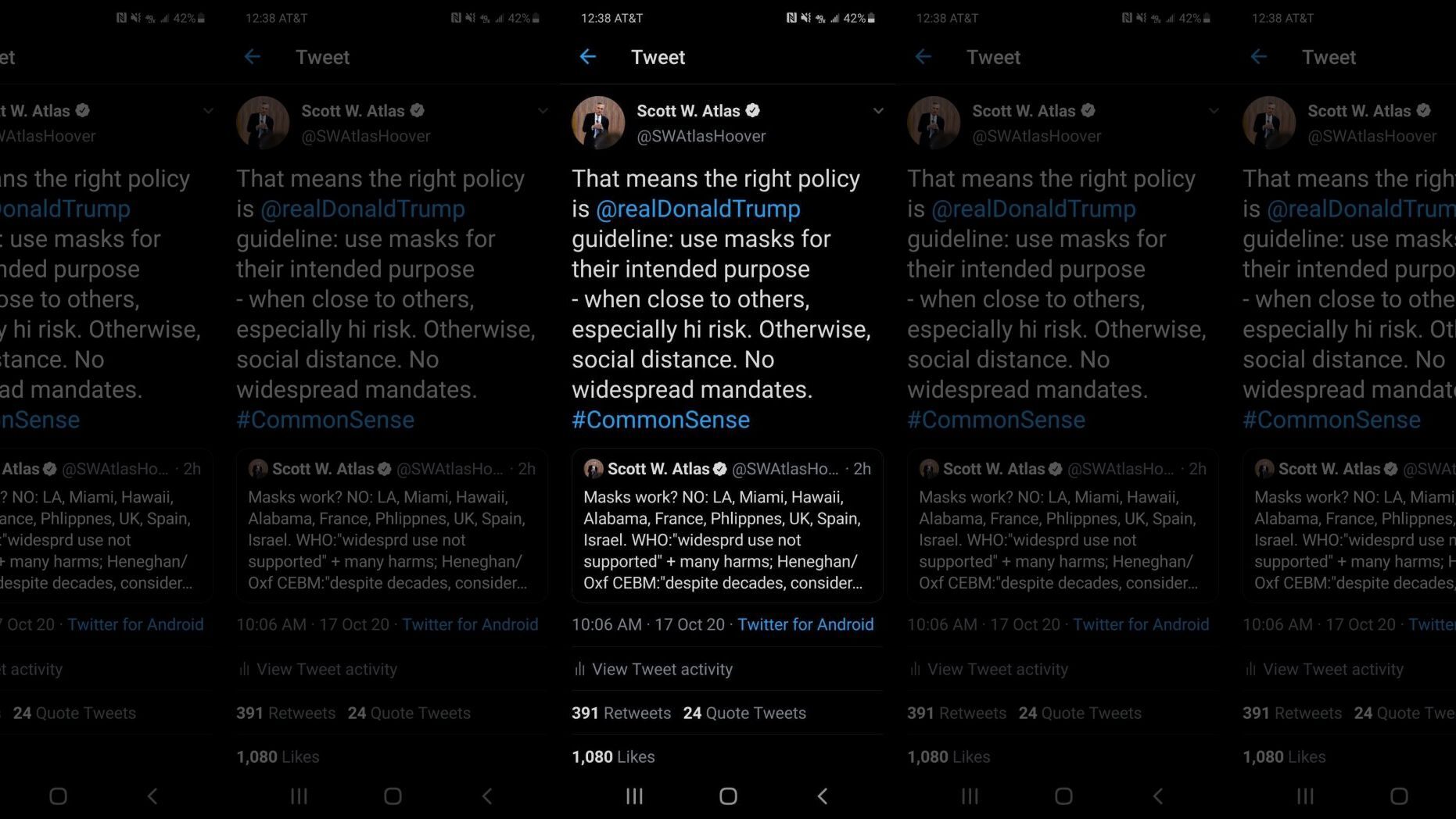 The removal of Atlas’ tweet is the latest in a series of actions the company has taken to either remove or flag posts by members of the Trump administration, including the president himself, that it says are misleading or false when it comes to issues ranging from the coronavirus pandemic to the upcoming presidential election.

The flagging or removal of tweets or other social media posts has taken on a heightened level of scrutiny from conservatives since both Twitter and Facebook last week took actions to halt a New York Post article centered around Hunter Biden – with GOP lawmakers in both the House and Senate decrying the move as censorship and calling on both companies to explain themselves before Congress.

Twitter’s removal of Atlas’ tweet is also not the first time the medical professional has run afoul of big tech.

In September, a video of Atlas questioning the need for universal social distancing measures was removed from YouTube for violating community standards.

Atlas, who supports a full reopening of the economy, filmed an in-depth interview with the Hoover Institution where he discussed the possibility of allowing natural immunities to control the virus.

Atlas lashed out at the massive video platform during an interview with Fox News’ Tucker Carlson – saying that YouTube was “censoring science.”

“It’s a disaster,” Atlas said. “We’ve already seen the near obstruction of journalism. When you start censoring science you are removing fact, removing the basic way that we decide what is truth in what is not. This has been done I think historically in various countries and you know, we are sort of teetering on the edge of what is done in third world countries — the countries we used to be proudly distinguished from,” Atlas said.

Atlas has become one of the most controversial members of the White House coronavirus task force and has been frequently at odds with Dr. Anthony Fauci, another task force member and director of the National Institute of Allergy and Infectious Diseases, over a range of issues relating to the pandemic.”