Eric Trump literally just came to the rescue. This is awesome.

“After someone burned a ‘Trump 2020’ flag flying outside of his house, Gus Klein says he sees his Burlington, Vermont, neighborhood in a whole new light.

“It does make me sad,” Klein said, according to NECN. “I’m going to be 58 years old, and I’ve never seen something like this before. I’ve always lived in this area.”

The veteran of the Afghanistan War told WCAX that after waking up on Sunday morning, he went outside to find a burned piece of fabric resting on his front porch. Then, Klein says, he “noticed that the flagpole was laying on the ground” and the flag wasn’t on it.

Now, Klein says, he is left worrying about his family’s safety. 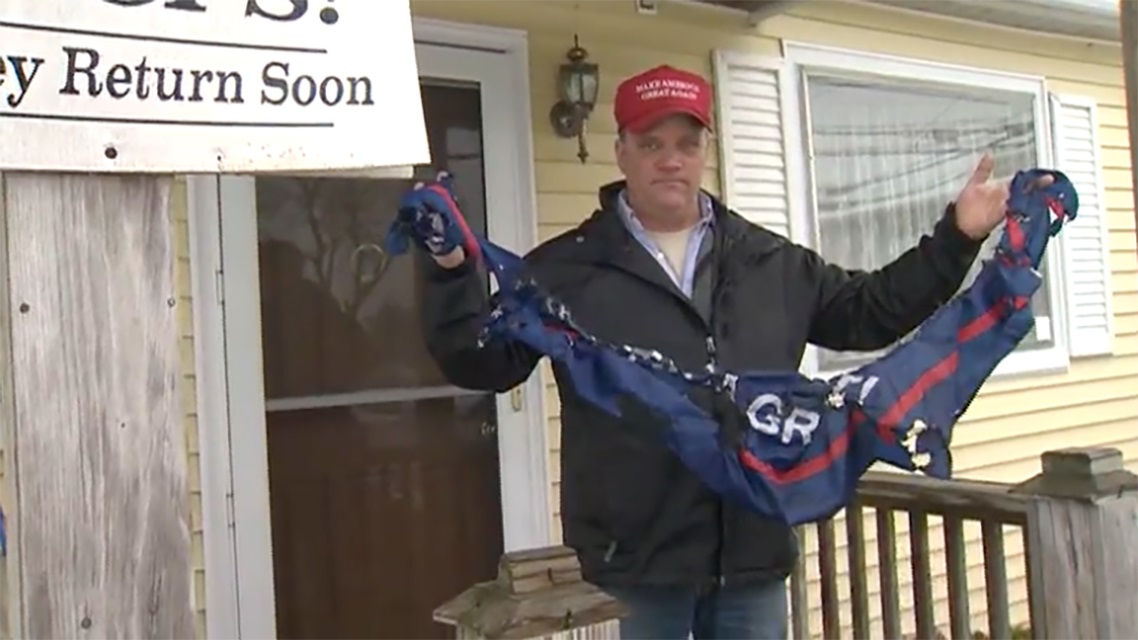 His wife, Annmarie Klein, told NBC5 in an on-screen interview that the vandalism highlights the tense nature of our county’s political discourse.

“It’s crazy,” she added, according to NECN. “To me, that’s violent. That’s bullying. It’s scary.”

Police say they are currently investigating the alleged flag burning, NBC5 reported, and the Vermont Democratic Party released a statement condemning the incident.

“It’s the level of respect with which we treat that difference that makes us Vermonters – that makes us unique,” it read, per NBC.

Last month, a Washington state man said someone burned his pickup truck because it had one bumper sticker that read “TRUMP 2020” and another that said “TRUMP: KEEP AMERICA GREAT! 2020,” according to The Washington Post.

Johnny MacKay, the owner of the truck, says someone also spray painted the word “Trump” on the side of his destroyed car, according to The Washington Post. The man told KOIN News that he didn’t intend for the bumper stickers to be taken so literally.

“I literally just put them on this weekend,” he said, according to KOIN. “If I would’ve known somebody would’ve taken politics this far — I saw them, I thought they were funny and apparently somebody didn’t get the joke.”

And in July, a group of interns for congressional Republicans called for an Uber ride to Trump International Hotel in Washington, D.C. — but the driver didn’t let them in.

Matthew Handy, an intern for Illinois Rep. Mike Bost, said it’s because he and another intern had red “Make America Great Again” hats. The 20-year-old told the Washington Examiner that he was just holding the hat in his hand and that he was not wearing it when he started to get into the car on Tuesday.

The driver asked Handy and Elijah Allison, who interns for Colorado Rep. Ken Buck, if they were holding the pro-Trump hats, Handy said. The pair confirmed that they were, Handy told the Washington Examiner, so the driver responded, “I can’t do the ride.” They then got out.

Adria Barrington, intern for Arizona Rep. David Schweikert, told Fox News that she was also with Handy and Allison when the driver kicked them out. She said that incident only pushes her to work harder for her conservative ideals.

Now here’s the cool part. Eric Trump literally just Tweeted Klein that a replacement flag is on the way.

“Gus – Your replacement flag is in the mail. If the person is classless enough to do it again just let us know – we will send you as many replacement flags as you need!”

Update: Gus – Your replacement flag is in the mail. If the person is classless enough to do it again just let us know – we will send you as many replacement flags as you need! ???????????? https://t.co/2XiEwiKJRm

Before that, Eric tweeted:

Gus,
Thank you so much for the support and thank you for your service to our country! Get us your address – a new Trump 2020 Flag will be coming your way! Keep up the fight! ????????????????????????#MakeAmericaGreatAgain ⁦@realDonaldTrump⁩ ⁦@LaraLeaTrump⁩ https://t.co/EuKSSnTk0W

Share if you think that was an awesome thing for Eric to do!