This is just too dang funny, LOL. Pelosi got a taste (or smell) of what’s happening all over San Franciso & liberal-run cities!

“The YouTube star who filmed himself defecating on the driveway of House Speaker Nancy Pelosi’s San Francisco residence said he did so as a “peaceful protest” — but admitted it was a “joke that got out of hand.”

The man, who identifies himself as “Mando” or “Armando” on his online channels and requested to have his last name withheld for fear of retribution, told The Post that the incident started with a joke from commenters on his livestream.

He began the channel after he became homeless six years ago, and hoped to show his viewers the realities of living on the street as he traveled from city to city.

But recent coronavirus-related lockdowns made daily life increasingly difficult, Mando said — especially when businesses are closed to customers and no longer allow people to use their bathrooms.

As a result, Saturday’s livestream video, titled “Poopalosi,” began as a protest against a lack of resources for people living on the streets — while people in power, such as Pelosi, are able to get haircuts and live their daily lives fairly unchanged.

“I’d been hunting for a toilet all week, and the joke came up in the comments on one of my streams that ‘Hey, you should take a crap at Pelosi’s house,’” Mando told The Post.

“Everyone was enjoying the idea of it, and eventually I just couldn’t hold it anymore.”

In the video, Mando can be seen wandering the streets of San Francisco in search of Pelosi’s home. Once there, he sets up a camera across the street and stands in what appears to be Pelosi’s driveway for several minutes.

He eventually salutes his viewers before squatting down to relieve himself on the pavement.

“That was for President Trump,” he says after exiting the frame.

I actually filmed a homeless person taking a dump on the street here in downtown Sacramento. It’s very common here.

#NancyChokesWhilePeopleGoBroke. Nancy Pelosi's district is a 100 miles from me. I saw this homeless person taking a dump a few blocks from the CA capitol building in downtown Sacramento. Pelosi wants us all to be relegated to this during the #coronavirus outbreak. ??? pic.twitter.com/IqDmBivnFq

Mando told The Post that the comment was meant to be “satire,” and that he’s “not really very political,” although he supports Trump’s accomplishments and is scared about rising crime and the state of the country.

“I fear America is becoming one big burned-down city,” he said.

Just a few hours after the incident, Mando said, he was stopped by officers with the Bay Area Rapid Transit Police Department, who detained him at the behest of Capitol Police, the agency tasked with protecting members of Congress.

“It was scary! I thought my life was over in that moment,” he said.

“They kept asking me, ‘Are you this? Are you that? Are you Antifa?’ And the Capitol Police were definitely watching my channel, because I could hear them on the radio like, ‘Tell him to turn off the stream.’”

A BART Police spokesperson confirmed the account, but said it did not have any further information. Pelosi’s office and Capitol Police did not immediately respond to requests for comment. 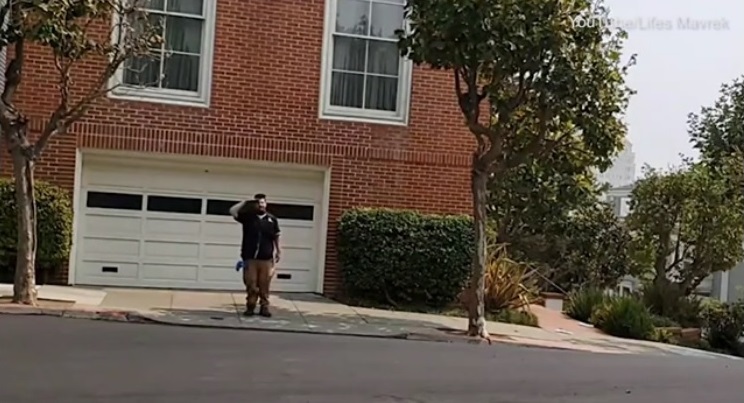 Immediately following the incident, Mando apologized to Pelosi on Twitter, saying, “@SpeakerPelosi I know you may not ever see this but I want you to know, I meant no foul harm yesterday when I did what I did. I’m not proud of it at all and I just would like for you to know that. I have no ill will against you or anyone in an elected officials position.”

Mando also told The Post that the act is “not something I’m particularly proud of,” and that he does not hold any ill will toward Pelosi or anyone else — although he hopes that his “peaceful protest” will inspire those in power to provide more resources for those who are homeless or otherwise down on their luck.

“What better way to show someone the message, you know?” he said.