Pretty sure Trump is gonna say “hell naw!” to this!

“Members of the “Honduran Migrant Caravan” marched to the U.S. Consulate in Tijuana on Tuesday and delivered a letter directed to President Donald Trump, demanding entry into the United States or $50,000 each to return home. They also requested the removal of military installations in Honduras.

Approximately 200 members of the caravan departed El Barretal camp in southeast Tijuana to the offices of the National Institute of Migration (INM) and later the U.S. Consulate General to hand deliver a letter outlining demands. The demonstration aimed to accelerate the process for migrants to request asylum and work in the United States. Security for the effort was provided by federal, state and municipal police, according to local reporting.

At the consulate, the migrant caravan was stopped by a team of riot police and were told to select a group of spokesperson to deliver the letter.

Local news outlets later received and printed a copy of the letter. 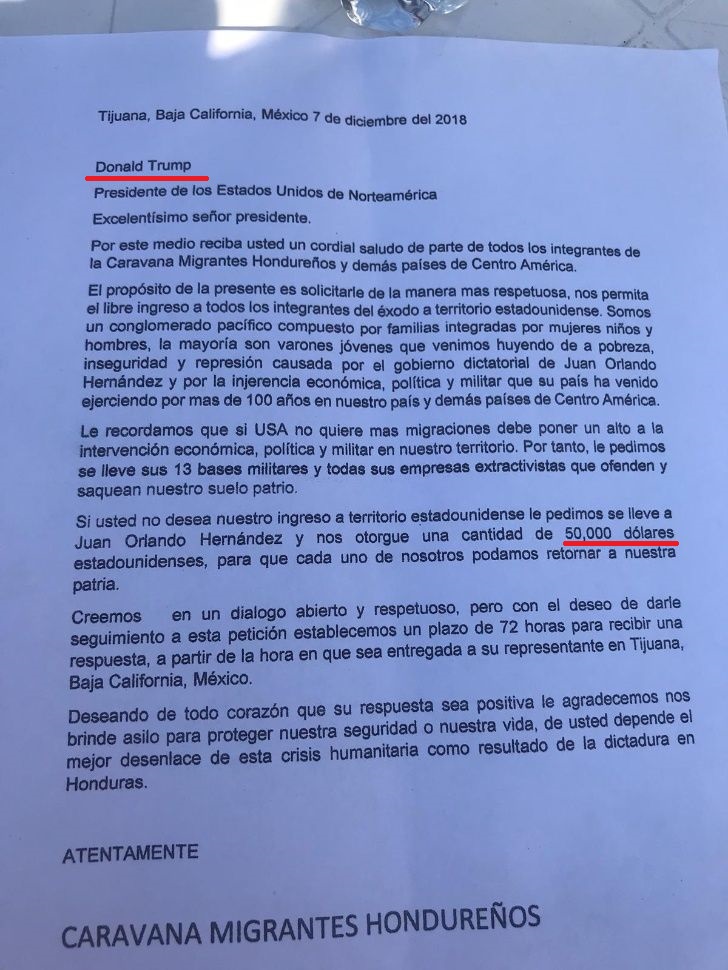 In sum, the letter requested passage into the U.S., noting they were fleeing poverty, insecurity, and oppression caused by the administration of Honduran President Juan Orlando Hernandez. They also decried economic, political, and military interference from the U.S. throughout Central America over the past century.

The letter states that if the U.S. wants migration to stop, it should remove its security and economic interests from the region, which includes 13 military installations. If entry is not granted, the migrants seek $50,000 USD each to return home. They also asked for the removal of the sitting Honduran president.

The letter is signed, “The Honduran Caravan Migrants,” and set a 72-hour time limit for a response.

You got it wrong Trump, we asked for jobs you responded with weapons. If asking for work is troublesome than I’m totally confused.

Don’t close your door employers. One day you will need me then I will remember the rejection. Entrepreneurs don’t turn your back on us. You know we both are the backbone of society.

“It may seem like a lot of money to you … But it is a small sum compared to everything the United States has stolen from Honduras,” according to a Fox News report.”

That’s a big NOPE from me!

Share this if you don’t want one dollar spent on them!