This is some absolutely hilarious karma. Rapper 21 Savage was arrested by ICE agents in Atlanta just prior to the Super Bowl. Savage posted “F-CK TRUMP” on his Facebook page a month before the 2016 election, and now he is being held for being in the country illegally, and for being a convicted felon.

“Rapper 21 Savage, who claims to be from Atlanta’s Zone 6, has been arrested by the U.S. Immigration and Customs Enforcement (ICE).

The rapper held Back 2 School events in 2018 in what he claimed was his neighborhood.

As the @Patriots & @RamsNFL prepare to battle for the right to hoist the Vince Lombardi trophy as #SBLIII champions, ICE HSI will be playing its best defense to protect the fans who will be in #Atlanta for the biggest sporting event of the year #SuperbowlLIII pic.twitter.com/6Gnkctj0k6

Mr. Abraham-Joseph initially entered the U.S. legally in July 2005, but subsequently failed to depart under the terms of his nonimmigrant visa and he became unlawfully present in the U.S. when his visa expired in July 2006. In addition to being in violation of federal immigration law, Mr. Abraham-Joseph was convicted on felony drug charges in October 2014 in Fulton County, Georgia.

Mr. Abraham-Joseph is presently in ICE custody in Georgia and has been placed into removal proceedings before the federal immigration courts. ICE will now await the outcome of his case before a federal immigration judge to determine future actions.”

Abraham-Joseph, 26, has claimed to be from Atlanta and has long been considered a local act. Just last fall, he gave free school supplies to more than 2,500 DeKalb County school students.

Cox said Abraham-Joseph is an “unlawfully present United Kingdom national” who legally entered the U.S. in July 2005 on a visa. His visa expired a year later, Cox said.

He was also convicted of felony drug charges in 2014 in Fulton County.

Abraham-Joseph has been placed in “removal proceedings before the federal immigration courts,” Cox said.

He performed in Atlanta as recently as Thursday in the Super Bowl Music Fest at State Farm Arena.”

An attorney for Savage said that the felonious rapper is a “role model:”

“We are working diligently to get Mr. Abraham-Joseph out of detention while we work with the authorities to clear up any misunderstandings. Mr. Abraham-Joseph is a role model to the young people in this country, especially in Atlanta, Georgia, and is actively working in the community -leading programs to help underprivileged youths in financial literacy.” 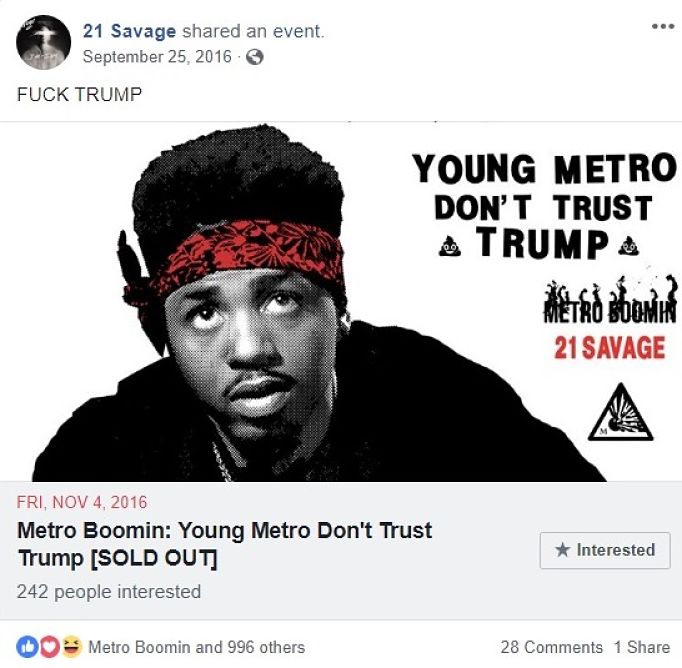 People reacted to the news on social media:

21 Savage: We got London on the track…
ICE: pic.twitter.com/TphzVwK73p

Pretty damn funny the situation he finds himself in. Hopefully they deport his ass!