“A federal judge in Los Angeles ordered pornographic actress Stormy Daniels on Tuesday to pay President Donald Trump $293,000 in lawyers’ fees and $1000 in sanctions following an unsuccessful attempt to sue him for defamation.

Daniels, whose real name is Stephanie Clifford, was ordered to pay 75 percent of the president’s legal fees in connection to the case, according to Trump lawyer Charles Harder. Earlier in December, Harder petitioned U.S. District Judge S. James Otero to make Daniels pay $800,000 in fees and other sanctions. The breakdown of the now-ordered payments is $293,000 for legal fees and $1,000 for sanctions.

In November, Otero tossed the adult performer’s lawsuit alleging defamation by the president — because he posted a tweet calling her story of a man threatening her in 2011 to keep quiet about her alleged Trump affair a “con job.”

“Harder had billed Trump $841.64 per hour to represent Trump in the case, while Harder’s co-counsels in the litigation charged the president anywhere from $307.60 per hour up to $756.49 per hour, CNBC reports.

“Charles Harder and Trump deserve each other because they are both dishonest,” Avenatti tweeted. “If Stormy has to pay $300k to Trump in the defamation case (which will never hold up on appeal) and Trump has to pay Stormy $1,500,000 in the NDA case (net $1,200,000 to Stormy), how is this a Trump win?” 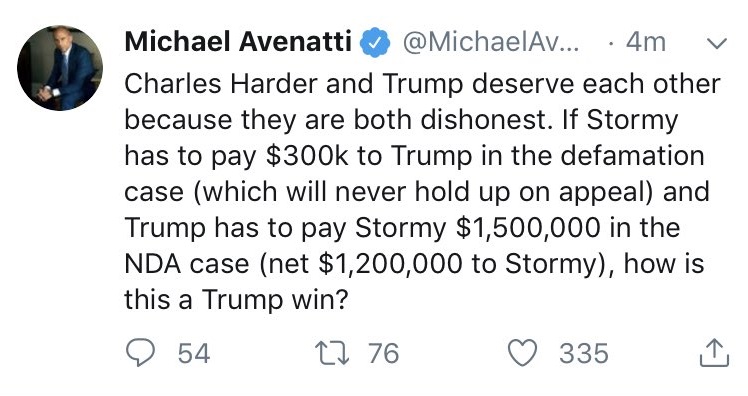 Daniels alleged she had a one-night affair with Trump in 2006. She sued him earlier this year seeking to break a non-disclosure agreement she signed days before the 2016 election about the alleged affair as part of a $130,000 hush money settlement. Trump has strongly denied the affair took place.

Despite the deal to stay quiet, Daniels spoke out publicly and alleged that five years after the alleged affair she was threatened to keep quiet by a man she did not recognize in a Las Vegas parking lot. She also released a composite sketch of the mystery man.

She sued Trump for defamation after he responded to the allegation by tweeting: “A sketch years later about a nonexistent man. A total con job, playing the Fake News Media for Fools (but they know it)!”

A sketch years later about a nonexistent man. A total con job, playing the Fake News Media for Fools (but they know it)! https://t.co/9Is7mHBFda

Stormy’s gonna have to do a lot of lap dances to pay off that chunk.