Wow! Coming on the heels of a California politician being arrested for spanking his kid, now we have this! The “perpetually offended” left is out of control!

“On Tuesday, in the middle of final exam week, a student from West Virginia University was sent an emailed letter from an assistant dean notifying him that he is “the subject of an investigation regarding alleged prohibited conduct.”

In the letter (attached below), Assistant Dean LiDell Evans informed Joseph Cortese, a fourth-year student, that he was required to attend a meeting on Friday concerning an investigation about a photo he posted on Instagram of himself dressed as a Border Patrol agent for Halloween.

“This letter serves to put you on notice that pursuant to section 9.2 of the Student Conduct Code and Discipline Procedure for the Main Campus of West Virginia University, you are the subject of an investigation regarding alleged prohibited conduct,” Evans wrote.

The email also informed Cortese that if he did not contact the office or attend the meeting, his student account would have a “hold” placed on it.

“I received this email Wednesday and have had awful anxiety since,” Cortese told The Daily Wire in an interview. “While I was trying to study for finals, this was looming on the back of my mind.”

“I know I didn’t do as well on my finals as I should have due to this,” Cortese added.

The email detailed that the complaint was received on November 6. The photo was posted before Halloween.

The photo, which Cortese agreed to share with The Daily Wire (see above), shows him handcuffing a female student who dressed up with him for Halloween. Cortese is wearing an Immigrations and Customs Enforcement black hat and a Border Patrol T-shirt, while the female is wearing what Cortese says is an alien costume with a piece of paper attached to her shirt that reads “illegal.”

Cortese, who is also the Communications Director for Students for Trump, said that during the meeting, Assistant Dean Evans told him the costume could be “misinterpreted the wrong way” but acknowledged that it was Cortese’s “constitutional right” to wear the costume.”

“The West Virginia University Office of Student Conduct received a complaint claiming the student was posting ‘vulgar hateful Instagrams’ but did not single out what was ‘vulgar’ or ‘hateful’ about them,” WVU said in a statement to The Daily Wire. “The Office followed standard procedure, including the timing, to follow up on the complaint and talk with the student. The Office tries to wrap up any matters before students leave campus at the end of each semester. No charges or disciplinary action was taken and the matter is now closed.” 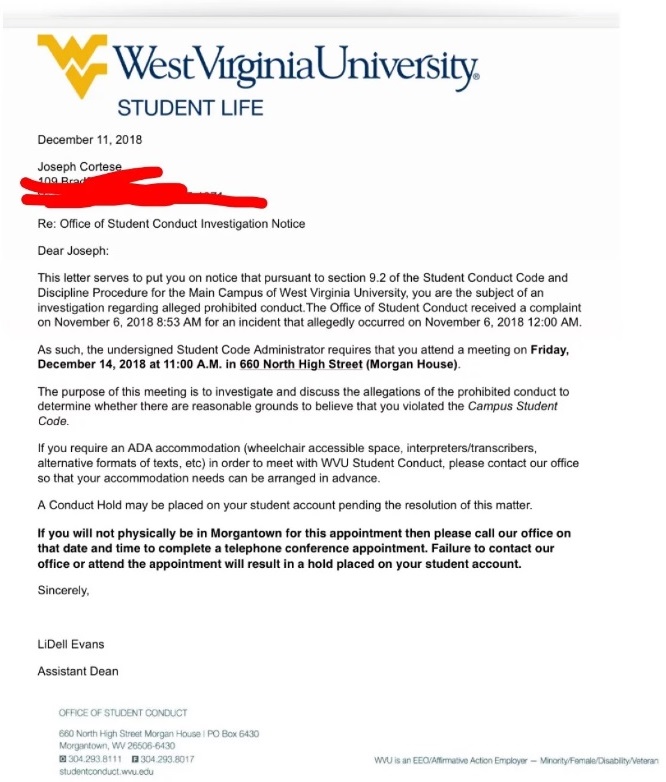 Be careful what you wear out there, folks. You might offend someone & they’ll cry about it.