A major earthquake has hit Anchorage. The first images and video are coming in on social media & it doesn’t look good. Sarah Palin’s home has been damaged, she’s reporting.

“Houses destroyed everywhere stores with tons of damage my house swayed 12 inches back and forth we had to evac… in lost everything as o speak and aftershock run for high grounds it’s still shaking like crazy.” (Used with permission)

Holcomb provided updates by saying that the “Anchorage airport is flooding as we speak,” and “Mass rush for gas mass rush at stores for food .. massive damage I have on my other phone.. gas leaks in homes everywhere. Multiple houses have exploded from gas leaks. Emergency services going in every direction aftershock after aftershock. Everyone’s panicking from tsunami warnings, mass rush on all services.”

“A tsunami warning was issued for a portion of Alaska after a 7.0 earthquake rocked the state on Friday.

This footage from our CBS affiliate @KTVA shows the scene from inside a courtroom during Friday's #earthquake: https://t.co/5ZA4WBt5ZT pic.twitter.com/P87LKgbZLr

The warning was in effect for Cook Inlet and the Southern Kenai Peninsula in Alaska.

“For other US and Canadian Pacific coasts in North America, the level of tsunami danger is being evaluated,” a post on tsunami.gov stated.

Hope everyone is OK. This my wife, son & dogs inside during the #earthquake in Palmer, AK. I felt it in Fairbanks. Just broken stuff at our house. #Wyze pic.twitter.com/LMP7U5FJxR

The President has been briefed on the earthquake near Anchorage, Alaska, and is monitoring damage reports. We are praying for the safety of all Alaskans!

Footage from Snapchat maps on the earthquake in Anchorage. pic.twitter.com/5TPoHfpT7N

An Associated Press reporter working in downtown Anchorage saw cracks in a 2-story building after the quake. It was unclear whether there were injuries.

“It was anarchy,” Brandon Slaton, a resident of nearby Kenai, Alaska, told the Associated Press. “There’s no pictures left on the walls, there’s no power, there’s no fish tank left. Everything that’s not tied down is broke.”

The National Weather Service issued a tsunami warning for the Cook Inlet and the Southern Kenai Peninsula shortly after the earthquake, but later canceled it. Police in Alaska’s Kodiak island community had told residents to head to higher ground. 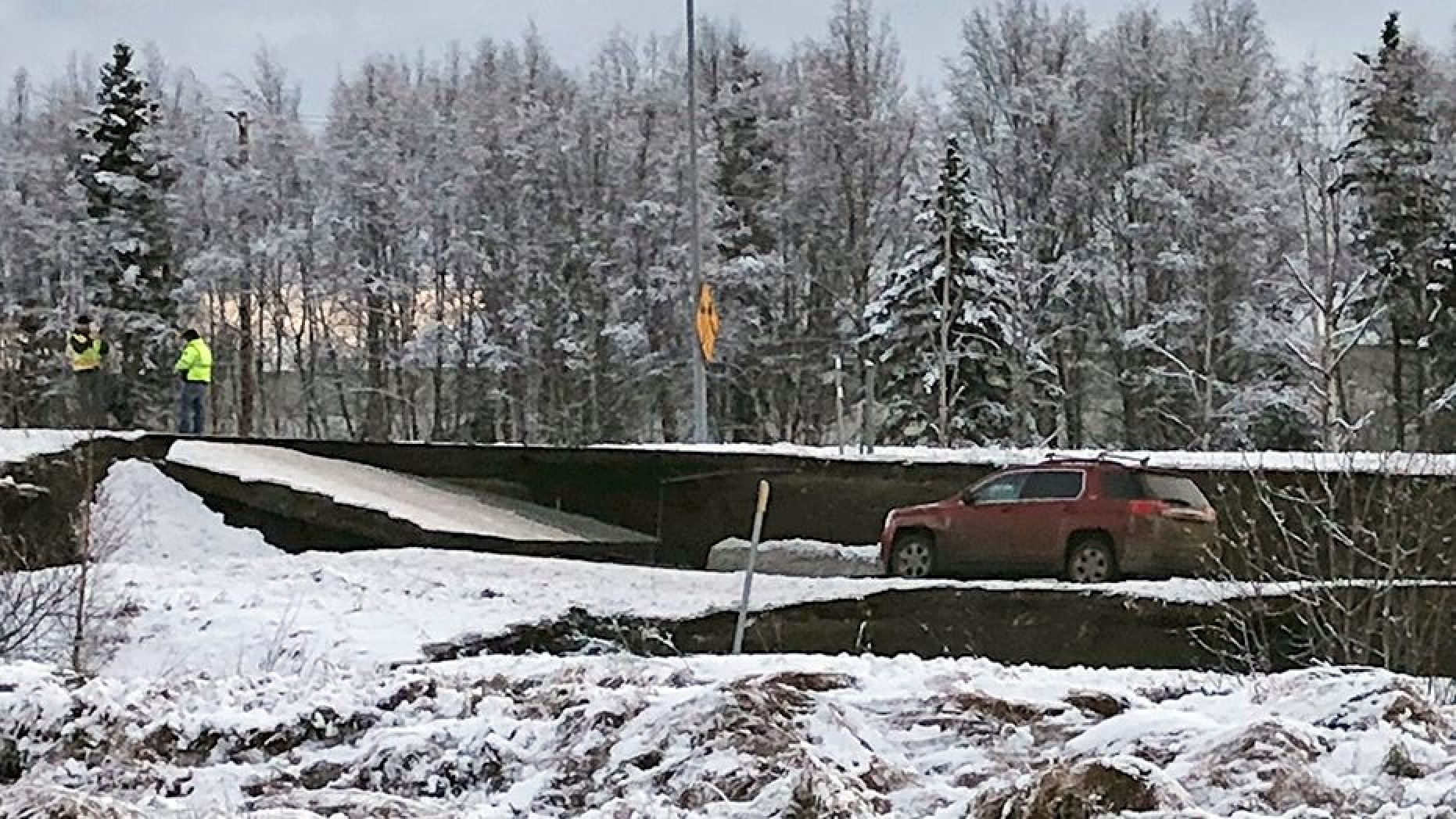 People went back inside buildings after the earthquake but a smaller aftershock a short time later sent them running back into the streets again.

Slaton was alone and home and soaking in the bathtub when the Alaska earthquake struck.

He said the quake created a powerful bath-and-forth sloshing in the bathtub and before he knew it, he’d been thrown out of the tub by the force of the waves.

His 120-pound mastiff panicked and tried to run down the stairs, but the house was swaying back and forth so much that she was thrown off her feet and into a wall and tumbled to the base of the stairs, Slaton added.

Oh my god this is Vine road. That earthquake was a real one. Stay safe anchorage fam ???????? pic.twitter.com/Ax8v6VzcIA

“Police in Alaska’s Kodiak island community have told residents to head to higher ground amid the tsunami threat. Kodiak is an island about 200 miles (321 kilometers) south of Anchorage.

An Associated Press reporter working in downtown Anchorage saw cracks in a 2-story building after the quake. It was unclear whether there were injuries.

People went back inside buildings after the earthquake but a smaller 5.8 magnitude aftershock a short time later sent them running back into the streets again.

There was just a MONSTER earthquake in Anchorage. I was getting coffee in a store at the time. Here's the shelves. pic.twitter.com/SqERuX7FRH

NBC affiliate KTUU was knocked off the air due to the quake, according to NBC News. A reporter at KTVA, a CBS affiliate, tweeted a picture of its damaged newsroom.

The Weather Channel is reporting:

“Social media images and videos showed cracked and collapsed roads, as well as cracks in the walls of buildings. It wasn’t immediately clear if there were any injuries.

“At Anchorage Daily News in Midtown, it sent cracks up walls, damaged ceiling panels and flung items off desks and walls, including a computer monitor and a fire extinguisher,” said the newspaper in its report.

The Anchorage School District sent an alert saying all children were safe and told parents to pick up their children when able, the Anchorage Daily News also reported.

Residents in Fairbanks, more than 350 miles from the epicenter, said they felt the shaking.

Ceiling is falling down pic.twitter.com/ZPY6fhEPrp

???????? for Alaska. Our family is intact – house is not… I imagine that’s the case for many, many others. So thankful to be safe; praying for our state following the earthquake.

To the Great people of Alaska. You have been hit hard by a “big one.” Please follow the directions of the highly trained professionals who are there to help you. Your Federal Government will spare no expense. God Bless you ALL!

This is a developing story. More images will be added.