As if we needed more crap in the schools. Some heads are going to roll (figuratively) over this one! I knew a Satan worshipper when I played in rock bands. That story after the school one, though.

The Daily Mail reported “Parents are outraged after finding out a California elementary school is allowing an ‘After School Satan Club’ on campus where there are children as young as five years old.”

The club was recently created at the Golden Hills Elementary School in Tehachapi, California, located in Kern County.

In an interview with KBAK, one parent described the decision to allow the club, founded by the Satanic Temple and the Reason Alliance, as ‘disgusting,’ while another called it ‘a mistake.’

That kind of reaction was expected, according to Paul Hicks, the man who will lead the club at the Northern California school.

‘We’ve already gotten threats against us,’ said Hicks, who is also a critical thinking professor. ‘As I would often say, there’s no hate like Christian love.’

‘I understand the school has to allow them because they allow other after school programs such as the good news, which is a Christian based after school program, that one I’m okay with, but I can’t imagine why anyone would want their child to attend this Satanic group,’ said Sheila Knight, a grandparent. 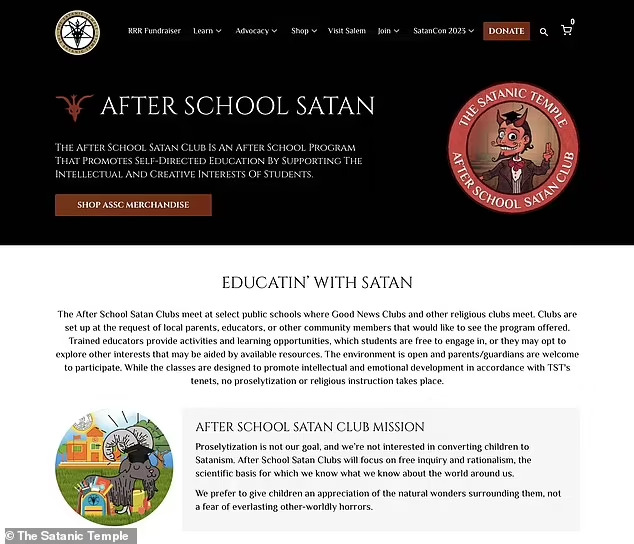 The club’s presence sparked outrage online with dozens of parents and community weighing in.

In a post made in the Techapi Asks, Rants, and Raves Facebook page, one man wrote that he believes the club’s organizers are being deceptive with their tactics and the motives.

‘So several people have told me that the new Satan after school club at Golden Hills elementary is not a religion, but a philosophy club … Then why did they choose Satan? Why not the Jean Paul Satre existentialism club? Why not the Descartes club?’ asked Joe Lathrop.

‘They put Satan in the name for a reason. People should stop being intellectually dishonest and just own up to the fact that they want kids to worship Satan as a secular god,’ the man continued.

‘Its just sick that they are targeting elementary school kids. Those are babies,’ wrote one woman.

‘The whole thing is a lark for a reaction,’ said a commenter.

‘The hypocrisy of the School Board..saying they have no choice…just try starting a Neo Nazi Club or a Pro Life Club and see how fast they run,’ said another person.

The club is meant to ‘educate children and encourage critical thinking,’ according to Lucien Greaves, spokesperson for the After School Satan Club.

Greaves says that in spite of the controversial name, the organization does not teach Satanism to children.

‘We keep religious matters out of the teachings of the after school Satan clubs and people often ask us, “well then why include Satanism at all, being that people are going to be offended by it?”

Despite the claim from Greaves, parents and family members of students say that the whole situation completely unsettles them.

‘Tehachapi said yes, and I think they made a mistake. I know my grandson will not be a part of this club,’ said Brenda Maher, another relative of a student.

In a statement released by the Tehachapi Unified School District, officials stated that it is against the law to discriminate against groups founded on Faith.

Hicks said it was the involvement of clubs like the Good News Club, already established on campus, that led to the decision to start The Satanic Temple endorsed group.

‘There’s currently a Good News Club there which is teaching kids to go save souls for Jesus, at the school. We want to give an alternative point of view,’ Hicks said.

FOX News host Tucker Carlson earlier this year spoke with Greaves live on air and quizzed him about the After School Satan Club and its teachings.

He asked if Greaves and other organizers have faced pushback from parents and school administrators or if they were ‘passive like everyone else in America, kind of just letting it happen.’

Carlson argued that school districts allowing the clubs could be potentially harmful and could open the door for other clubs like it.

Greaves argued back, saying that the club has every right to be on campus, just as much as the Good News Club.

A good friend of mine from when I played in bands was a Satan worshipper. He would literally pray to Satan out loud at work. It was crazy. We lost touch after I became a born-again Christian and was baptized in the Holy Spirit. The last time I saw him he literally ran away from me when I tried to talk to him. The demons had most likely taken over. Sad, but it’s real stuff.