At first I thought maybe Fox had given its digital staff a few weeks off for Thanksgiving. That would be super generous, but, pretty crazy, also.

I did a quick search for “Fox News Twitter” & found out the company may be boycotting the social media network because Twitter’s staff left Tweets with Tucker Carlson’s home address up for too long. You remember the leftwing protest that was at Carlson’s home earlier this month. Apparently, that’s partly how word of his home address got out. 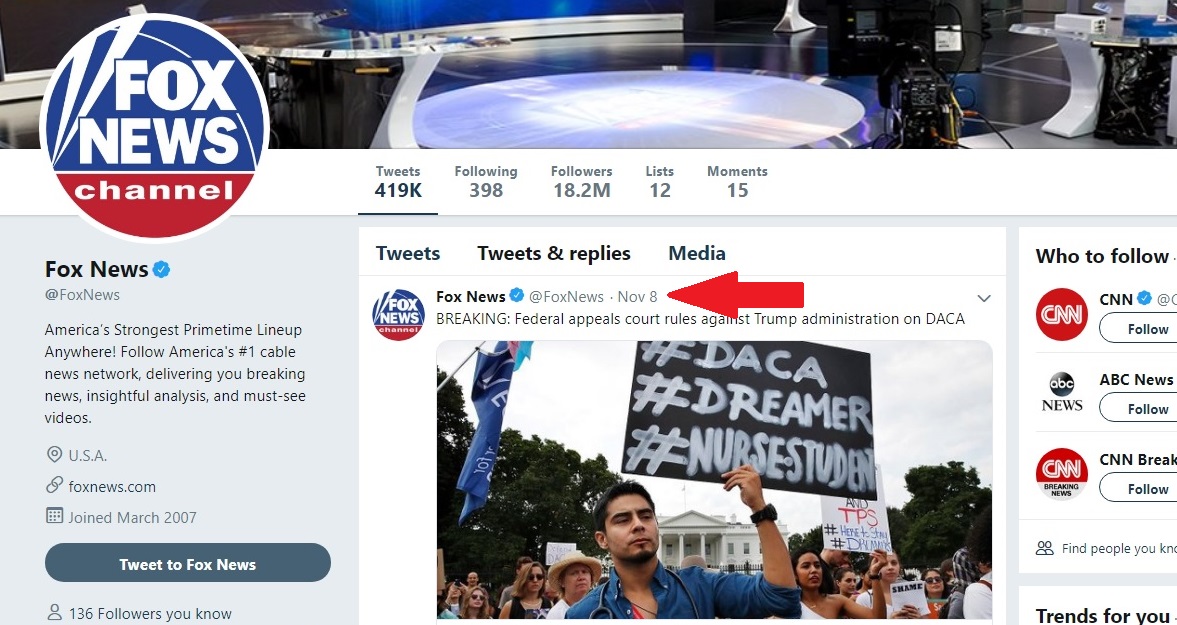 The Washington Examiner ran this story about 10 days ago:

“Fox News has stopped Twitter for almost a week after the cable giant reportedly began boycotting the platform.

The last message posted on Twitter by the official Fox News account is dated Nov. 8. Some of Fox News’ specific programs, however, have more activity on Twitter. The morning “Fox and Friends” show last tweeted on Monday. The noon program “Outnumbered” has continued regularly tweeting from its account.

Fox News’s Twitter account, @FoxNews, has more than 18 million followers. Before last week, it was typically posting messages with video clips and links to news articles on its own website dozens of times per day.

Most major news organizations use Twitter to share their content, potentially driving millions of news consumers to their website. The boycott has likely resulted in a substantial drop in visitors to foxnews.com’s news articles. A spokesperson for Fox News declined to comment.

The protest, according to an anonymous source in a report by the website Mediaite, was in response to Twitter having been slow to remove tweets by a liberal account that published the home address of Fox host Tucker Carlson, leading to a group of demonstrators congregating outside and knocking on his door.

Carlson was not home at the time, though he has said his wife was there.”

“Fox News continued its Twitter boycott for a fourth day on Monday in an apparent attempt to protest how the social media platform handled tweets surrounding a recent rally against Fox News host Tucker Carlson. Both the network’s main Twitter account as well as the accounts of some of its hosts remained silent Monday. However, other hosts and show accounts continued to tweet.

Fox News last tweeted on Thursday, and a number of accounts associated with the network stopped tweeting Thursday or Friday as well. The company hasn’t released any official statement over its Twitter absence, and a spokesperson declined to comment.

Multiple outlets reported over the weekend that the Twitter break was to protest the social media company’s slow response to requests to delete tweets that contained Carlson’s home address. Twitter didn’t immediately respond to a request for comment Monday.

Protesters visited Carson’s home last Wednesday to voice their opposition to his opinion pieces on the network, which in recent weeks included anti-diversity screeds and commentary blaming the Democrats for the migrant caravan. Carlson later claimed that protesters had broken his front door and were threatening him and his family — something that has been disputed by observers and hasn’t been corroborated by a police report about the incident.

The dispute with Twitter seems to center around another part of the incident: Protesters filmed a sign featuring Carlson’s home address and posted the video online. Twitter has since removed the video in question, but reportedly didn’t do so right away.

Business Insider reported over the weekend that Fox News had asked its digital staff to stop posting on Twitter as well. However, the blackout doesn’t seem to extend to all of the network’s hosts and shows: Both Sean Hannity and “Fox & Friends” continued to tweet on Monday.”

That’s some amazing loyalty Fox is showing for Tucker. Imagine if everyone boycotted Twitter for its treatment of conservatives. They’d make a lot less money on advertising!

Share this if you think it’s Awesome Fox is doing this!