If you haven’t heard the viral news yet, Air Force veteran Brian Kolfage who lost both legs & an arm in the Iraq War started raising money to build President Trump’s wall this week. Within four days, Airman Kolfage has raised $13 million for construction of the wall. The veteran Airman has been interviewed on numerous news outlets as his story continues to grow.

With all of the attention on Kolfage’s wildly successful efforts to keep criminals & drug dealers out of our country, the left was sure to attack the triple-amputee vet. And attack him they are. Some in ridiculous fashion. Take has-been actress Alyssa Milano for instance.

After hearing of Kolfage’s wall fundraiser, Milano decried him & others for trying to get a wall built instead of helping veterans.

It was lost on the actress that Kolfage is a wounded veteran who in fact raises a lot of money for his fellow injured vets. Milano was quickly shut down by actor James Woods who pointed that out to her. You can read that awesome story here.

Seeing that Kolfage, with the help of patriotic Americans, is well on his way to funding the border wall, some outraged libs decided to hold a fundraiser of their own, to provide migrants with ladders so they can illegally jump Trump’s wall.

A transgender anti-Trump activist started a GoFundMe campaign titled “Ladders to Get Over Trump’s Wall.” So far the campaign has raised $95,000. A far cry from the $13 million that Kolfage has raised, but hey, they’re trying.

The LGBT transgender activist who started the ladder fundraiser, Charlotte Clymer, is actually an Army vet. Clymer posted a call for people to donate towards the ladders on her Twitter account. Oddly enough, Alyssa Milano actually retweeted Clymer’s post to her 3.5 million Twitter followers. Because of course, Milano is anti-Trump and pro-illegal immigration. 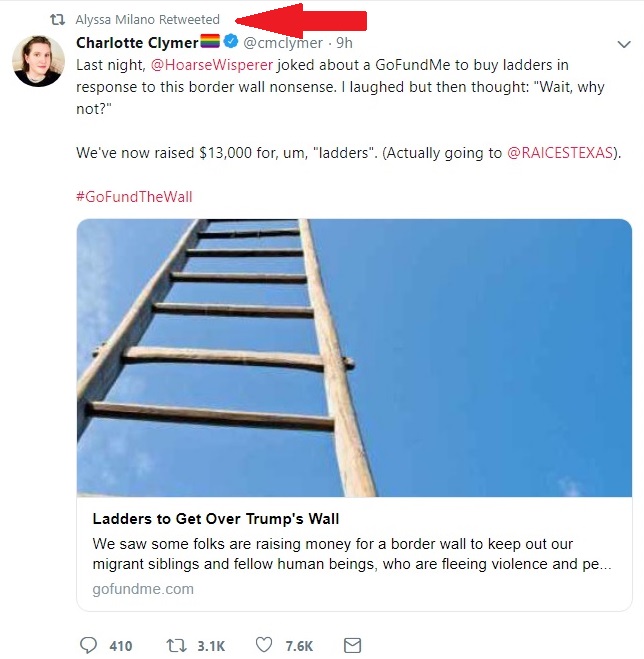 Airman Kolfage, who is actually a good friend of mine, hilariously struck back at Clymer’s effort to help foreigners break the law by jumping the wall.

Kolfage Tweeted, “I’m kind of upset with the liberal campaign to counter the wall. Their ladders are NOT ADA accessible. I thought you guys cared about everyone?! EPICFAIL #GoFundTheWall”

I’m kind of upset with the liberal campaign to counter the wall. Their ladders are NOT ADA accessible. I thought you guys cared about everyone?! EPICFAIL #GoFundTheWall https://t.co/uHdeeSUN97

By ADA, Airman Kolfage was referring to the Americans with Disabilities Act. Clymer’s ladders are not accessible to disabled Americans, or illegals for that matter! To be a “caring” liberal & comply with federal law, Clymer will have to fund escalators or elevators that go over the wall! Even then the trans-activist will still be breaking the law by helping people enter the US illegally! Not only could Clymer be sued for ADA non-compliance, he could go to prison for a very long time! Sucks to be you!

RELATED: Triple-Amputee Vet Raises $10 Million For Trump’s Wall In 3 Days, Now Even The ‘Enemy’ Is Helping

Clymer has also made anti-Republican remarks on her Twitter, stating that under Trump the party is anti-woman and white supremacist.

“If you support a party that is anti-LGBTQ and anti-woman and xenophobic and white supremacist because you think your taxes are too high, you are not “socially liberal”.”

If you support a party that is anti-LGBTQ and anti-woman and xenophobic and white supremacist because you think your taxes are too high, you are not "socially liberal".

Glad you got that off your chest. Hope you feel better.

Despite the left attacking Airman Kolfage & his effort to keep Americans safe, the amputee vet will not be deterred. His campaign is historic, and is getting bigger by the minute. Kolfage states on his wall fundraising page:

“As a veteran who has given so much, 3 limbs, I feel deeply invested to this nation to ensure future generations have everything we have today. Too many Americans have been murdered by illegal aliens and too many illegals are taking advantage of the United States taxpayers with no means of ever contributing to our society.

I have grandparents who immigrated to America legally, they did it the correct way and it’s time we uphold our laws, and get this wall BUILT! It’s up to Americans to help out and pitch in to get this project rolling.

“If the 63 million people who voted for Trump each pledge $80, we can build the wall.” That equates to roughly 5Billion Dollars, even if we get half, that’s half the wall. We can do this.”

Kolfage gave his legs & an arm for our freedoms, the least we can do is help him help ourselves by getting the wall built!

Share this if you love what Kolfage is doing & think libs should just shut their yaps!