We all saw the mass invasion force attempting to breach the border yesterday. Migrants clashed with Mexican authorities, threw rocks & projectiles at U.S. Border Patrol, and attempted to get through border fences.

Border agents responded to the violence by using tear gas on the criminal agitators.

“U.S. border agents shot several rounds of tear gas after some migrants attempted to penetrate various points along the border and threw what appeared to be rocks at U.S. authorities.”

It was super humane. No one died & everyone went back to the Mexican side of the border where they get free food.

“Some of these migrants attempted to breach legacy fence infrastructure…and sought to harm CBP personnel by throwing projectiles at them,” DHS Sec. Nielsen said in a statement. https://t.co/YP5cIFX5KZ pic.twitter.com/U0voEg1yAs

Of course, liberals were all up in arms about the use of tear gas on “peaceful” migrants and they started complaining about how Trump is a big meany, etc.

Here are some of the responses on social media.

What Trump is doing is illegal:
“Children screamed and coughed in the mayhem of the tear gas. Fumes were carried by the wind toward people who were hundreds of feet away, not attempting to enter the U.S.” https://t.co/hNZAGL7xbD

Jonathan Van Ness of Netflix’s series, Queer Eye said it was an attack on “children & families”

You tear gassed asylum seeking women and children. You knew for months they were coming, w all the power of the free world, you waited & lurked, politicized a humanitarian crisis, & then attacked children & families seeking the American Dream. https://t.co/iNmccHnqZI

Updated list of Nations that have used gas on civilians

This is horrendous. We must hold those responsible accountable. Children who approach our country looking for asylum should be welcomed with open arms, not with tear gas.

The problem with all the outrage from Dems is, it happened under Obama’s watch, also.

“Democrats are expressing outrage that U.S. border agents on Sunday shot rounds of tear gas at caravan migrants who threw rocks at law enforcement while trying to breach the U.S.-Mexico border. But critics hammering the Trump administration are glossing over a similar episode that occurred under then-President Barack Obama.

In 2013, during the Obama administration, Border Patrol agents reportedly used pepper spray to fend off a group of approximately 100 migrants who attempted to rush the same San Ysidro port of entry.

A San Diego Union-Tribune article at the time said agents fired “pepper balls” and used other “intermediate use-of-force devices” to repel the crowd. The migrants in that confrontation also reportedly threw rocks and bottles at U.S. authorities.

But with the national spotlight on Sunday’s caravan clash at San Ysidro, Democrats are lashing out at the Trump administration.

Ben Rhodes, the former Obama administration adviser, tweeted: “It’s wrong to gas women and children and the elderly. That shouldn’t be a partisan view nor should that be uncomfortable to ‘the men and women in duty.’”

It’s wrong to gas women and children and the elderly. That shouldn’t be a partisan view nor should that be uncomfortable to “the men and women in duty” https://t.co/PBHRE5utCT

Rhodes, in particular, faced online pushback over his comments from conservatives, who referenced the 2013 episode during the Obama years.

“Ben Rhodes was part of an administration that did the very same exact thing,” conservative commentator Stephen Miller said.

Ben Rhodes was part of an administration that did the very same exact thing. Ben Rhodes thinks you’re stupid. Don’t be a Ben Rhodes. https://t.co/M3C9XFn9Jn pic.twitter.com/v2P3BwyZuE

The Trump administration, meanwhile, defended the response on Sunday. Homeland Security Secretary Kirstjen Nielsen said in a statement some migrants “attempted to breach legacy fence infrastructure along the border and sought to harm [U.S. Customs and Border Protection] personnel by throwing projectiles at them.”

The criticism from Democrats follows other examples of liberals blasting Trump for things that also happened in prior administrations, including sending troops to the border, as Obama did in 2010.

In May, liberal activists and journalists also incorrectly shared pictures of children sleeping in enclosed cages from 2014 to take a swipe at the Trump administration and its zero-tolerance policy toward parents and children crossing the border illegally. Those photos were taken during the Obama administration.”

Benny Johnson had the best response. 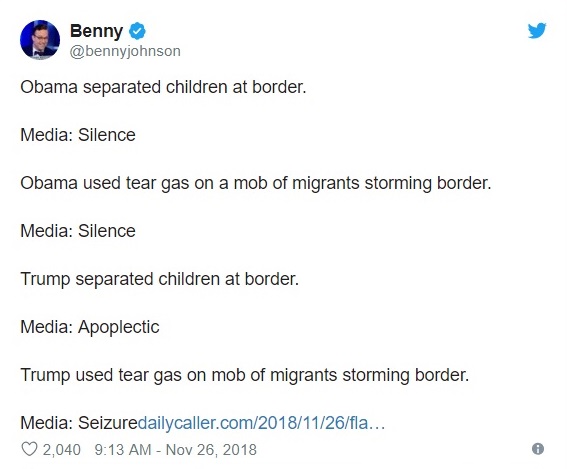 In short, according to Dems, if Obama did it, it was OK, if Trump does it, he’s literally Satan.

Can’t make this stuff up.