This is hilarious. Even the anti-Trump New York Times is calling Elizabeth Warren out. It appears “Pocahontas” shot herself in the foot with her own arrow.

Via the Daily Wire:

“On Thursday, The New York Times reported that one-time Democratic 2020 presidential frontrunner Senator Elizabeth Warren (D-MA) had fallen on hard times politically. Those hard times were brought about, according to the Times, by Warren’s bizarre decision to undergo a DNA test of her ancestry, then reveal that she could have been 1/1024th Native American:

But nearly two months after Ms. Warren released the test results and drew hostile reactions from prominent tribal leaders, the lingering cloud over her likely presidential campaign has only darkened. Conservatives have continued to ridicule her. More worrisome to supporters of Ms. Warren’s presidential ambitions, she has yet to allay criticism from grass-roots progressive groups, liberal political operatives and other potential 2020 allies who complain that she put too much emphasis on the controversial field of racial science — and, in doing so, played into Mr. Trump’s hands.

Herein lies the hilarious story of a white woman trying to pass herself off as a member of a minority group for the purpose of satisfying the intersectional base of the Democratic Party. Other Democratic politicians have merely paid lip service to intersectionality – politicians like Senator Kirsten Gillibrand (D-NY):

Female
Intersectional
Powered by our belief in one another.

And we’re just getting started.

But Warren went further. In an attempt to prove that she could compete with other minority candidates, she decided to go along with President Trump’s DNA challenge and spit into a cup for political benefit. The result: she looked patronizing and ridiculous.

Pocahontas (the bad version), sometimes referred to as Elizabeth Warren, is getting slammed. She took a bogus DNA test and it showed that she may be 1/1024, far less than the average American. Now Cherokee Nation denies her, “DNA test is useless.” Even they don’t want her. Phony!

It’s important to recall here that the media’s first take on Warren’s DNA test was that it had helped her – that she had showed her opponents just how honest she was about her ancestry. But thanks to the diffusion of media sources, that claim was debunked out of the gate. Now Warren’s being taken down by her own side.

Racial justice advocates, keen to cast race as a socially constructed issue with little biological grounding, said Ms. Warren’s actions gave validity to the idea that race is determined by blood, a bedrock principle for those who believe in racial hierarchies and castes…. In interviews, several progressives wondered if Ms. Warren’s decision to take the DNA test was indicative of a larger problem for several prospective presidential candidates: that their inner circles of advisers don’t reflect the racial diversity of the Democratic electorate.

Former advisors have come forward to complain about Warren’s judgment to the Times. And hard-core progressives are upset with Warren attempting to hijack the intersectional movement in order to forward her career aspirations.

So, what’s a rich, white, well-educated woman to do in today’s Democratic Party? Bow the knee, of course. But Warren has shown no inclination to do so thus far, and it’s not clear exactly how she could without undermining her own credibility. President Trump obviously trolled Warren into damaging herself, and now any attempts to bandage the wound risk opening it further.” 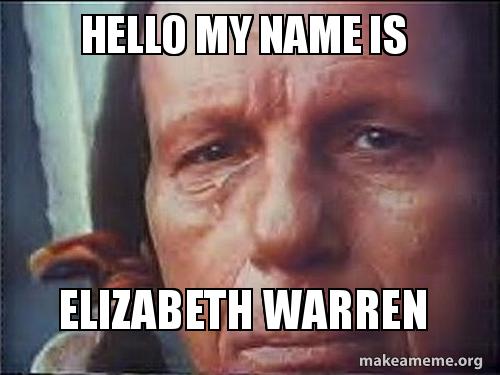 Share this if you hope this is the last we hear from her!