Since we started the rallies to free Marine Sgt. Andrew Tahmooressi from the Mexican prison on May 5th, word about his plight has spread. The May 19th national rally at Mexican consulates was the most successful so far. Concerned citizens signed up to rally at 21 Mexican consulates. Andrew’s family, including his mother, Jill, aunt Cindy, other aunts, uncles, & cousins all came out for rallies across the country. Jill has been featured on several national news shows also. Local news picked up on the national rally, further helping spread the word about Andrew’s imprisonment.

One major victory that came out of the May 19th rallies was a one day 10,000 signature increase on Andrew’s mom’s White House petition. If the petition gets to 100k signatures, the White House will respond. If President Obama says one word, Andrew will most likely be released by the Mexican government. Please sign the petition here. 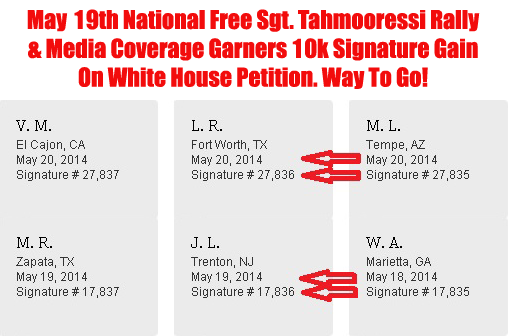 Thank you to all who have been involved with the rallies. We are planning another major rally for Saturday, May 31st.

Here are some pictures from the May 19th national rally. 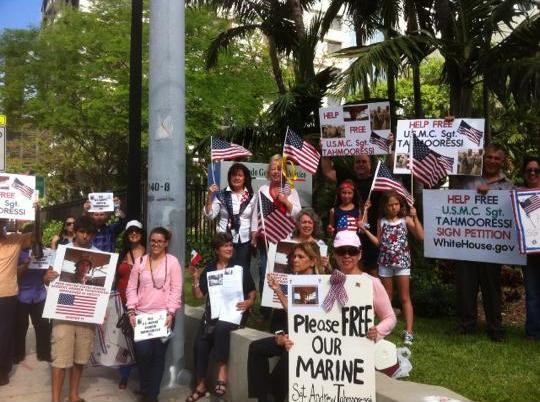 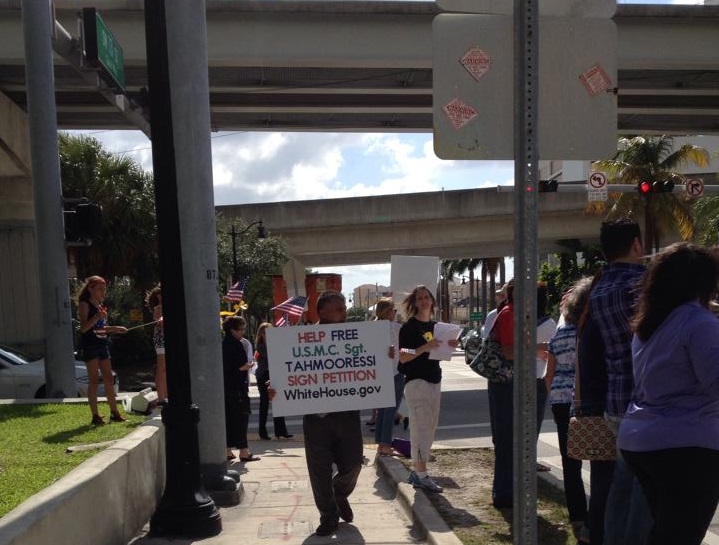 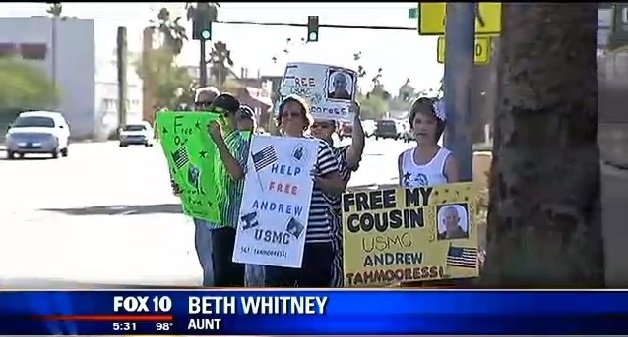 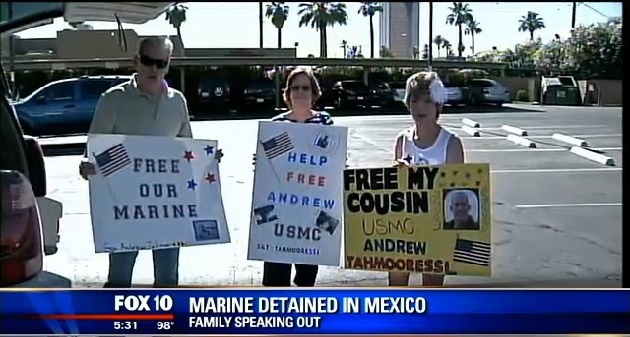 San Bernardino, CA. This group has been very active with the rallies. Below is an excerpt from the rally that Monique sent over to me. 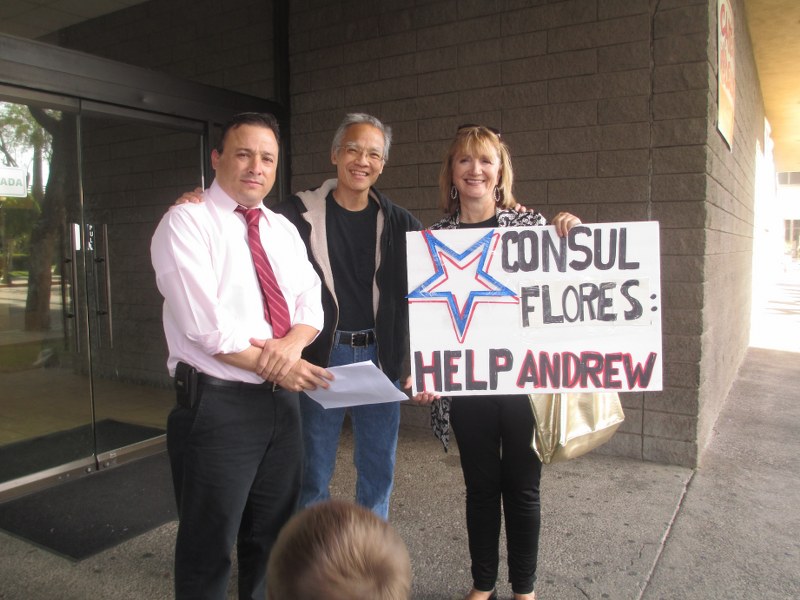 San Bernardino Mexican Consul of Political and Economic Affairs Jorge Alberto Leyva de la Pena met with the supporters and stated the consulate would forward photographs, the signed letter and the packet of information to Mexico. He distributed his telephone number and email address and stated he could be contacted directly in order to help. During the meeting, he stated that USMC Sgt was meeting with the U.S. Consulate staff members in Tijuana, and he said that USMC Sgt Tahmooressi is “not in the general population” of the prison. 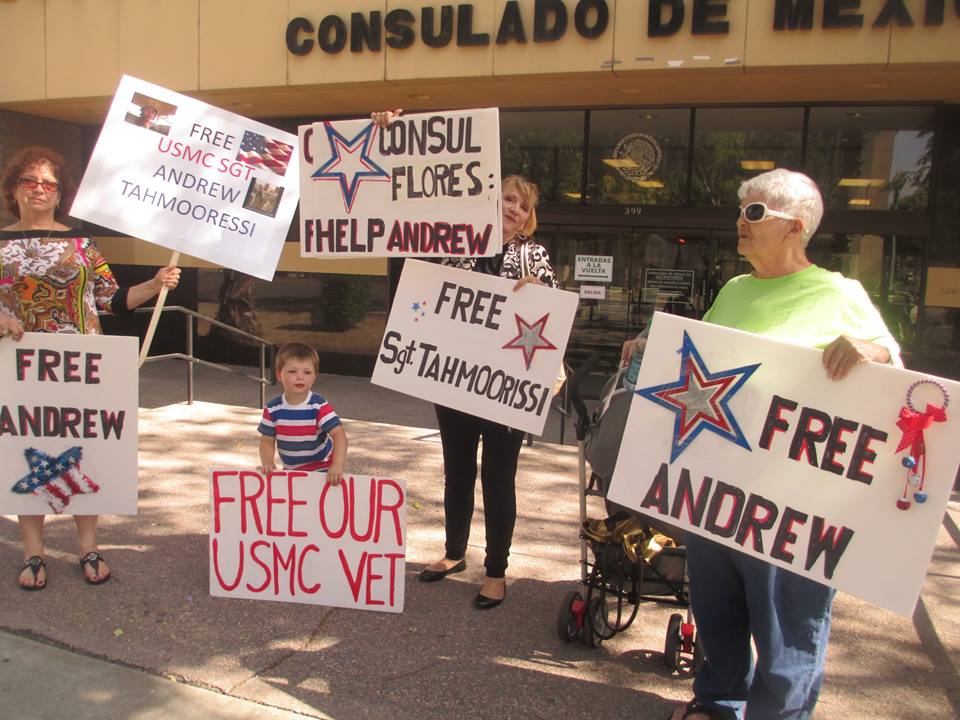 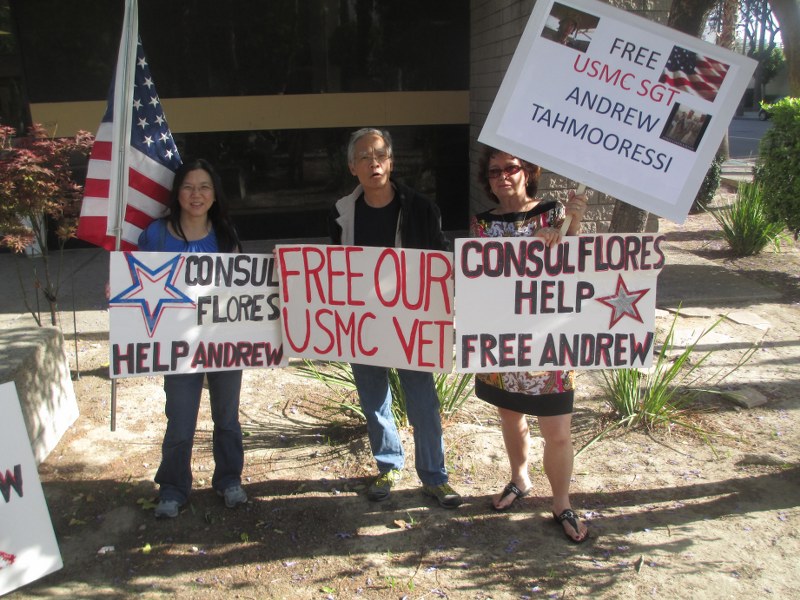 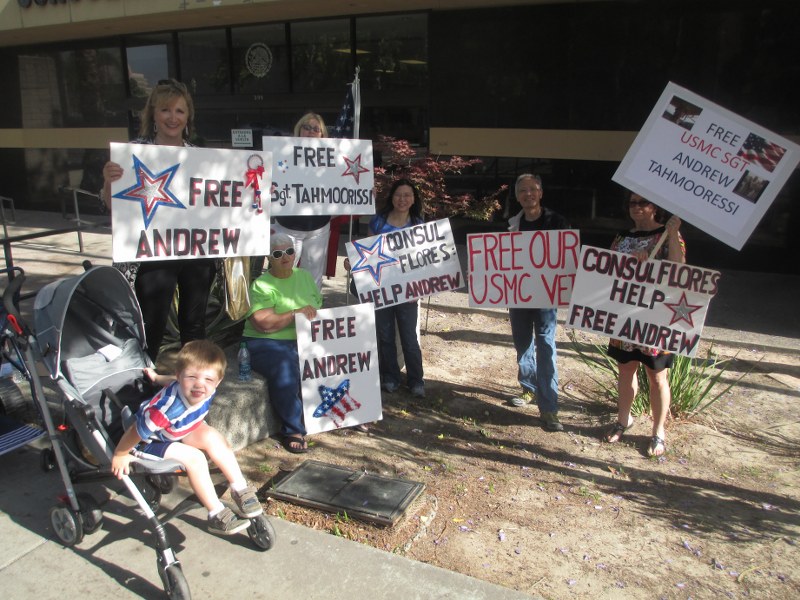 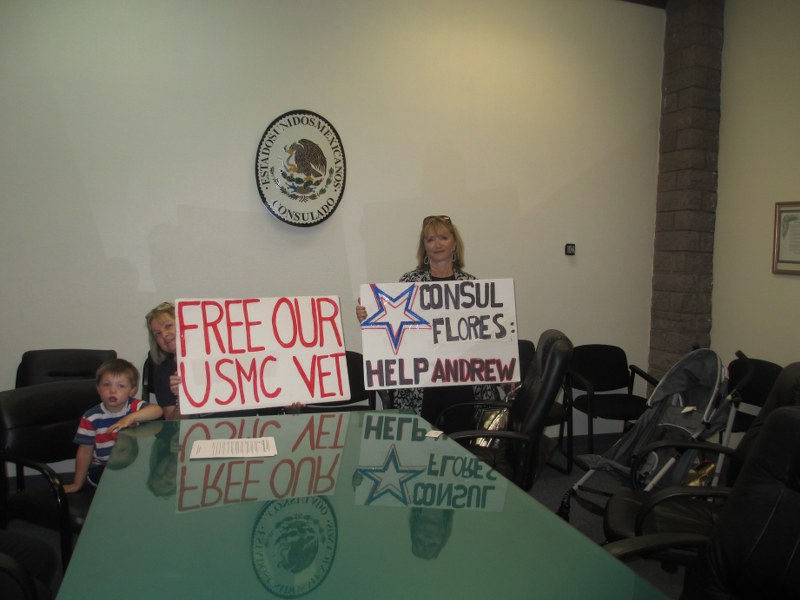 The consulate staff arranged for a meeting with Sgt Tahmooressi’s supporters in the conference room. 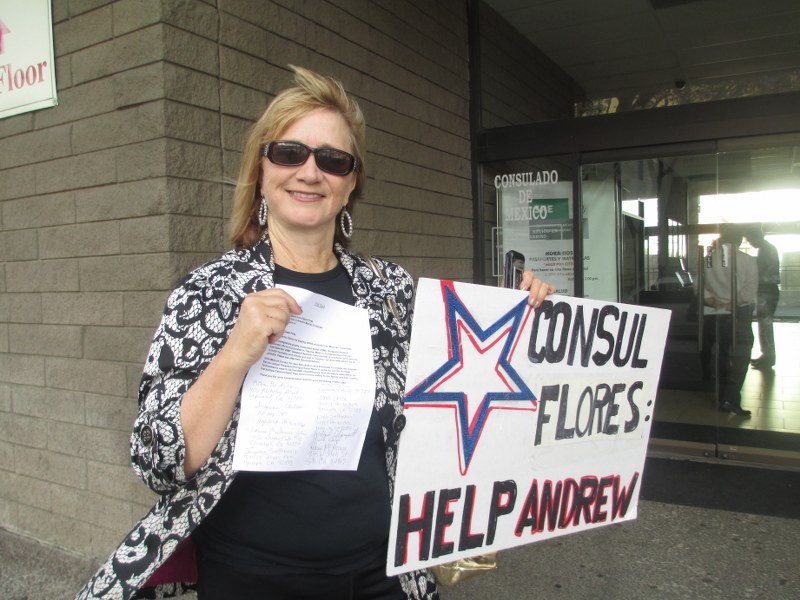 A letter to Consul General Flores, asking her to take action and contact the President of Mexico, was signed and presented in the meeting with the consulate staff members. 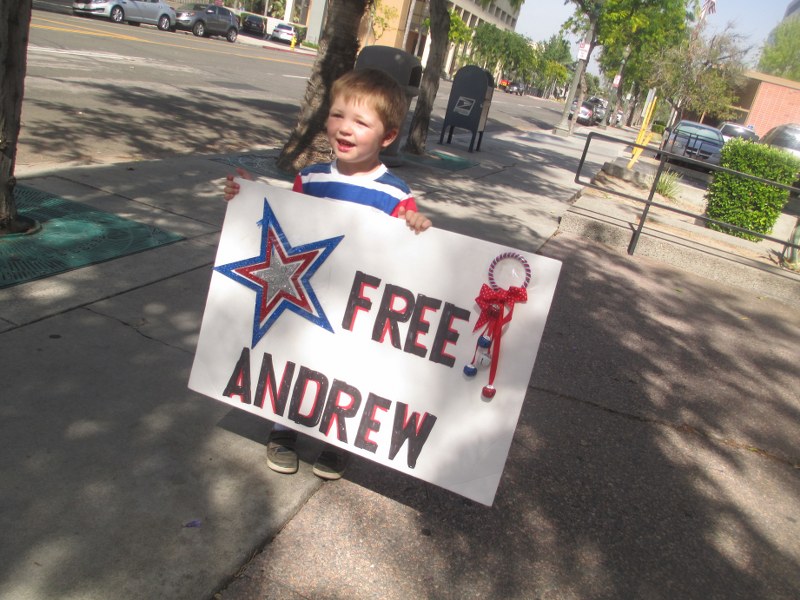 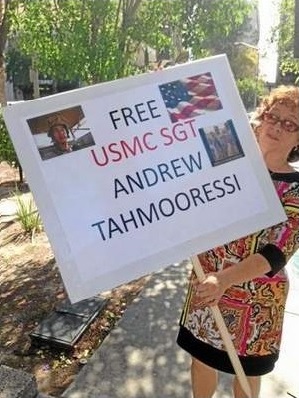 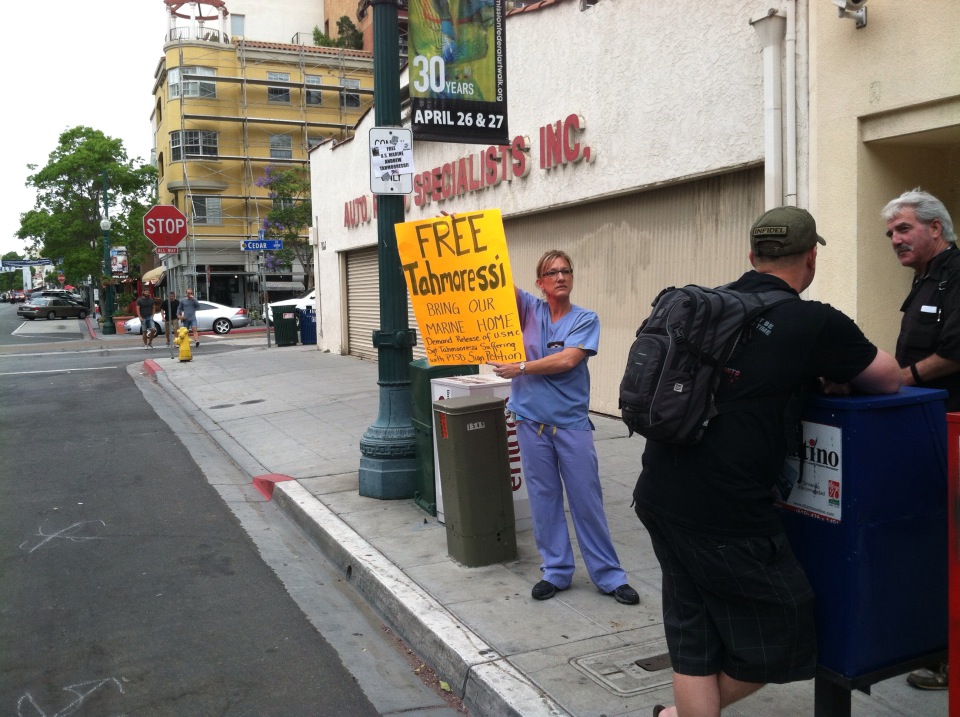 Monique Morales at the San Diego rally. Monique got President Obama’s attention with her sign when he was visiting San Diego a few weeks ago. 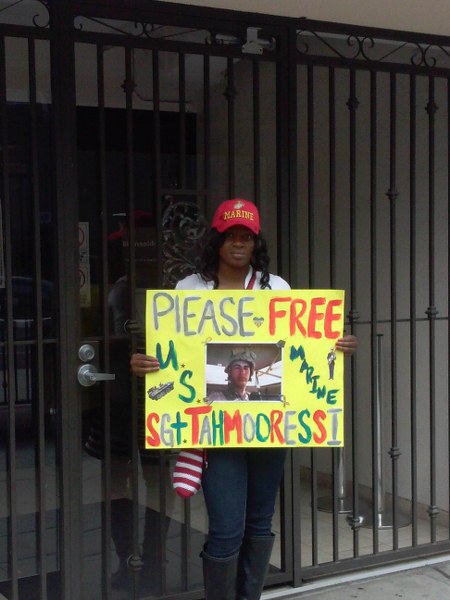 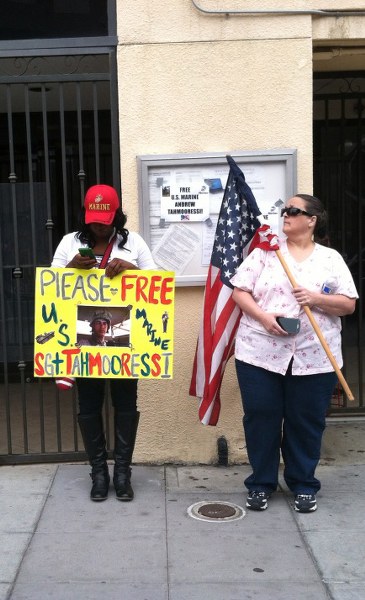 Monique printed out a flier that I had left on the Mexican consulate in Sacramento before our initial May 5th rallies. She posted them everywhere! Awesome! 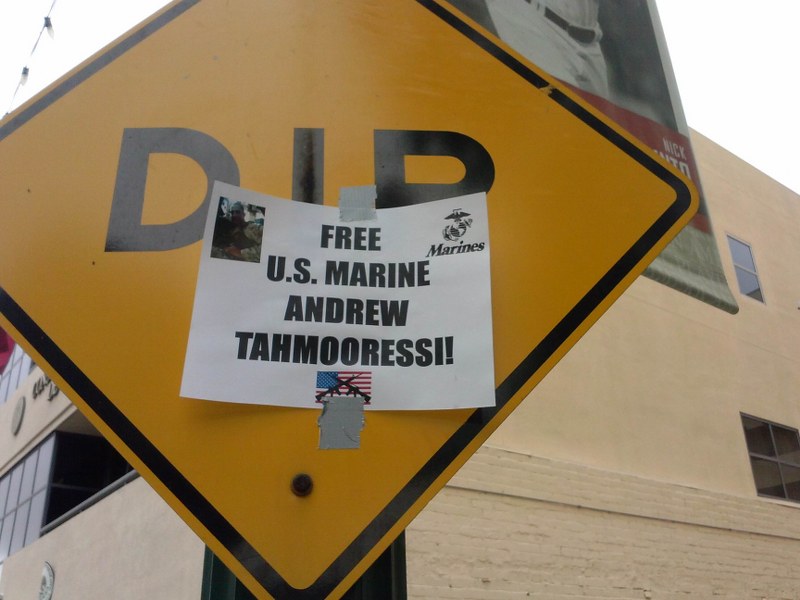 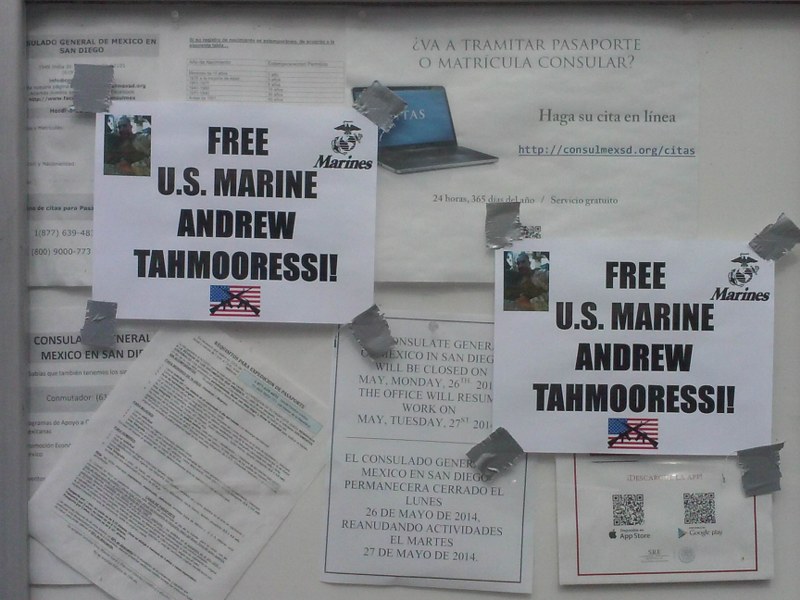 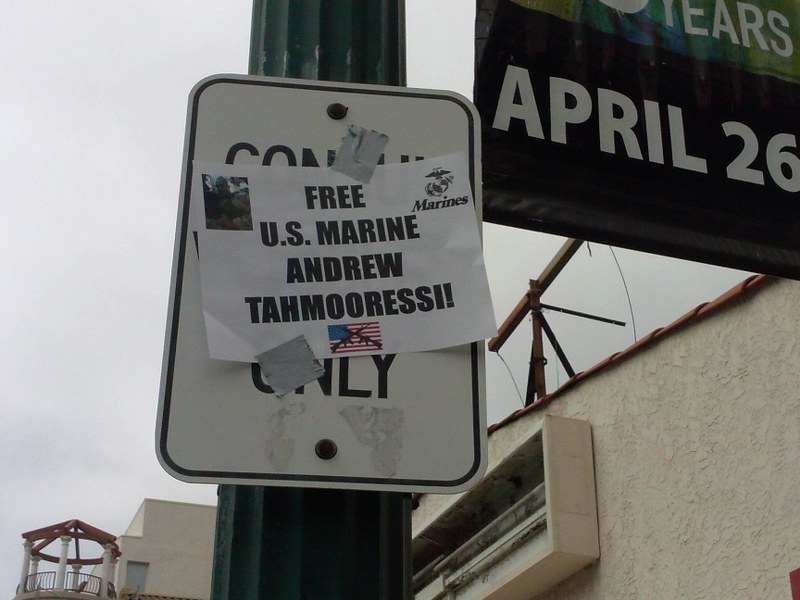 Joey put one of the fliers on his truck. 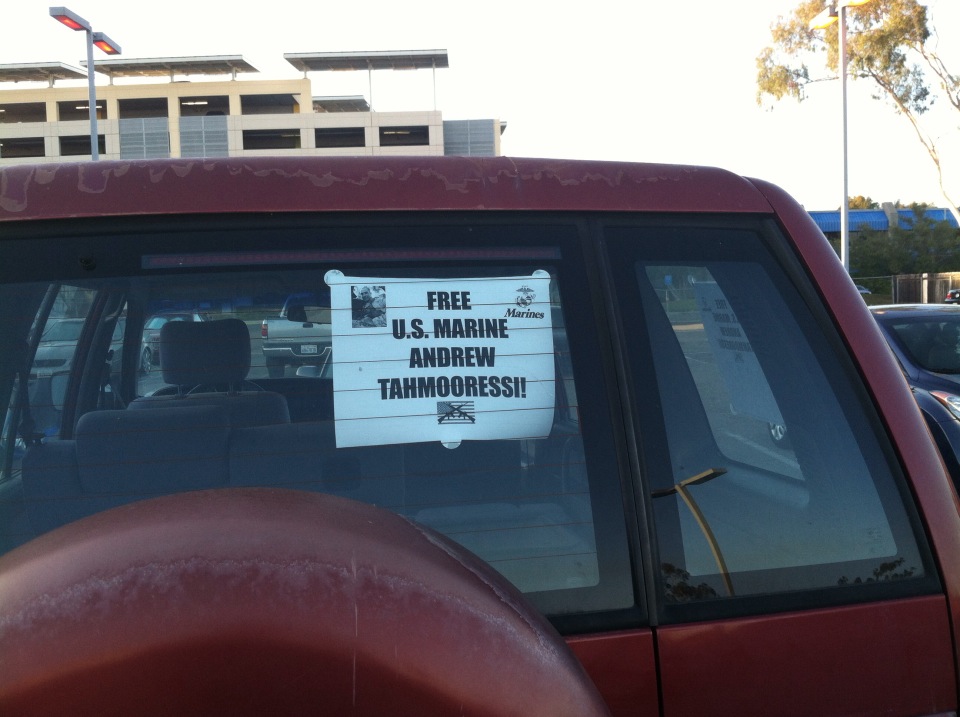 I was the lone ranger at the Mexican consulate in Sacramento. I did get to speak to the consulate’s advising attorney who said he would pass information on about Andrew to the appropriate officials. Tony, a Navy vet who was passing by took this pic of me. 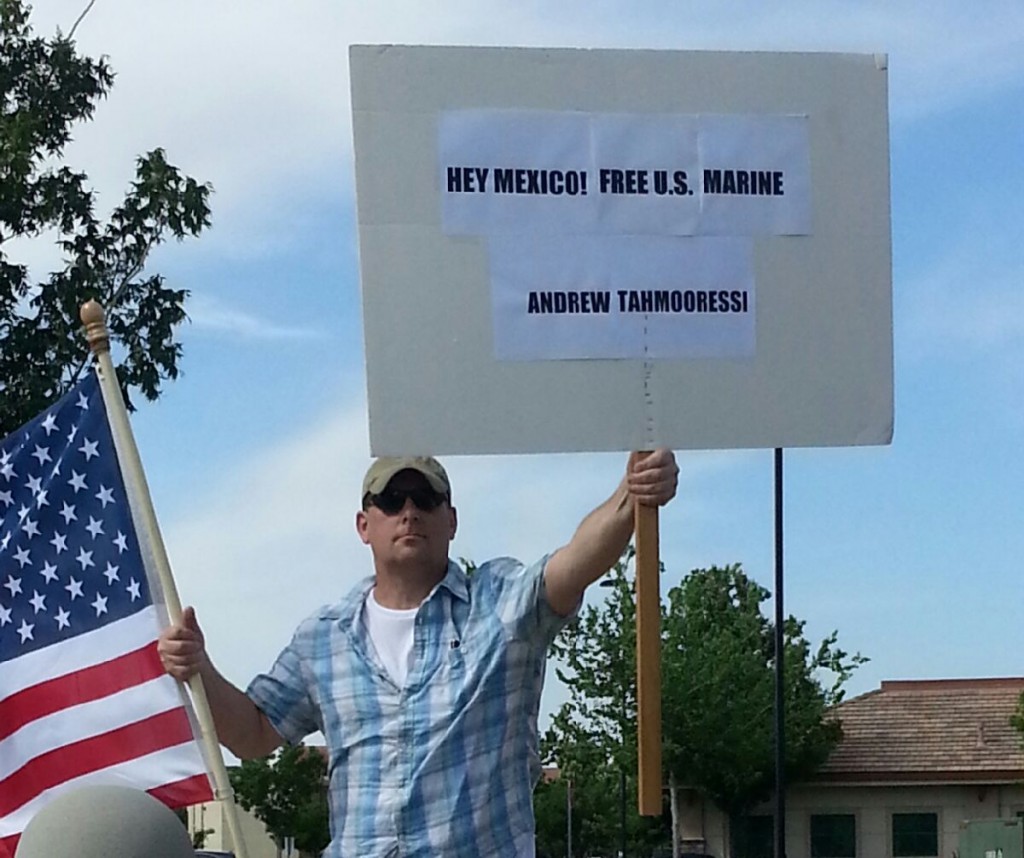 Amanda in Florida painted her truck for the rally. Way to go! 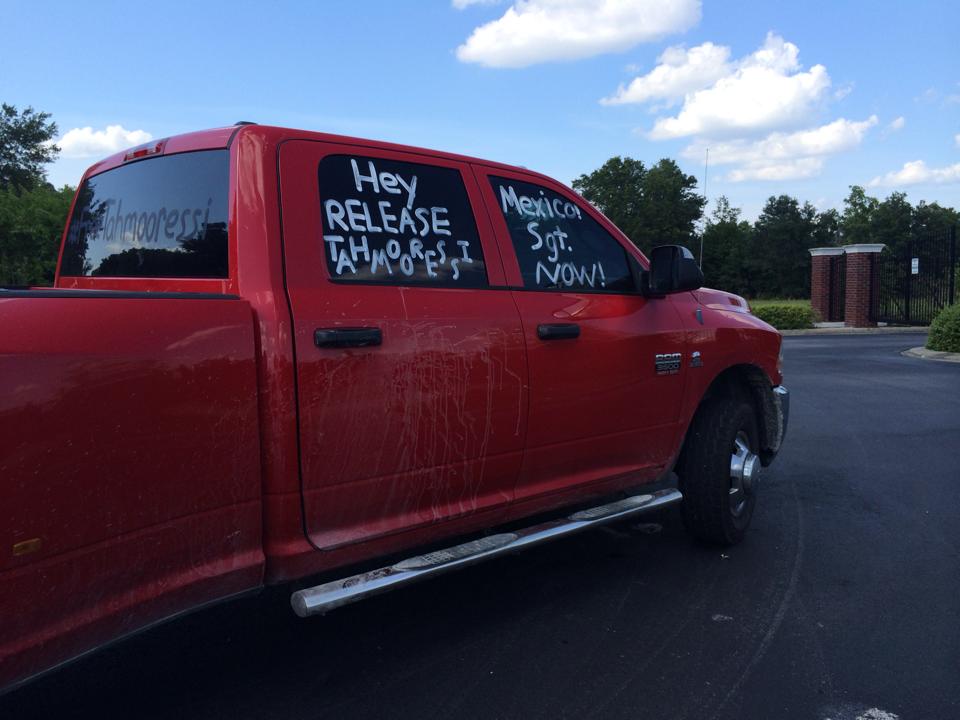 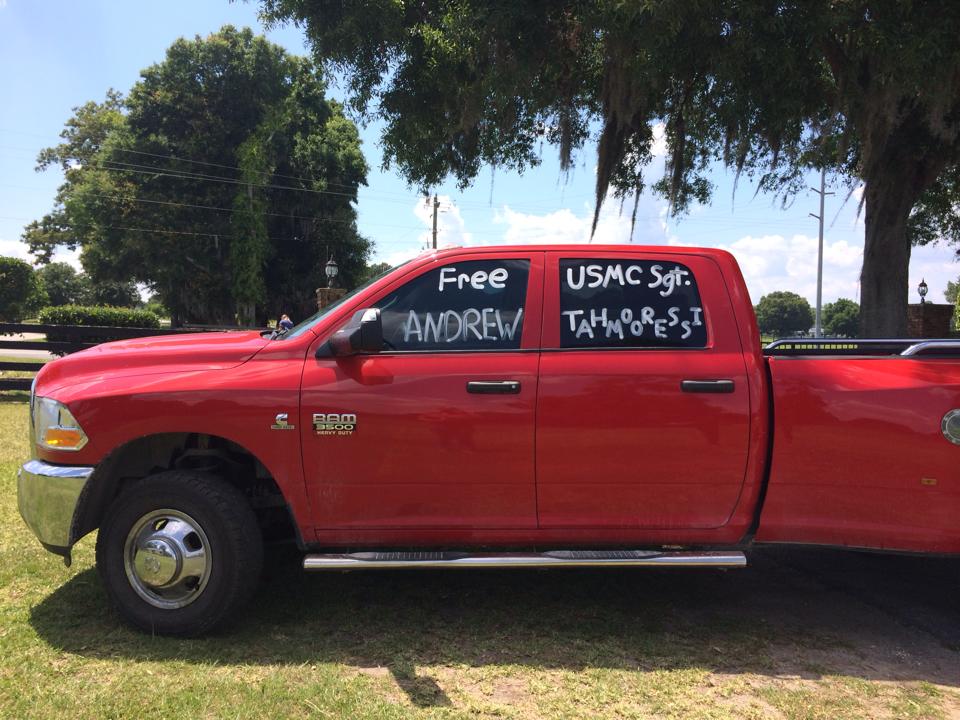 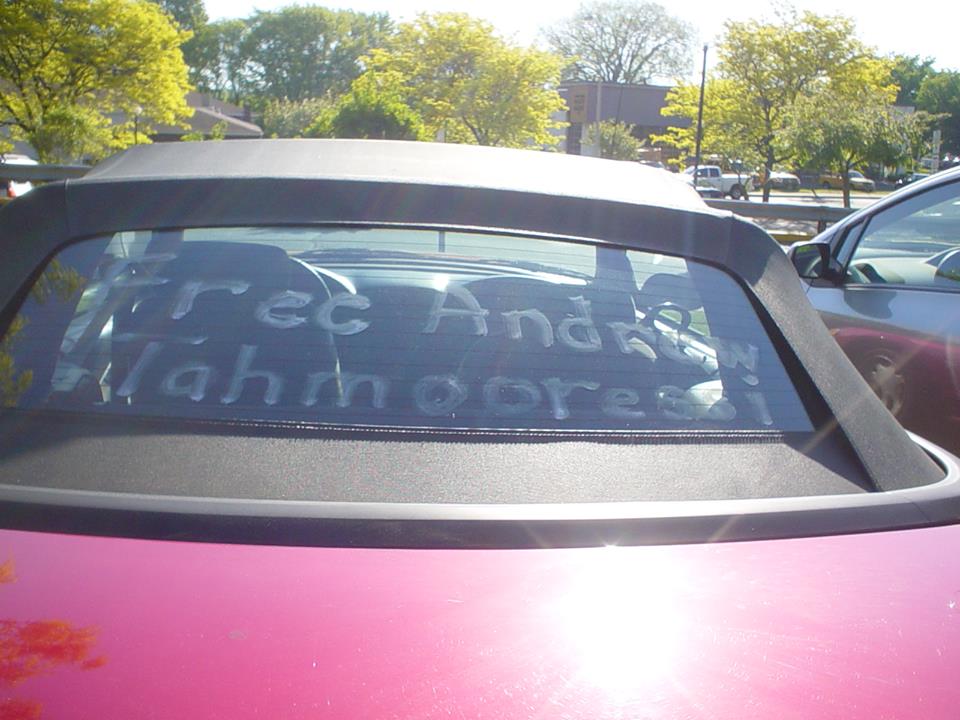 Andrew’s aunt Cindy was at the Mexican consulate in Orlando, FL. It was closed for “festivals.” 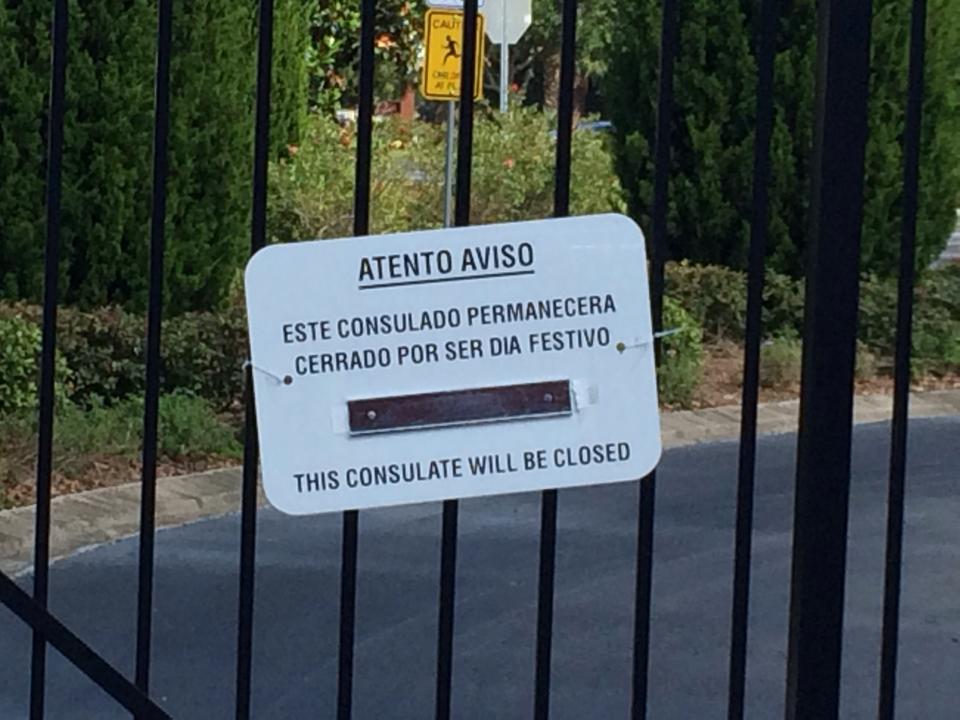 I was ready to interview the #MarineHeldInMexico, I was told I COULD interview him… but now they won't let me! #OTR

Here are some of the local news stories about the May 19th rallies:
Nationwide Rallies Planned To Encourage Release Of Jailed Marine
Locals protest U.S. soldier detained in Mexico
Family of Marine detained in Mexico speaks out

Thanks to all who are helping! We will achieve success when Andrew is home safe with his family!

0share 0share By Jeff Rainforth List compiled on 10-6-14 I’ve compiled several of these lists in the past, including Twitter accounts of members of the House of Representatives who didn’t support a Benghazi select committee,

The rallies to Free Marine Sgt. Tahmooressi from the Mexican prison continue.

0share 0share Pics from the May 5th rallies! We organized rallies for May 5th at Mexican consulates to demand Marine SGT Tahmooressi’s release from a Mexican prison. Post by Free United States Marine, Andrew Tahmooressi.