A retired Libyan general, Khalifa Haftar, who was once bankrolled by the CIA, led government & militia forces against militant Islamic groups in Benghazi on Friday. Reports of those killed range from 12 to 24. The Libyan government is calling the military operation a “coup,” and that it was not authorized. CNN reported that “A Libyan air force plane and 120 military vehicles took part” in the attack. Residents of Benghazi told CNN that there was more than one military plane over the city though.

The Guardian reported that “Air strikes pounded militia bases at dawn and 6,000 troops converged on the city, storming a series of bases and checkpoints. Eyewitnesses described a city in chaos, with jets streaking low over rooftops, tanks on the streets, heavy detonations and aggressive fighting.”

What’s funny about this is the timing. Just as the select committee for Benghazi is getting under way, a Libyan general with ties to the CIA goes into Benghazi without orders from the government, and begins to wipe out terror groups, some who may have been involved in the Sept. 11th attacks that killed 4 Americans, including Ambassador Chris Stevens in 2012. 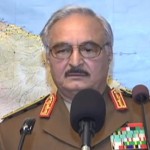 What do we know about General Khalifa Haftar? In 2011, Russ Baker from Business Insider wrote an article titled “Is General Khalifa Hifter The CIA’s Man In Libya?” According to Baker’s article, Khalifa was the military leader of an anti-Gaddafi group called the National Front for the Salvation of Libya (NFSL). After the group staged an attack on Gaddafi’s compound in 1984, the CIA began funding them. A second attack on Gaddafi was planned, but it was foiled, and Khalifa ended up in the United States for the next 20 years. Where did he live? Five miles outside Langley, Virginia, in Vienna, VA. Of course, Langley is where the CIA’s headquarters are located.

So if the CIA was behind Friday’s military operation, what would they hope to cover up? Perhaps any traces that they supplied Libyan rebels arms that made their way to al Qaeda, who then killed 4 Americans in Benghazi? It would be like another Fast and Furious, except far worse, as one of our Ambassadors was killed, not to mention, two former Navy SEALs, and an information officer.

If the CIA is covering up, it’s surely for Obama, and Hillary, and anyone else involved in the Benghazi scandal. On the other hand, it could be a move by Obama to eliminate those involved in the Sept. 11th Benghazi attacks, or witnesses to the attacks, so he can blunt any revelations coming out of the select committee by saying, “I brought the killers to justice.” Of course, any witnesses who could provide testimony would be dead also. Very convenient.

Related:
–List of Twitter Accounts of Democrat Reps who Walked Out on Families Of Benghazi Victims
–Battling Boys of Benghazi Song