Triple-amputee vet Airman Brian Kolfage has raised $17 million to build President Trump’s wall, and the number is rising fast. Kolfage, who is on his way to DC to work with Republicans lawmakers on wall fund legislation, has been mocked by has-been actress Alyssa Milano and failed comedian Jimmy Kimmel for his effort to keep Americans safe.

Now, George Takei, the actor who played Lieutenant Sulu on the TV series Star Trek, is mocking Airman Kolfage & those who support a border wall, even going so far as to suggest they are racists.

Takei, who is openly gay, posted a link to a story which praises the fundraiser for “Ladders to get over Trump’s wall” on his Twitter account on Christmas day. The GoFundMe campaign for the ladders was set up after Kolfage started his wildly successful campaign to fund the wall.

“Well played, indeed,” in regards to the fundraiser for ladders being started in opposition to Kolfage’s wall fund.

The article which the former Star Trek actor Tweeted out is on the website SecondNexus.com. The site is co-owned by Takei & his husband, Brad.

The article reads in part:

“Brian Kolfage, a triple amputee who was awarded a Purple Heart for his service in Iraq, launched a GoFundMe page to raise $1 billion toward the wall.

In just a few days, the campaign had raised more than $14 million toward their goal.

Kolfage has used the hashtag #GoFundTheWall to advertise these efforts.”

Another fundraising campaign popped up soon afterward, this one to fund ladders to get over the structure should it actually be built. This campaign has raised nearly $9,000 since it was created yesterday.

This campaign is using a hashtag of its own: #GoFundTheLadders.”

The article includes this Tweet saying that Kolfage started the wall campaign out of “hate.”

Takei also shared a message suggesting that Americans who want a border wall are racists.

Last Friday, Airman Kolfage Retweeted a picture that President Trump shared to his Twitter which shows spikes on top of the wall. 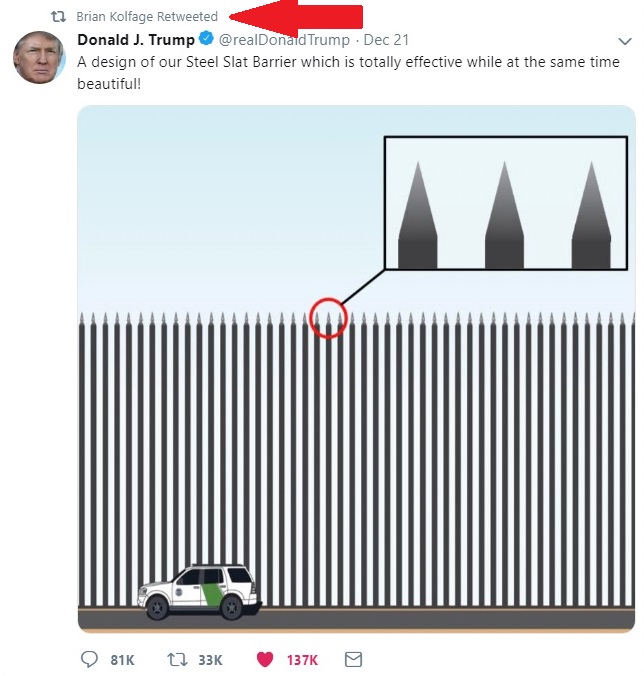 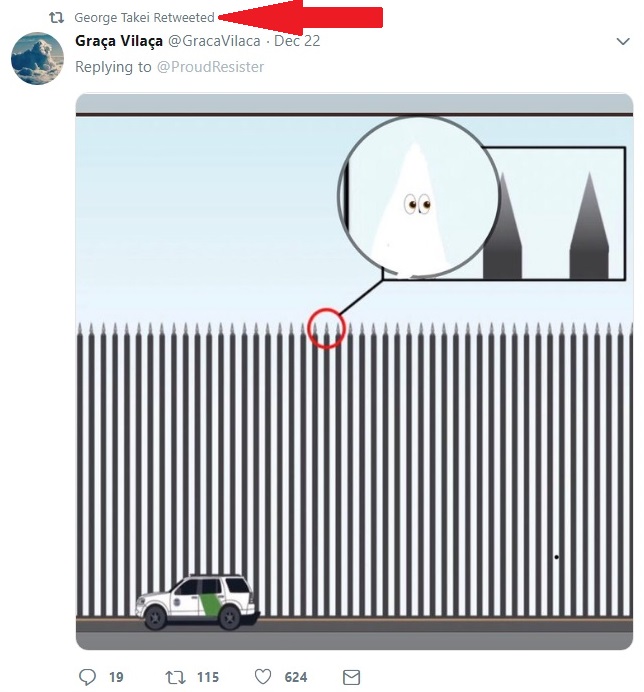 Takei also shared an article written by Charlotte Clymer, the transgender activist who started the “Ladders” fundraiser. In the article Clymer states that the Republican Party under Trump is white supremacist.

If you support a party that is anti-LGBTQ and anti-woman and xenophobic and white supremacist because you think your taxes are too high, you are not "socially liberal".

Takei is literally mocking triple-amputee Airman Kolfage for his wall fund, and promoting the opposing “Ladders to get over Trump’s wall” campaign on a website he co-owns. It should be noted that it is against federal law to assist foreigners to cross the US border illegally as the “ladders” campaign is doing. Takei is also suggesting that Airman Kolfage and all Americans who want a wall are racists. Nothing could be further from the truth, though. Most Americans and Airman Kolfage want migrants to come here legally. Kolfage Tweeted this about Trump’s “nice big shiny door” in the wall.

The good thing is the trump admin will have nice big shiny door, ada accessible for everyone coming LEGALLY!

Takei & the hateful left will attack anyone trying to keep Americans safe, including a triple-amputee vet who has given more for our country than most. That’s truly despicable.

It should be noted that Takei was accused of sexual assault last year by former model and actor Scott R. Brunton who said he was drugged and groped by Takei at the actor’s Los Angeles condominium in 1981.

Share this if you support Airman Kolfage & think Takei should go back to “space”!