JR
The best part of this article is where Rolling Stone Reporter, W.J. Cassidy, is given an AR-15 by the trainer and allowed to shoot. Cassidy is from Massachusetts, and the women joke about him “probably” being liberal, and that he’s “probably never shot a gun.” He found shooting the AR, “Exhilarating.” I think the ladies may have cracked his anti-gun force-field!

“I’m gonna kill you!” the pert blonde ponytailed lady screams, in a petite room in the bowels of the convention center. “I said I’m gonna kill you!” “No!” huffs her target, a mom-jean’d-woman in her mid-fifties. “Back off!” Then, responding to ponytail’s faux-intimidation, the older woman slaps an open palm into the face of a shooting-range silhouette pinned on the back wall, un-holsters a pistol, and pops six rounds into a theoretical assailant’s chest — blam-blam-blam-blam-blam-blam, quick sharp cracks, with a corresponding swirl of odorous gun smoke. The ammo’s not live: the gun is firing “simunition” bullets, created specifically for this kind of training exercise. But as the casings zing hard off the gray walls and careen, a few feet in front of me, onto the plastic tarp, I cover my eyes in the crook of my elbow just in case.

It’s early spring and I’m in Waco, Texas, for the 2nd annual national conference of A Girl And A Gun, a shooting league birthed out of — and, now, attempting to shepherd forward — the nascent women and firearms movement.

Over the last decade, the percentage of armed women in America has risen quietly: according to Gallup, the numbers went from 13% in 2005 to 23% in 2011. By last year, that rise wasn’t so quiet anymore. Women’s interest sites declared “The Rise Of The Female Gun Nut.” A Girl and a Gun-type shooting clubs, like Babes with Bullets and The Well Armed Woman, bloomed. And a staunchly, proudly masculine industry at least attempted to keep pace. Walk around a gun show these days, and you’re more likely than not to find at least one table piled wide with .223-caliber AR-15 assault rifles rendered in hot pink. 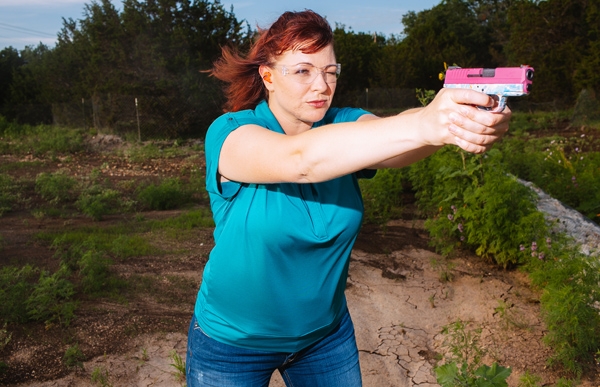 The movement, as of now, is very much fledgling. AG&AG, its de facto hub, nearly tripled attendance since last year’s inaugural event, with local chapters from Marietta to Lehigh Valley to Cheyenne represented; still, that means just under 300 people, attendees and instructors all told. But one thing is for sure: here, across the basement-level conference rooms of the serene, sleepy Waco convention center, with these gun-happy ladies, the spirit is strong.

In the Simunition room, the ponytailed instructor has transitioned from fear-conditioning her wards (“Stress goes up, technique goes down!”) to explaining her pet theory as to why women are more accurate shooters than men: “We’ve been applying eyeliner since we were kids, right? It’s a very precise motion” — and one often done with one eye shut, just like pulling the trigger while focusing on that front sight.

Down the hall, in “Secrets of Concealed Carry,” the prominent gun blogger Kathy Jackson is displaying a wide array of gun-pouch-equipped handbags. With purse after purse, she smoothly yanks out a dummy pistol, then points it at the back of the classroom. There’s a nice big white one with green zigzags, and a compact light brown one with fun straps, and, ooh, here’s a great one with a “reinforced strap” that “no knife” could cut through. “Make sure you drop the purse, then aim,” she explains, as the newly enlightened room ahhs in appreciation. “You don’t want it swinging into your shooting arm.”

A debate, well worn around these folks, bubbles up: if you can’t get your gun out quickly enough, should you fire at the bad guy through the bag? One woman says yes: “Kyra Sedgwick did it on The Closer!” Jackson harrumphs: “So many people tell you: just shoot through the purse!” But she actually took a group of expert shooters to a range, and they fired through a pile of old handbags from Goodwill. The results were abominable. “Half of them,” Jackson reports ominously, “completely missed cardboard with their purse shots.” Quickly, this room has been converted into a staunchly anti-purse-shot crowd. Read more… 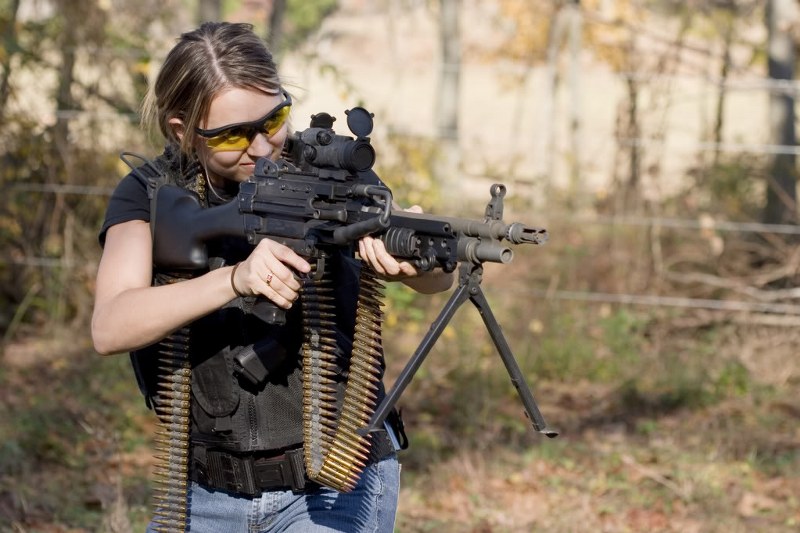