Trump isn’t about to let this one slide! Hillary Clinton made a joke about black people that most people have probably heard at least once in their lives.

The phrase “they all look the same to me” used to be said about Asians. Hillary tried the joke on black people, though.

Clinton made the joke last month during an interview. She appears to have gotten away with it. The question is, if a conservative made the same joke, would they get away with it, or would liberal media & justice warriors scream “racism!” Yeah, I’m gonna say the latter.

Kirk wrote, “WOW – if a conservative said this they would be boycotted and not allowed back in the public arena — Hillary said “all black people look the same” – incredibly racist thing to say Hillary! RT!”

Kirk was referring to a moment during an October 29th on-stage interview with Recode’s Kara Swisher, in which Swisher confused Sen. Cory Booker, D-N.J., and former Attorney General Eric Holder.

“Yeah, I know they all look alike,” Clinton quipped to a wave of laughter and applause in the room.”

Here are the screenshots of Trump’s Retweets. 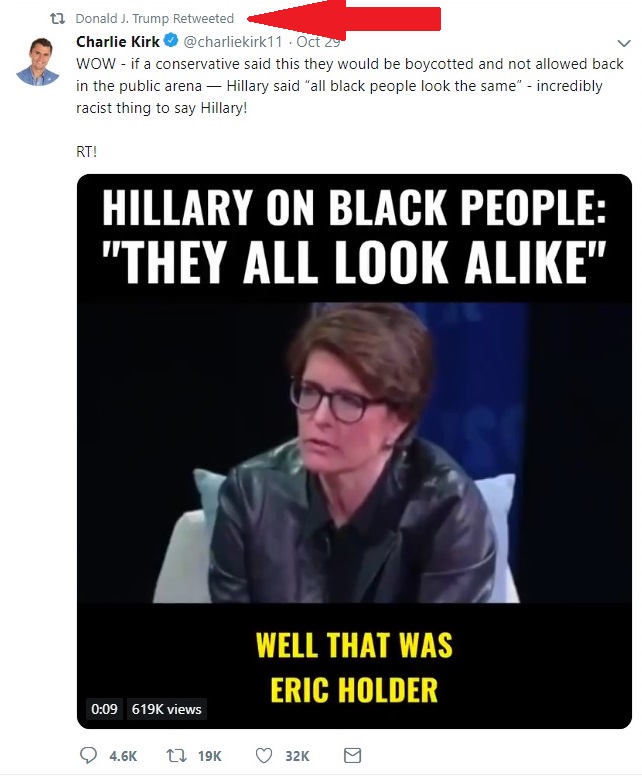 And the Tweets Trump Retweeted. Watch the video.

WOW – if a conservative said this they would be boycotted and not allowed back in the public arena — Hillary said “all black people look the same” – incredibly racist thing to say Hillary!

Here’s the video in context.

The funny thing is, some liberals actually came to Hillary’s defense. I’m sure they would do the same for Trump… Not.

“She was calling out the interviewer for not knowing what she was talking about. The interviewer mentioned another black person’s name while talking about someone else. Hillary called her out by essentially saying “wow you must think all black people look alike.””

“The ability to perceive, understand, and use irony and sarcasm appropriately is associated with higher intellectual functioning. This man suffers irony deficiency.”

And from a “blue check.”

“Conservatives DO say this AND In the context that all black people are a monolith beneath contempt, one indistinguishable from the other. Fortunately, that’s not what Secretary Clinton was saying at all. Context is important.”

Now let’s contrast that with what happens when Trump makes a joke. Remember when he quipped about a Hispanic Border Patrol officer speaking perfect English? Let’s check the liberal response.

Heres’s Trump introducing a border patrol officer, who appears to be Hispanic and says “he speaks perfect English.” Racist much? #trumpmustgo pic.twitter.com/SKuOsWWm88

NYT: "And there was one awkward moment: As Mr. Trump introduced a Hispanic Border Patrol agent, Adrian Anzaldua, above, he noted that he spoke "perfect English.”

It's not awkward. He's racist.

Trump started his campaign calling Mexicans “rapists” and “murderers.” Of course he will say that a Latino border agent “speaks perfect English.” Dude has been a racist since day one.

Thanks @Omarosa, but we don’t need your tapes. We’ve already know.

Oh yeah, there’s no hypocrisy there!

As for Hillary, she probably thought it would be OK since she carries hot sauce in her purse.