Ever since my friend, triple-amputee vet Airman Brian Kolfage, announced the all-star team that would oversee construction of the wall that he raised over $20 million for, leftist fake news media went into overdrive, lying about what’s really going on. Headlines from CNN, CBS, Time and tons of other news outlets screamed, “All Money Being Refunded,” “GoFundMe Ends Campaign,” and “GoFundMe Refunds $20 Million After Campaign Fails.”

It’s all bull, though. The money hasn’t been refunded, the campaign hasn’t ended or failed, and GoFundMe is still taking donations for Kolfage’s campaign to build the wall and will continue to do so.

Dems in the House weren’t going to allow the money to be given to the government and used for construction of the wall, so Kolfage announced a team that would build it on private land. Airman Kolfage & GoFundMe then OFFERED refunds to those who donated before January 11th who don’t want Kolfage’s team to build the wall. Almost everyone who donated is opting to have their money go to build the wall under Kolfage’s new plan.

Airman Kolfage posted this a few hours ago:

The media won't go near this now… The people are fighting back!

Airman Kolfage addressed what’s going on in a video.

MEDIA IS LYING! Our GoFundme Campaign Is SMOKING HOT! it's not being "cancelled" or "all refunded"

We are BUILDING the wall mile by mile for 50% the cost. If you donated before Jan 11th just opt-in on at https://t.co/uHdeeSUN97 @RyanAFournier @gehrig38 @mamendoza480 @MarkDice pic.twitter.com/i1Lt0OjMRM

SHARE THIS IF YOU SUPPORT AIRMAN KOLFAGE & WANT THE WALL!

“The fake news liberal media said the “Gofundme me is cancelled! All money refunded” WRONG! RAISED $200,000 yesterday! We are building the wall And our team is getting bigger names and huge huge private donors coming forward! $1billion is our goal!”

The fake news liberal media said the “Gofundme me is cancelled! All money refunded” WRONG! RAISED $200,000 yesterday! We are building the wall And our team is getting bigger names and huge huge private donors coming forward! $1billion is our goal! ????????????????????https://t.co/QqxpVG72RN pic.twitter.com/3vc1mGbXUn

Here are a few of the media outlets running fake news. 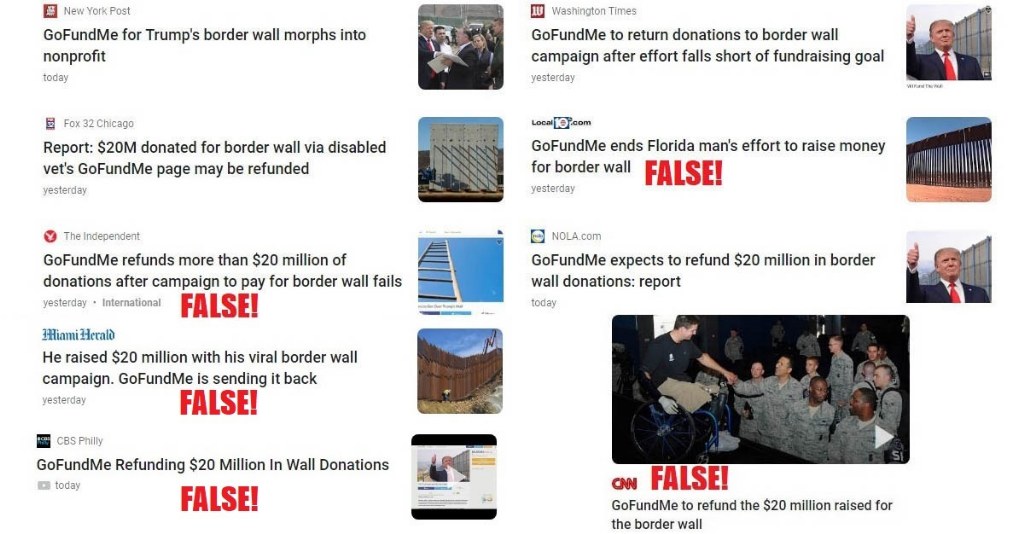 Angel Mom Mary Ann Mendoza whose police officer son was killed by an illegal responded to today’s news. Mendoza is a member of Kolfage’s advisory board that is overseeing construction of the wall.

Airman Kolfage is heading to Texas to meet with landowners who want his team to build the wall on their border property.

I’m going to be heading down to Texas in the coming week to meet with our first land owners who want our wall. GUESS WHAT? No one can stop us! Sorry @SpeakerPelosi

Fake news MSM doesn’t want Brian to succeed & they are doing everything they can to stop him, including lying, just like they did to Kavanaugh. The campaign hasn’t ended, all the money isn’t being refunded, and Brian & his team ARE building the wall. Members of Kolfage’s team include Sheriff David Clarke, Fox News contributor Sara A. Carter, Former Colorado Congressman Tom Tancredo, Brigadier General Dr. Robert S. Spalding III, and many other awesome people!

SHARE THIS IF YOU SUPPORT AIRMAN KOLFAGE & WANT THE WALL!

This is IMPORTANT. If you donated before January 11th and you want your contribution to go towards CONSTRUCTION of the WALL, you need to tell GoFundMe by clicking the link below:

If you donated after January 11th, your money is going towards the construction of the wall. All donations from here on forward go to build the wall on private land.

Anyone who donated before January 11th has 90 days to tell GoFundMe to use their contribution to build the wall.

Don’t miss out on being part of history! Airman Kolfage & his team are building the wall!

Here’s what you can do to help Airman Kolfage get the wall built!