Angel Mom Mary Ann Mendoza lost her son, Brandon, in 2014. Brandon Mendoza was killed one day after spending Mother’s Day with her. He was a sergeant with the Mesa Police Department, and an illegal immigrant who was drunk & on meth crashed into his car.

Mary Ann explains on the memorial website for Brandon:

“My son, Sgt Brandon Mendoza, was killed on May 12, 2014 in a violent head on collision. He was killed by a 3 times the legal limit drunk and high on meth ILLEGAL CRIMINAL! He had driven 35 MILES the wrong way on 4 different freeways before slamming head on into my son’s car. My son had just finished his shift and was heading home after working to keep Mesa citizens safe and his community crime free when his life was taken so tragically.” 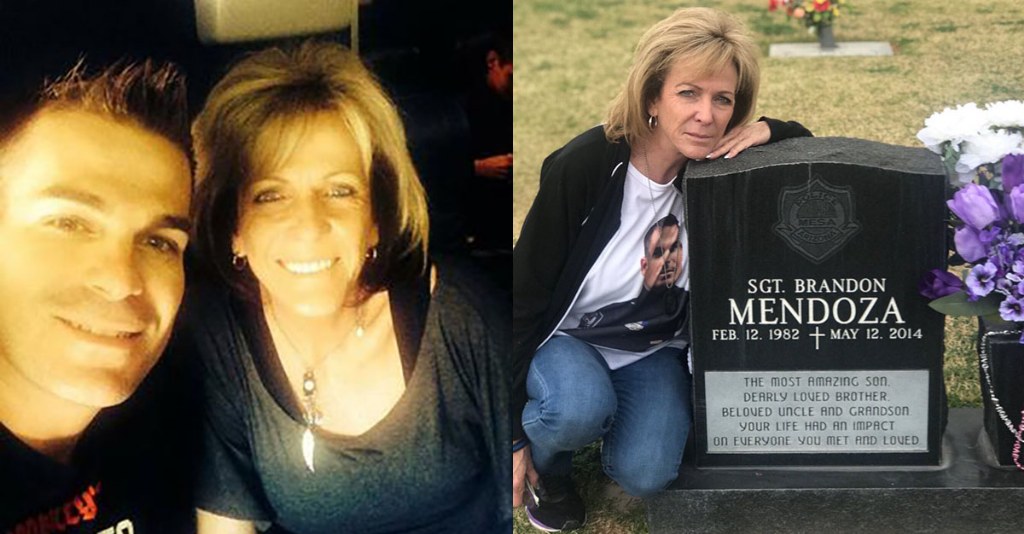 Mary Ann spoke out about the need for a wall in a PSA for an organization that promotes action on issues President Trump is championing.

Mary Ann has appeared with President Trump on numerous occasions to tell people about her son, and to urge politicians to do more about border security & to build the wall. Last year she spoke of those affected by criminal illegals, of those who have lost loved ones because of them, and called out mainstream media for not covering Angel Families & illegal immigrant crime.

Angel Mom Mary Ann Mendoza: "There are hundreds of thousands of victims every year who are affected by illegal alien crime – rape, assault, identity theft… The mainstream media does not let you know what's really happening." pic.twitter.com/IuwEmrdLvw

Since January 1, neither CNN nor MSNBC has booked a single “Angel Mom” — mothers of children brutally murdered by illegal aliens — as guests on their networks, per an analysis conducted by the Republican National Committee (RNC).

Mary Ann went with other Angel moms to Nancy Pelosi’s office today to demand she take action on illegal immigrant crime. Pelosi wouldn’t even meet with them.

At @SpeakerPelosi office asking for a meeting for Angel Families. She was too busy to meet with them. #AngelFamilies #AngelMoms pic.twitter.com/EMacVERuBu

A group of heroic Angel families came to Washington, DC today to support building the wall and to tell their tragic stories of how they lost loved ones due to illegal immigration.

Unfortunately, you probably didn't know that, since the #FakeNews media continues to ignore them.

Mainstream press won’t cover Angel moms like Mary Ann because they provide powerful arguments why we need a border wall. Leftwing media, which is just an arm of the Democratic Party, don’t want a wall on our border, they want illegal immigration to continue unabated, no doubt so Pelosi & the Dem Party can turn them into future voters. It doesn’t matter to them that parents like Mary Ann lost their loved ones to criminal illegal aliens. That’s why Mary Ann joined with Airman Kolfage to build the wall.

Enough is enough. It’s time to get the wall built so mothers like Mary Ann don’t lose their sons and daughters to illegals.

Share this if you support Mary Ann & want the wall!

Below is information on Airman Kolfage’s “We Build the Wall” campaign & how you can help. Support Kolfage & Mary Ann as they are actually getting the wall built on private land: