Triple-amputee vet Airman Brian Kolfage landed in Washington D.C. late yesterday to discuss with lawyers & backers how to begin building the wall with the funds he has raised so far. In just 16 days, patriotic Americans have helped Airman Kolfage raise almost $19 million for the border wall.

This was the triple-amputee’s second trip to the nation’s capital in a week. Kolfage visited D.C. last week for high-level talks with elected officials & others regarding how the money would be spent on the wall. He returned to D.C. yesterday to put the finishing touches on legal matters.

As Kolfage was departing for the capital, he posted a picture of his prosthetic legs, chiding Democrats for not working, while he, a triple-amputee, is.

Shortly after Kolfage arrived in D.C., he headed over to Fox News headquarters for an interview with Trish Regan, the host of “Trish Regan Primetime” on Fox News Business.

Regan began the interview with scenes from the latest attempt to breach the southern border where Border Patrol agents were attacked by over a hundred rock-throwing illegals on New Years Day. 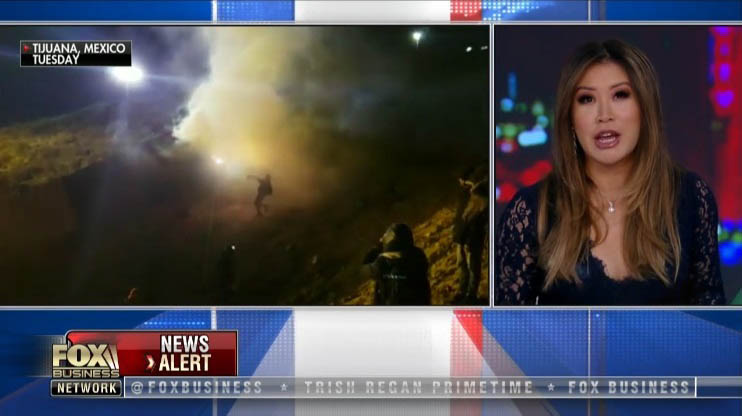 Kolfage told Regan that the $18 million already raised for the wall is about to blow up and reach a number that people aren’t going to be able to fathom after final plans to build the wall are revealed later this week. Regan noted that a “lot of Americans” want the wall built given the number of people who are donating. Kolfage spoke of the attacks on Border Patrol agents that occurred just a few days ago and said that Democrats have been enabling & encouraging illegals to come across the border.

Airman Kolfage went on to say that Democrats won’t give President Trump the money for the wall and that that’s where Americans come in with the campaign he started. Those working on the campaign have formulated a plan to get the wall built, Kolfage said. The triple-amputee asked President Trump to hold his ground vs the Democrats & to keep the government shut down until they cave, but that even if they don’t, that he & those working on the wall fund campaign would get the wall built “without politicians.”

Kolfage spoke of the need to know who is entering the country to keep Americans safe, and that many who oppose the wall have never been to war zones like he has where he witnessed first-hand the oppression, and what happens when people lose their freedoms.

Later that evening, after the show had aired, President Trump tweeted:

“Sadly, there can be no REAL Border Security without the Wall!”

Sadly, there can be no REAL Border Security without the Wall!

We’ve been told that President Trump is aware of Kolfage’s wall fund campaign, as are senior members of his staff.

I’ve been in contact with Airman Kolfage daily since he started the wall fund campaign and he let me know what’s going on with the meetings in D.C. I can’t say much about the particulars before he reveals the final plans later this week, but I can say, it’s going to be massive. You will immediately recognize the high-level people who have come on board to assist Airman Kolfage when they are named. There are some serious powerbrokers working behind the scenes, and this thing is going to explode when the plan to fund the wall is finalized in a few days.

Get ready, it’s going to be an epic ride! Thank you, Airman Kolfage, for all you’re doing!

Share this if you want the wall built & support Airman Kolfage!