In under two weeks, Triple-amputee vet Airman Brian Kolfage has raised over $18 million to build President Trump’s wall. Kolfage, who just returned from DC after working with Republican lawmakers on wall fund legislation, has been mocked by has-been actress Alyssa Milano and failed comedian Jimmy Kimmel for his effort to keep Americans safe.

Last week, the actor who played Lieutenant Sulu on the TV series Star Trek, George Takei, also mocked Airman Kolfage & those who support a border wall, even going so far as to suggest they are racists.

Now, liberals are going after Kolfage’s coffee company which he supports his family with. His company gives 10% of proceeds to veterans charities.

After Airman Kolfage graduated college, he became interested in news publishing and began managing pages on Facebook for news websites. He also started his own coffee company, Military Grade Coffee.

In October, right before the midterms, Facebook shut down all of Kolfage’s pages, including his coffee company page, & stole $300,000 in advertising fees he had paid the social media behemoth.

On top of his coffee company, Kolfage ran the pro-Trump Right Wing News Facebook page and had been involved with the brand for several years. The page had 3.6 million fans, and Brian was a major factor behind its growth. Brian’s coffee company page had about 230,000 fans when it was shut down. Kolfage wrote of it: “Facebook also deleted my other business page. I own a coffee company called Military Grade Coffee company. We don’t post politics, we sell coffee and support veteran charities. Facebook is maliciously attacking my way of life because of my beliefs, and they don’t care.”

Since Kolfage has raised so much money for the border wall, liberals are now attacking his coffee company with racist, negative reviews on Amazon in an attempt to get people to stop buying from it.

“Goes great with Early Morning White Nationalism! This coffee is great for washing down my birther conspiracies! Really gives my persecution complex a solid blast!”

The reviewer gave Brian’s coffee company one star even though he hadn’t purchased any, and included a photoshopped picture of Airman Kolfage’s face superimposed on a Nazi soldier. The person added Hitler’s mustache to Brian’s face. 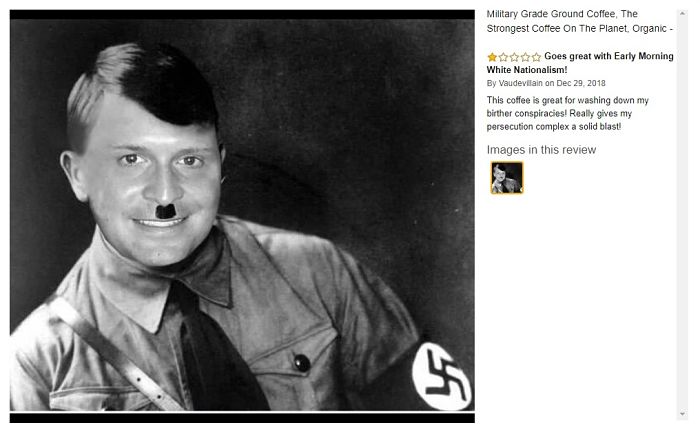 “A nice front for a racist organization. Military Grade Ground Coffee is a front for racism and white supremacy.”

Another user came to Kolfage’s defense, responding: “This is not a verified purchase. This guy didn’t even buy the coffee, he’s a liar. I’ve been drinking this coffee a year, it’s the best I’ve ever had. There are 100 plus 5-star reviews from verified purchases that tell the truth.”

An Amazon user who hadn’t purchased the coffee left a one-star review, stating, “Yes, this is the garbage they serve you in the Army, which is exactly why I’m giving this one star. This is barely palatable. Waste of water, really….”

You can see a review from another user right below the negative one. The positive reviewer had actually purchased Kolfage’s coffee. 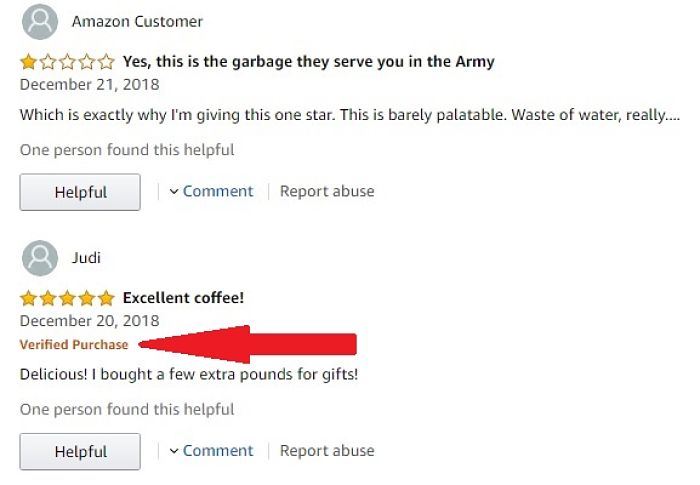 There are over a 100 reviews on Kolfage’s coffee company on Amazon. The vast majority of them rate it 5 out of 5, the highest you can give. Liberals are trying to drive that down so people won’t purchase from Kolfage.

Airman Kolfage thanked a person who bought his coffee the other day.

Kolfage stated: “Glad you love it @gary_tenn My coffee company gives 10% back to wounded veterans. Thats 10% right out of my pocket to help my fellow service members in need. That’s more than @Alyssa_Milano @jimmykimmel have done for veterans.”

Glad you love it @gary_tenn My coffee company gives 10% back to wounded veterans. Thats 10% right out of my pocket to help my fellow service members in need. That's more than @Alyssa_Milano @jimmykimmel have done for veterans https://t.co/zBEWO18oFk

Liberals then attacked Kolfage because he supports President Trump and the wall.

One Twitter user replied: “You’re trash, bro. The #klanwall will never get built.”

You’re trash, bro. The #klanwall will never get built.

And another responded: “10%? And after net or gross profit? After tax write off? Definitely not the millions raised for a racist based wall. Worthless. Disgrace to #America and vets that believe in integrity and honor.”

10%? And after net or gross profit? After tax write off?

Definitely not the millions raised for a racist based wall.
Worthless.

Disgrace to #America and vets that believe in integrity and honor.

Because Airman Kolfage is trying to keep Americans safe from criminal illegals like the one who killed a cop in California the other day, liberals are attacking his way of life in an attempt to bankrupt him. That’s how despicable the left is. Attacking war heroes who continue serving by trying to keep us safe. Absolutely vile & disgusting!