This is great news! Stone was treated so unfairly & Trump isn’t having any of it. Roger will not have to report to prison since the president commuted his sentence. I’ve been friends with Stone on Facebook for quite some time & he would regularly update me as to what was going on. A few days ago Facebook took down various accounts that were helping him, and they suspended his personal page. As you can see in the screenshot below, the private messages he sent me were removed by Facebook, also. A video surfaced online of Roger dancing and celebrating with family & friends because of President Trump’s commutation and despite being silenced by the social media giant (See video below). 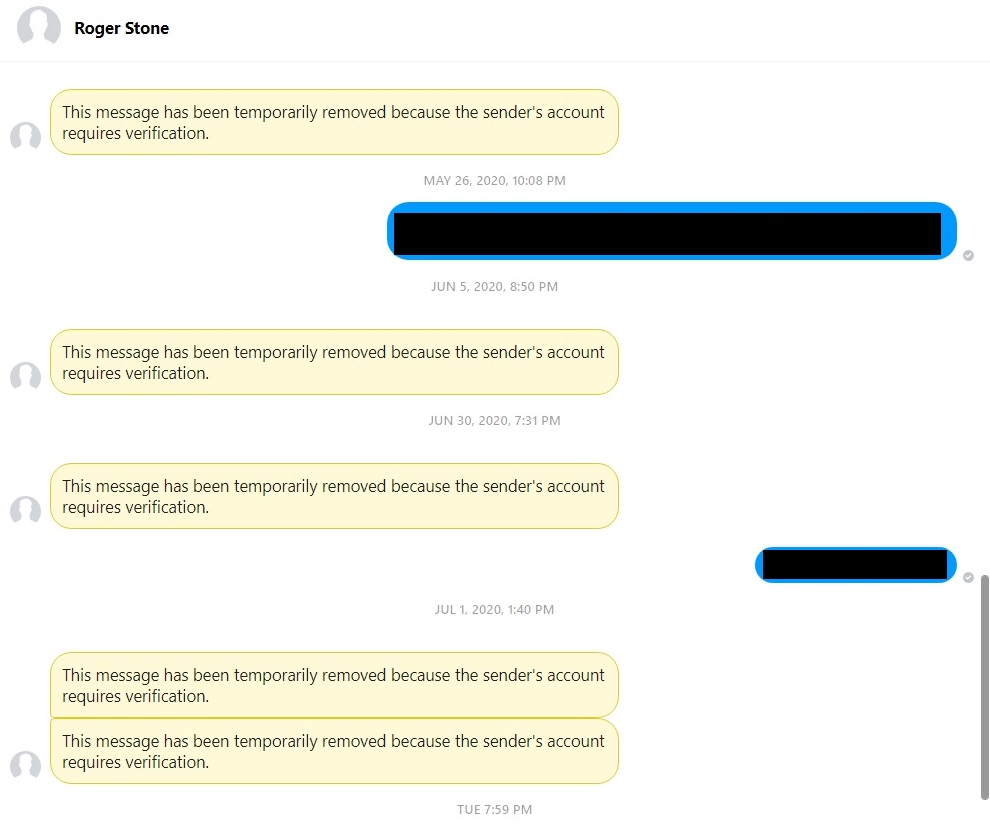 “The White House announced Friday that President Trump signed an Executive Grant of Clemency commuting the “unjust sentence” of Roger Stone, just days before the longtime political operative was slated to report to prison to serve more than three years for charges stemming from former Special Counsel Robert Mueller’s investigation.

In a lengthy statement released late Friday, White House press secretary Kayleigh McEnany said the president had made the decision to commute Stone’s sentence “in light of the egregious facts and circumstances surrounding his unfair prosecution, arrest, and trial.”

“Roger Stone is a victim of the Russia Hoax that the Left and its allies in the media perpetuated for years in an attempt to undermine the Trump Presidency,” McEnany said in a statement Friday night. “There was never any collusion between the Trump Campaign, or the Trump Administration, with Russia. Such collusion was never anything other than a fantasy of partisans unable to accept the result of the 2016 election. The collusion delusion spawned endless and farcical investigations, conducted at great taxpayer expense, looking for evidence that did not exist.”

McEnany added that Mueller’s office “resorted to process-based charges leveled at high-profile people in an attempt to manufacture the false impression of criminality lurking below the surface.”

“These charges were the product of recklessness borne of frustration and malice,” she said.

Share this if you agree that Trump was right to pardon Roger!

Thank you President @realDonaldTrump for saving his life. #RogerStone pic.twitter.com/oou2ekHLlT

McEnany touted Stone’s career in politics, noting that he worked for nearly 50 years as a consultant for high-profile Republican politicians, including former President Ronald Reagan, Sen. Bob Dole and others, while noting that Stone is also known for “his outspoken support for President Donald J. Trump and opposition to Hillary Clinton.”

McEnany went on to blast Mueller’s prosecutors for the fashion in which they arrested Stone, noting he is a “67 year old man with numerous medical conditions, who had never been convicted of another crime, and that they used “dozens of FBI agents with automatic weapons and tactical equipment, armored vehicles, and an amphibious unit to execute a pre-dawn raid of his home, where he was with his wife of many years.”

McEnany went on to add that Stone would “be put at serious medical risk in prison.”

Stone was set to report to prison on July 14 to serve 40 months. He was sentenced in February to more than three years in prison after being convicted in November 2019 on seven counts of obstruction, witness tampering and making false statements to Congress. Stone, however, has appealed his conviction and continues to deny any wrongdoing.

“He has appealed his conviction and is seeking a new trial. He maintains his innocence and has stated that he expects to be fully exonerated by the justice system,” McEnany said. “Mr. Stone, like every American, deserves a fair trial and every opportunity to vindicate himself before the courts.”

She added: “The President does not wish to interfere with his efforts to do so. At this time, however, and particularly in light of the egregious facts and circumstances surrounding his unfair prosecution, arrest, and trial, the President has determined to commute his sentence.”

“Roger Stone has already suffered greatly,” she added. “He was treated very unfairly, as were many others in this case. Roger Stone is now a free man!”

Earlier Friday, an appeals court denied Stone’s request to delay reporting for his sentence, saying he must report for prison on Tuesday.

“In sum, Stone is not legally eligible for further postponement of his reporting date under 18 U.S.C. § 3145(c), which is the only basis on which he seeks relief from this court. We therefore deny his motion,” the court wrote in its order.

The president’s commutation, though, nullifies that order.

Trump, for weeks, has signaled he could be open to granting Stone clemency — tweeting last month that Stone was “a victim of a corrupt and illegal Witch Hunt, one which will go down as the greatest political crime in history. He can sleep well at night!”

During an exclusive interview with Fox News this week, Stone said he was “praying” for Trump to intervene.

When asked whether he’d prefer a pardon or a commutation of his sentence, Stone said “either one obviously would have an effect, in my opinion, of saving my life.”

A presidential pardon completely absolves an individual of the crime he or she is found to have committed. A commutation lessens the punishment or eliminates jail time, but leaves the conviction standing.

“I have deep concerns about going to a prison where there absolutely is COVID virus, and, therefore, either one would have an effect of saving my life,” Stone said.

He added: “If I should be fortunate enough to get a commutation, I would continue to fight for vindication.”

As of Thursday evening, Stone said he had not received any formal communication from the White House on a potential pardon or commutation of his sentence.

“I think I’ll be the last person to know,” Stone told Fox News. “He hates leaks, and he hates to be told what to do. I have instructed my lawyers not to contact the lawyers at the White House.

He added: “I certainly think it could happen. I’m not going to second-guess the president.”

Stone was not charged with any underlying crime of coordinating with Russia during the 2016 presidential election, though Mueller’s team investigated Stone over tweets claiming to have information about WikiLeaks document dumps prior to their release.

When asked whether Stone felt WikiLeaks influenced the 2016 election, he said: “Yes. All of it.”

“My whole purpose in hyping Wikileaks on Twitter was to make sure the media didn’t sweep it under the rug, only because I was told it was politically significant,” Stone said of his tweets in 2016, which he said were “not specific,” and simply flagged that a WikiLeaks document dump “would be big” and was coming.

“I never discussed it with Trump. I have no idea what he thought about it, we never discussed it,” Stone said. “You have to understand something about Donald Trump—when you talk to him on the phone, he talks and you listen. That’s kind of the way it works.”

When asked whether Stone had any regrets over his involvement in 2016, he said no.

“I engaged in legitimate, perfectly legal political activity which Mueller’s corrupt investigation chose to criminalize,” Stone said. “I thought the results of the 2016 election were crucial.”

Meanwhile, earlier this week, Facebook announced it had removed a network of accounts on the platform and on Instagram allegedly linked to Stone. The company said the accounts were allegedly involved in “coordinated inauthentic behavior in the United States.” The networks, according to Facebook, were focused on domestic audiences.

Facebook said it “identified the full scope” of the networks “following the recent public release of search warrants pertaining to the investigation by Special Counsel Robert Mueller in response to a joint petition from The New York Times, CNN, the Associated Press, The Washington Post, and Politico.”

“Our investigation linked this network to Roger Stone and his associates,” Facebook said Wednesday.

Stone, however, denied being linked to the accounts, calling Facebook’s accusations “defamatory,” and said he did not think it was “coincidental” that they made the announcement this week.

“They’ll have a chance to prove it. Words on a press release are assertions and accusations. It is false,” Stone said. “It is put up or shut up time very soon. They’ll get a chance to show me the illegitimate sites. They don’t exist. I don’t own hundreds of Facebook pages and I never have.”

Stone told Fox News he plans to file a lawsuit against the social media giant.

“My lawsuit against Facebook will be a defamation suit,” he said. “They have accused me of doing something that they imply is illegal and violated their rules.”

Share this if you agree that Trump was right to pardon Roger!