While we have ridiculous news almost every day, like the radio station that just banned a classic Christmas song after listeners said it promotes date rape, and Bill & Hillary saying that Canada is better than America, we sometimes get awesome news of everyday Americans doing awesome things.

We were treated to great news last month when an Arkansas high school choir sang the anthem at a packed restaurant and everyone in the establishment stopped eating and rose to their feet. It was a feel-good moment we don’t get a lot these days.

Now, a FedEx driver, who it’s being reported is a former Marine, saw an American flag that had fallen to the ground in someone’s front yard. The driver immediately stopped his truck, got out, and tried to get the flagpole that the flag was on back in standing position. The flagpole wouldn’t stay up, so the driver properly folded the flag.

“A Fed-Ex driver in Maryland took time out in his busy day of delivering packages to show respect for an American flag.

A home security camera captured the driver, Mike King, stopping when he saw the flag on the ground outside a house in Ferndale.

When King could not get the flagpole to stand, he took the American flag, folded it properly and placed it in a safe place on the porch.

He then went back to work.

King is a Marine veteran.”

The American Legion describes what each fold of the flag means:

The first fold of our flag is a symbol of life.

The second fold is a symbol of our belief in eternal life.

The third fold is made in honor and remembrance of the veteran departing our ranks, and who gave a portion of his or her life for the defense of our country to attain peace throughout the world.

The fourth fold represents our weaker nature; as American citizens trusting in God, it is to Him we turn in times of peace, as well as in times of war, for His divine guidance.

The fifth fold is a tribute to our country, for in the words of Stephen Decatur, “Our country, in dealing with other countries, may she always be right, but it is still our country, right or wrong.”

The sixth fold is for where our hearts lie. It is with our heart that we pledge allegiance to the flag of the United States of America, and to the republic for which it stands, one nation under God, indivisible, with liberty and justice for all.

The seventh fold is a tribute to our armed forces, for it is through the armed forces that we protect our country and our flag against all enemies, whether they be found within or without the boundaries of our republic.

The eighth fold is a tribute to the one who entered into the valley of the shadow of death, that we might see the light of day, and to honor our mother, for whom it flies on Mother’s Day.

The ninth fold is a tribute to womanhood, for it has been through their faith, love, loyalty and devotion that the character of the men and women who have made this country great have been molded.

The 10th fold is a tribute to father, for he, too, has given his sons and daughters for the defense of our country since he or she was first born.

The 11th fold, in the eyes of Hebrew citizens, represents the lower portion of the seal of King David and King Solomon and glorifies, in their eyes, the God of Abraham, Isaac and Jacob.

The 12th fold, in the eyes of a Christian citizen, represents an emblem of eternity and glorifies, in their eyes, God the Father, the Son and Holy Ghost.

When the flag is completely folded, the stars are uppermost, reminding us of our national motto, “In God We Trust.”

After the flag is completely folded and tucked in, it has the appearance of a cocked hat, ever reminding us of the soldiers who served under Gen. George Washington and the sailors and Marines who served under Capt. John Paul Jones and were followed by their comrades and shipmates in the U.S. Armed Forces, preserving for us the rights, privileges and freedoms we enjoy today.

Here’s the full video where you can see the flag in its final triangle shape.

Isn’t it great to know there are still people out there who respect our country, flag, and those who served? An amazing moment. Hats off to this former Marine! 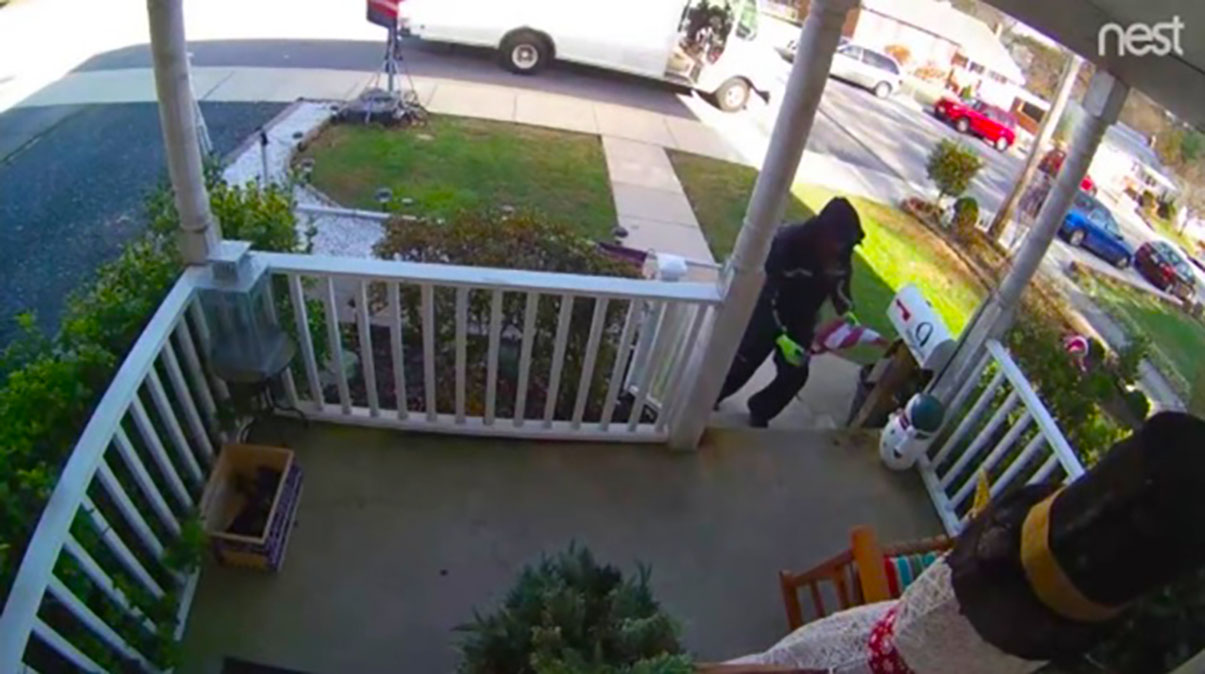