We all saw Trump’s epic showdown with CNN reporter Jim Acosta the other day. Acosta’s press pass was revoked after he made physical contact with a White House aide who was trying to take the microphone to hand to another reporter.

It was a great day for all when we got news that Acosta had been banned from the White House. Of course, a DC court ordered Acosta’s press pass be returned, so now we’ll be subjected to his antics again.

Pete Hegseth is a senior political analyst for Fox News & also a co-host on Fox & Friends. Hegseth served with the 101st Airborne in Iraq, and in Afghanistan with the Minnesota Army National Guard. He’s no one to trifle with, but he does have an excellent sense of humor.

President Trump spoke to Fox’s Chris Wallace about what would happen if Acosta gets out of hand in the future:

Trump sat down with the “Fox News Sunday” host on Friday for a wide-ranging discussion – the first time Wallace has interviewed Trump since he took office. Wallace pointed out that a federal judge ruled earlier Friday that the White House must reinstate Acosta’s press credential.

“Yeah, its fine, I mean it’s not a big deal. What they said, though, is that we have to create rules and regulations for conduct etc. etc. We’re doing that, were going to write them up right now. It’s not a big deal and if he misbehaves, we’ll throw him out or we’ll stop the news conference,” Trump said.

READ HOW JEFF ESCAPED A GANG, MEXICAN CARTELS, AND LIFE ON THE STREETS TO RUN FOR GOVERNOR & WORK FOR A TRIPLE-AMPUTEE WAR HERO

Wallace asked what rules the administration would put in place going forward after U.S. District Judge Timothy J. Kelly declared that Acosta should be allowed back in the White House.

“We’re writing them now. We’ll have rules of decorum, you know you can’t keep asking questions. We had a lot of reporters in that room, many many reporters in that room and they were unable to ask questions because this guy gets up and starts, you know, doing what he’s supposed to be doing for him and for CNN and you know just shouting out questions and making statements, too,” Trump said.

Kelly’s decision is temporary and further hearings are expected to take place in the next few weeks to determine whether or not yanking the credential violated CNN’s and Acosta’s First and Fifth Amendment rights. The temporary order lasts for 14 days and CNN can now petition the Court for a permanent injunction.

“I will say this, look, nobody believes in the First Amendment more than I do and if I think somebody is acting out of sorts I will leave. I will say thank you very much everybody, I appreciate you coming and I’ll leave,” Trump continued. “And those reporters will not be too friendly to whoever it is that’s acting up.””

After that interview, Hegseth shared the following picture on his Twitter account where it immediately went viral. It depicts the White House briefing room with a high chair set up for Acosta.

Other hilarious pictures of Acosta have surfaced on the net in recent days. The one below is probably the best. It pretty much sums up what Trump & Sarah Sanders have to deal with when Acosta acts out, which is more often than not. 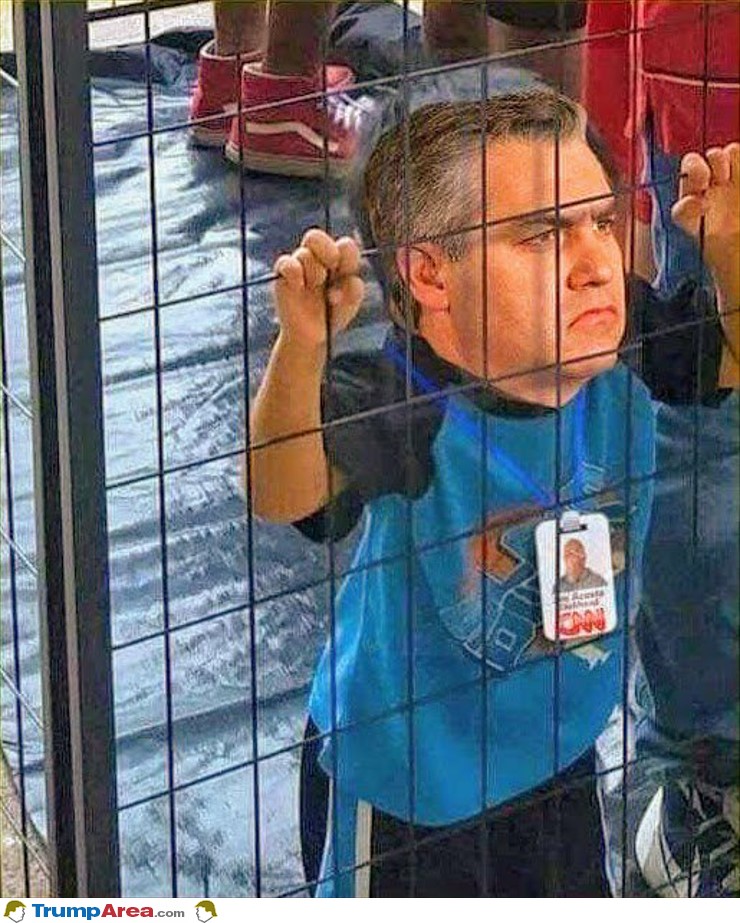 Share this if you think Trump should get Acosta a high chair!

READ HOW JEFF ESCAPED A GANG, MEXICAN CARTELS, AND LIFE ON THE STREETS TO RUN FOR GOVERNOR & WORK FOR A TRIPLE-AMPUTEE WAR HERO