When ABC refused to renew the extremely successful show, “Last Man Standing,” many believed it was because the main character played by Tim Allen was conservative.

Thankfully, Fox picked up the sitcom which began airing again in September. In an interview a few days ago, Allen revealed how he likes to take on the “liberal point of view,” and it’s awesome.

“With the return of “Last Man Standing” on Fox, Tim Allen has the chance to continue doing what he loves, presenting an alternative point of view in comedy. In a recent interview, the actor is opening up about the political divide in America and having to answer for his character’s outspoken opinions.

When ABC pulled the plug on the sitcom after six successful seasons, many wondered if the character of Mike Baxter’s personal politics had something to do with the decision by the network to ax the right-leaning humor show. The series made its return on Fox for Season 7, where Allen and the writers pulled no punches when it came to skewering what he perceives to be an over-sensitive American left.

“I said there’s nothing, especially in this area, that pisses people off more than a very funny conservative. A smart, funny conservative that takes shots and is certainly self-effacing. The left-wing point of view is so pervasive that they don’t even realize it’s a point of view. It is just a point of view,” Allen said in an interview with IndieWire. “I think this character likes that, he likes to have another point of view. It makes him sharper and more interesting. But we don’t push it. I don’t think we’ve mentioned pro or con Trump once now.”

Still, despite his propensity for wanting to disrupt the general consensus of what’s funny and politically correct, Allen admits that it’s difficult when fans equate his personal beliefs to that of the character he plays. 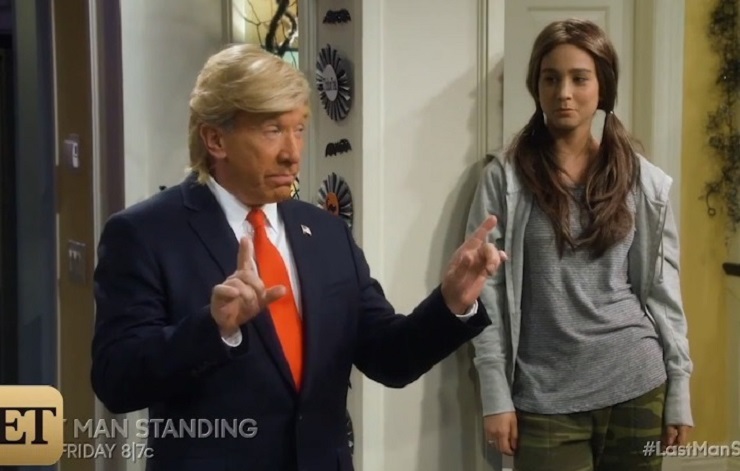 “I did an interview and I said, ‘Are you asking Mike Baxter this question, because you heard something about the Clintons that the writers had written?’ Now, I’ll put something behind it, because I think it’s funny to make fun of people that are full of themselves.

Liberals have a very small window of sense of humor about themselves, so I love poking at it. Two years ago, it was the conservatives, or whatever it is.

In the past, Allen has said that he wants to portray a conservative American on screen in a sitcom. However, he’s also said that he also doesn’t want “Last Man Standing” to be a completely political show, but rather a comedy about family.”

When Allen was asked about attending Trump’s inauguration last year, he said being a conservative in Hollywood is like living in Nazi Germany. He was asked the question on “Jimmy Kimmel Live” to which he responded:

“You gotta be real careful around here. You get beat up if you don’t believe what everybody else believes. This is like ’30s Germany.”

Comedy in politics is something we sorely need right now. It’s great that the show was renewed by Fox to provide a little comic relief for an extremely divided country.

Share this if you’re glad a conservative is allowed to mock libs on TV!