Trump was Pissed! CNN’s Acosta wouldn’t give up the mic when Trump asked and he pushed a WH aide’s arm as she tried to take it from him. Then Trump lets him Have it! Then he goes off on another reporter, LOL.

This is the best TV, ever, LOL. Trump started moving from the podium & it looks like he wanted to go bust up Acosta or grab the mic from him personally. 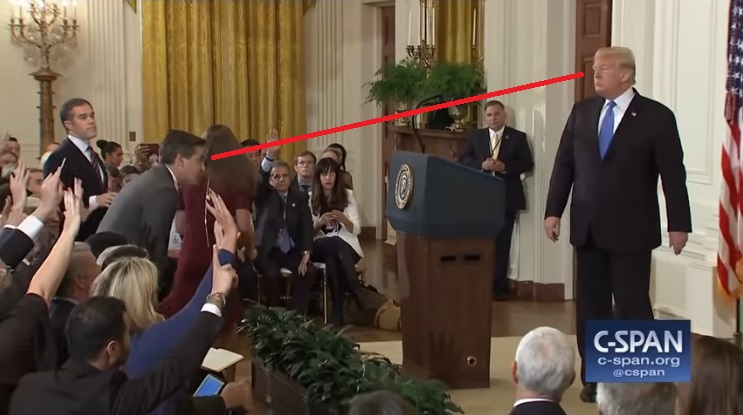 So much awesome going on here.

“President Trump clashed dramatically at Wednesday’s press conference with CNN White House reporter Jim Acosta, after the CNN star peppered Trump with questions and refused to give up the microphone as he asked about the migrant caravan and Russia investigation.

“That’s enough. Put down the mic,” he ordered Acosta, as a White House aide tried to take the microphone from him, only for Acosta to initially refuse to turn it over and push her arm down. “I tell you what, CNN should be ashamed of itself having you working for them. You are a rude, terrible person, you shouldn’t be working for CNN.”

CNN fired back on Twitter, calling his attacks on the media “un-American.”

It was one of several testy exchanges during the nearly 90-minute press conference. The dispute began when Acosta first asked Trump about the migrant caravan approaching the U.S. southern border. After challenging Trump whether the caravan really was an “invasion,” as Trump had previously stated, Acosta proceeded to “caravan-splain” to Trump.

“The caravan was not an invasion, it is a group of migrants moving up the border from Central America towards the border with the U.S.,” the reporter scolded Trump.

“Thank you for telling me that, I appreciate it,” Trump said, before saying he had not “demonized” immigrants as Acosta claimed.

But as Trump answered, Acosta repeatedly interjected and went back and forth with Trump over how the White House had characterized the caravan.

“They’re hundreds of miles away, that’s not an invasion,” Acosta said.

“Honestly, I think you should let me run the country, you run CNN and if you did it well, your ratings would be much better,” Trump said.

Acosta later asked about the Russian investigation, which Trump then called a “hoax.” After Acosta eventually sat down, Trump said “the way you treat [White House Press Secretary Sarah Huckabee Sanders] is horrible and the way you treat other people is horrible,”

Acosta was helped by fellow reporter and NBC correspondent Peter Alexander, who called Acosta a “diligent reporter who busts his butt.”

Trump shot back: “Well, I’m not a big fan of yours either, to be honest.”

At that point, Acosta stood up and kept speaking to the president, to which Trump had another retort.

“When you report fake news, which CNN does a lot, you are the enemy of the people,” he said.

The Republican National Committee pointed to the exchange that the media was going “overboard” with its “grandstanding.”

I sat in the front row of today’s press conference.

We all value a free press, but it’s unfortunate that some reporters seem more interested in getting their own cable show than doing their jobs.

“We all value a free press, but it’s unfortunate that some reporters seem more interested in getting their own cable show than doing their jobs,” RNC Chairwoman Ronna McDaniel said.”

Watch Trump vs Acosta in this epic showdown.

Share if you think Acosta got what he deserved!

Sarah Sanders will love this

Trump: We Have Removed Over 3600 VA Employees Who Were Neglecting Our Vets