It’s happening all over again!

The Associated Press is reporting (Note – The AP is extremely anti-Trump but they had reporters on the ground so I included their report – I could care less if tear gas from the Border Patrol affected “migrant children,” their parents shouldn’t have brought them when they tried to breach a sovereign border):

“U.S. authorities fired tear gas into Mexico during the first hours of the new year to repel about 150 migrants who tried to breach the border fence in Tijuana.

U.S. Customs and Border Protection said in a statement later Tuesday the gas was used to target rock throwers apart from the migrants who were trying to cross.

“No agents witnessed any of the migrants at the fence line, including children, experiencing effects of the chemical agents, which were targeted at the rock throwers further away,” the statement said.

An Associated Press photographer saw at least three volleys of gas launched onto the Mexican side of the border near Tijuana’s beach that affected the migrants, including women and children, as well as journalists. The AP saw rocks thrown only after U.S. agents fired the tear gas. 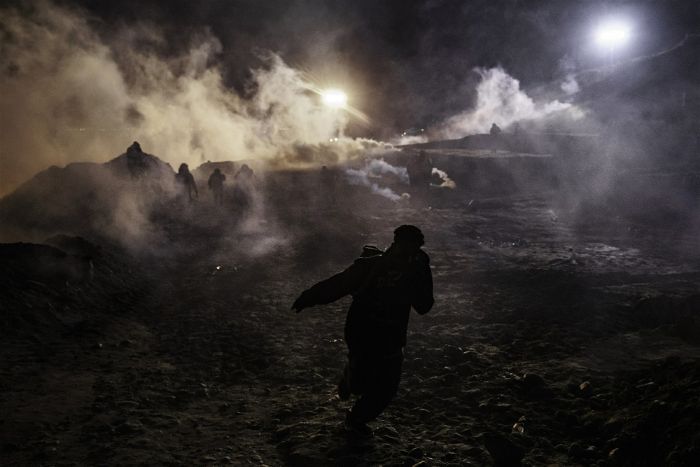 The agency said agents saw “toddler sized children” being passed over concertina wire with difficulty. It said its agents could not assist the children because of the rocks being thrown. 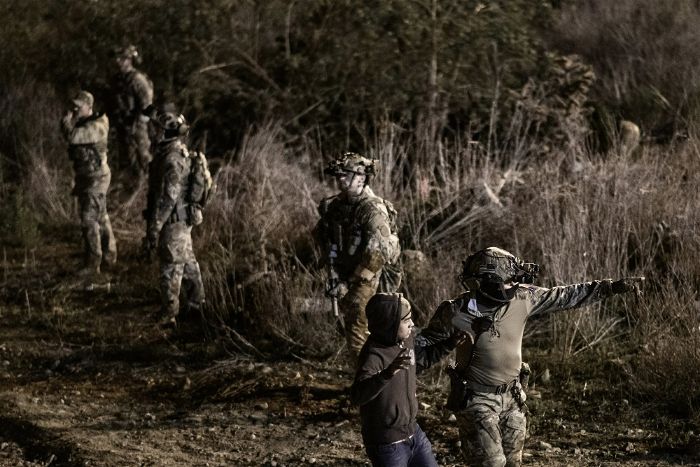 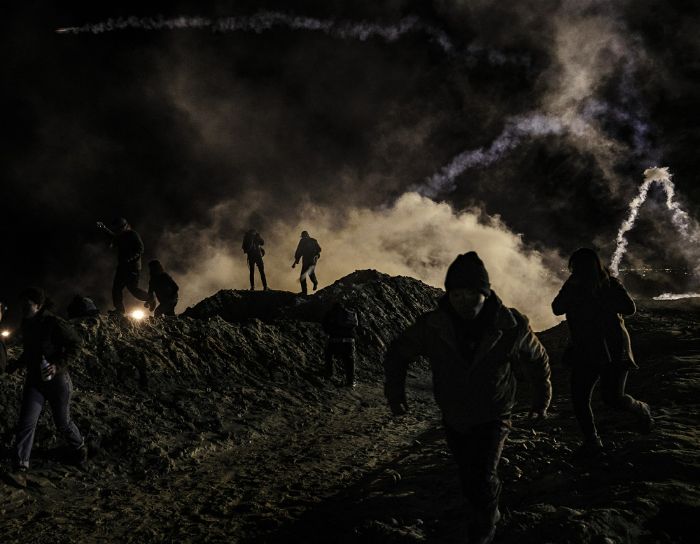 The agency said 25 migrants were detained while others crawled back into Mexico through a hole under the fence.

Customs and Border Protection said that under its use of force policy the incident would be reviewed by its Office of Professional Responsibility.

RELATED: Border Patrol Deputy Chief: ‘We Are Being Overwhelmed’

Migrants who spoke with AP said they arrived in Tijuana last month with the caravan from Honduras. 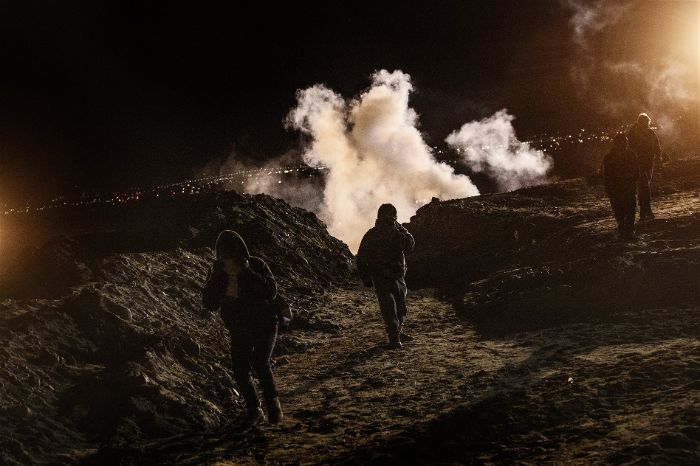 The caravan, which left Honduras in mid-October, grew to more than 6,000 members during its month-and-a-half trek north. ”

“Migrants faced tear gas once again as they tried to cross the US-Mexico border from Tijuana to San Diego on New Year’s Eve.

Around 100 Central American caravan migrants failed in their attempt to cross the border and enter the US on Monday.

As night fell and people on both sides of the border prepared to celebrate New Year’s Eve, the migrants tried to cross over.

The US Customs and Border Protection (CPB) then hurled two smoke bombs at the migrants, holding them back. 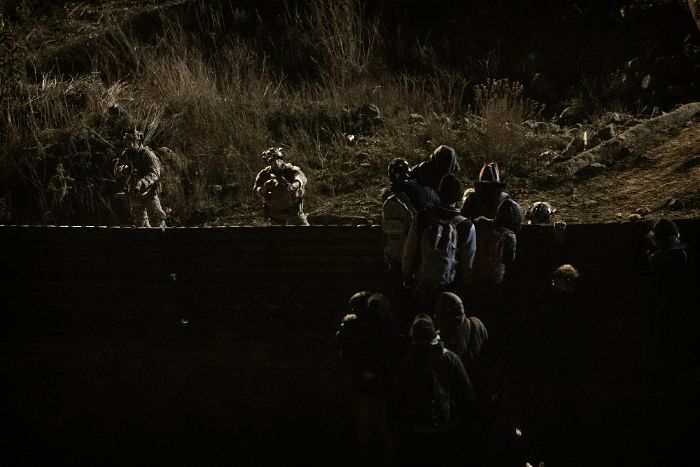 One migrant could be seen with his face covered in treatment after tear gas was thrown at the Mexican side of the fence in Tijuana.

Other photos showed migrants trying to take cover as a thick wall of tear gas surrounded them, or crying out in pain after they were hit by the gas.

The Department of Homeland Security accused the ‘violent mob of migrants’ of initiating attacks against U.S. border agents. 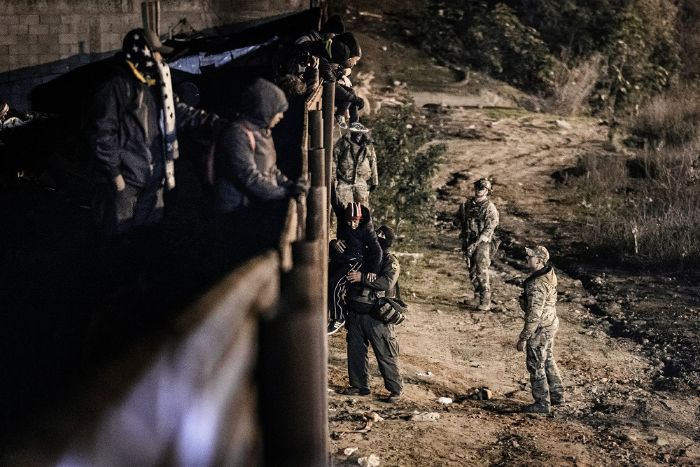 ‘Once again we have had a violent mob of migrants attempt to enter the United States illegally by attacking our agents with projectiles,’ DHS spokesperson Katie Waldman said.

‘As has happened before – in this and previous administrations – our personnel used the minimum force necessary to defend themselves, defend our border, and restore order.

‘The agents involved should be applauded for handling the situation with no reported injuries to the attackers.

‘Initial reporting indicates that once the attempted illegal entry was thwarted by agents, the mob began pushing women and minors to the front, forcing minors to climb dangerous concertina wire, and encouraged conveniently invited media to begin filming their illegal acts.

‘Unfortunately, Congress continues ignore the professional advice from the men and women of the Border Patrol who have told them that walls work.

‘Congress needs to fully fund the border wall, amend the TVPRA, and end the Flores Settlement Agreement that encourages and rewards this type of lawlessness by migrants at the border.’ ”

“The following is based on initial operational reporting. Last night, an approximately 150 migrants attempted to illegally enter the United States by climbing over and crawling under border fence in San Diego Sector. Due to CBP’s increased presence, a first group of 45 turned back towards Mexico. Shortly thereafter, migrants began throwing rocks over the fence at the CBP agents and officers. Several teenagers, wrapped in heavy jackets, blankets and rubber mats were put over the concertina wire. Border Patrol agents witnessed members of the group attempt to lift toddler sized children up and over the concertina wire and having difficulty accomplishing the task in a safe manner. Agents were not in a position to safely assist the children due to the large number of rocks being thrown at them.

To address the rock throwers assaulting agents and risking the safety of migrants attempting to cross who were already on the U.S. side, both smoke and minimal countermeasures were deployed. Agents deployed smoke, pepper spray and CS gas to a position upwind of the rock throwers and south of the border fence. The deployments were not directed at the migrants attempting entry on the U.S. side or at the fence line. The rock throwers were located south of the fence, in an elevated position both above the border fence area and the incursion attempt.

These countermeasures successfully suppressed the rock throwers causing them to flee the area. Most of the migrants attempting the incursion, to include those with children, returned to Mexico via a hole under the fence and by climbing over the fence. No agents witnessed any of the migrants at the fence line, including children, experiencing effects of the chemical agents, which were targeted at the rock throwers further away. Twenty-five apprehensions, including two teenage migrants, were made. Under CBP use of force policy, this incident will be reviewed by CBP’s Office of Professional Responsibility.”

This is why we need the wall!