Recently, newly elected Dem-socialist Alexandria Ocasio-Cortez stated that we need a “Green New Deal” so people don’t die from climate change, she insulted everyone who doesn’t speak Spanish, and she likened the Holocaust to the migrant caravan (Lindsey Graham straightened her out real quick, though).

Now, she is comparing her election to the historic moon landing. You just can’t make this stuff up!

From the Washington Free Beacon:

“Congresswoman-elect Alexandria Ocasio-Cortez (D., N.Y.) on Friday compared her 2018 election victory to American accomplishments such as the moon landing and the establishment of civil rights.

During a press conference meant to publicize her support of a Green New Deal, a nebulous government spending plan promoting ideas backed by lawmakers like Sen. Bernie Sanders (I., Vt.), Ocasio-Cortez equated Democratic elections victories like her own with other seemingly “impossible” U.S. achievements.

“This is not just about a Green New Deal, this is about a new deal for the United States of America,” she said. “Because in every moment where our country has reached the depths of darkness, in every moment, when we were at the brink, at the cusp, of an abyss, and we did not know if we could be capable of saving ourselves, we have.”

“We’ve done what we thought was impossible,” she told the gathered crowd. “We went to the moon. We electrified the nation. We established civil rights. We enfranchised the country. We dug deep and we did it. We did it, when no one else thought that we could. That’s what we did when so many of us won an election this year. That’s what so many of us did.”

The 29-year-old is the youngest woman ever elected to Congress. She won her district’s primary by overcoming Democratic Caucus Chair Joe Crowley. She defeated economics professor Anthony Pappas in the general election by almost 65 points, though turnout was at 13 percent for registered Democrats. More than 80 percent of eligible voters stayed home on Election Day.

She got past her campaign missteps and won on a proudly progressive platform. The New York Democrat told Politico during her campaign that she embraces the label “democratic socialist.”

“It’s part of what I am,” Ocasio-Cortez said in July.” 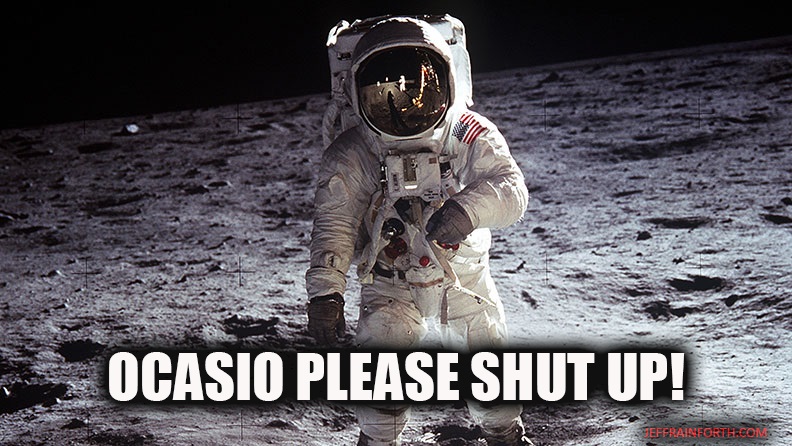