Newly elected Dem-socialist Ocasio-Cortez is going to be a hoot to cover the next few years cuz, she really steps in it, a lot.

Cortez, who just yesterday claimed that we need a “Green New Deal” so people don’t die from climate change, later commented about a panel on Fox News that was apparently talking about her shoes.

Andrew Pestano, a digital editor at Telemundo 51, tweeted “@FoxNews has a four-person panel talking about @Ocasio2018’s shoes in primetime.” He put a facepalm emoji at the end.

Pestano later posted a screenshot of the Fox panel & Cortez’ shoes. Apparently the ones she wore during her campaign will be featured in a museum. 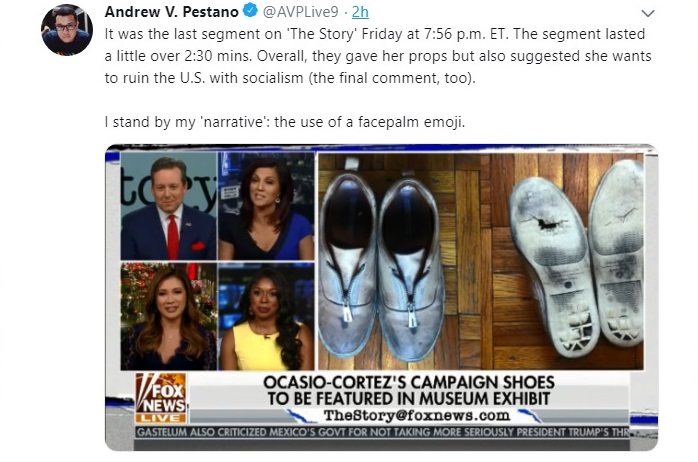 The Microsoft translation of her tweet is “No, it’s not love/What you feel, it’s called Obsession.”

OK, so, you want to Tweet something in Spanish, no big deal. It was what she said after that got her in hot water.

So, basically she said, if you don’t speak Spanish, or, if you only speak English, play this Mariah Carey song to understand what I just Tweeted.

I looked up the Mariah Carey song, Obsessed, and the phrase she tweeted isn’t in the song’s lyrics. Apparently she just made up a new song in Spanish on the spot.

At any rate, Cortez caught flak for implying that everyone who is bilingual knows & understands Spanish. Basically, she said, “if you’re bilingual your second language is Spanish.” As if the second language couldn’t be German, or Russian, or whatever.

And the responses rolled in.

“What if we speak three languages, but Spanish just happens not to be one of them? Are we still “monolingual” in your book? Grow up a little.”

What if we speak three languages, but Spanish just happens not to be one of them? Are we still "monolingual" in your book? Grow up a little.

“A person can be multilingual and not speak Spanish.”

A person can be multilingual and not speak Spanish.

“There are more than two languages by the way.”

And there was this exchange: 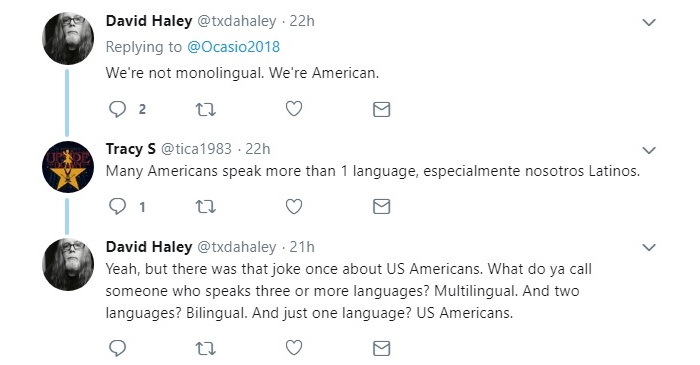 So was Cortez purposefully insulting everyone who doesn’t speak or understand Spanish as if she were better than they are? I dunno. It sure could be taken that way, though.

Teddy got that right!

Share this if you’re proud to be an English speaking American! Murica!