So much awesome. Go, America!

“President Donald Trump and Secretary of Defense Jim Mattis were on hand to start off the annual Army vs. Navy game.

Army and Navy met again Saturday afternoon in the neutral site of Philadelphia to play a football game between the two oldest branches of the armed forces. This year marks the 119th time the two teams have met. A U.S. president is occasionally on hand for the national anthem and coin toss.

President Trump took the field Saturday in Philadelphia before an enormous crowd in Lincoln Financial Field. The audience was composed of Midshipmen of the Navy, West Point cadets and other assembled active duty and military veterans.

President Trump with the coin toss before #ArmyNavyGame 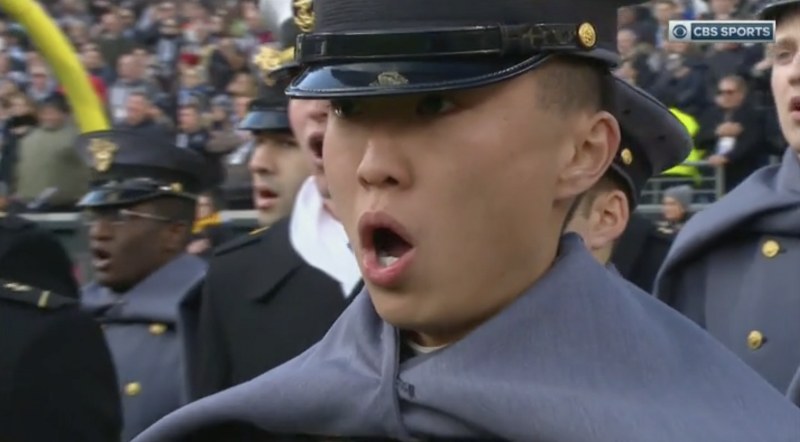 The crowd roared as Trump took the field. Before the game, the student choirs of both military academies join together to sing the national anthem. You could hear a pin drop during the rendition.”

The Army-Navy joint rendition of the National Anthem is perhaps the most beautiful rendition you will ever hear.

God bless the young, kickass men and women of our Armed Forces. pic.twitter.com/rfIIXueTrp

“The commander in chief flew to Philadelphia for the 119th meeting in the storied rivalry between the service academies and officiated the coin toss at Lincoln Financial Field, home of the Super Bowl champion Philadelphia Eagles. Navy called “tails,” and that’s what it was when Trump’s flipped coin landed on the turf. Navy elected to kick off.

Trump, who saw the Army-Navy contest in 2016 as president-elect, is the 10th sitting president to go to the game. President Theodore Roosevelt was the first, in 1901.

March on ✅
The Brigade of Midshipmen march onto the field prior to today’s game.
Kickoff for the 119th #ArmyNavy Game is at 3:00 p.m. #FearTheGoat pic.twitter.com/ZD8L3pv0Dx

The Brigade of Midshipmen.

Like previous commanders in chief, Trump switched sides at halftime in a show of impartiality.

Share if you’re proud of your country & our men & women who serve!