It’s starting & it’s only the beginning! My friend, triple-amputee vet Airman Brian Kolfage has raised almost $19 million for construction of a wall on our southern border.

Kolfage texted me a picture of a billboard with his wall fund website on it last night and then today revealed some major news about what’s going on.

A few days ago, Kolfage returned home after visiting Washington D.C. He worked with some very powerful people at the capitol, and the results of what took place, and is about to take place, will be felt nationwide. Kolfage stated that it will change American history. He’s on his way back to D.C. to finalize some plans tomorrow.

While Brian was in D.C., The Daily Caller shot several videos of him. An epic one that was just released has him destroying Nancy Pelosi and Chuck Schumer over their hypocrisy regarding funding for border security & the wall. Kolfage also slammed comedian Jimmy Kimmel who mocked his efforts & those supporting the wall fund campaign. After Kimmel aired his segment, Kolfage & his family began receiving death threats. Kolfage shredded Kimmel for it in the video.

Despite some in leftist Hollywood mocking his efforts, Brian’s campaign to fund the wall is only getting bigger. Has-been actress Alyssa Milano chided Kolfage & wall supporters for trying to get a wall built “instead” of helping veterans. George Takei, the actor who played Lieutenant Sulu on the TV series Star Trek, mocked Kolfage & those who support a border wall going so far as to suggest they are racists. Those on the left are even targeting Kolfage’s coffee company, leaving racist reviews so people won’t buy his coffee & he won’t be able to support his family.

That’s not stopping the triple-amputee vet or patriotic Americans in their march to get the wall built, though. Airman Kolfage revealed today that a man donated 2000 billboards which will display messages for the wall fund campaign across the southern United States.

“Americans are putting their money where their mouth is. A man donated over 2000 billboards across the southern US. #GofundTheWall. Sign petition http://wefundthewall.com.”

Americans are putting their money where their mouth is. A man donated over 2000 billboards across the southern US. #GofundTheWall

Exactly 25 minutes after Kolfage made the announcement about the billboards, President Trump posted this message to his 57 million followers on Twitter:

“One thing has now been proven. The Democrats do not care about Open Borders and all of the crime and drugs that Open Borders bring!”

One thing has now been proven. The Democrats do not care about Open Borders and all of the crime and drugs that Open Borders bring!

Think President Trump knows what’s going on with Airman Kolfage’s wall campaign? Word is that Trump knows all about it, as do many in his inner circle. 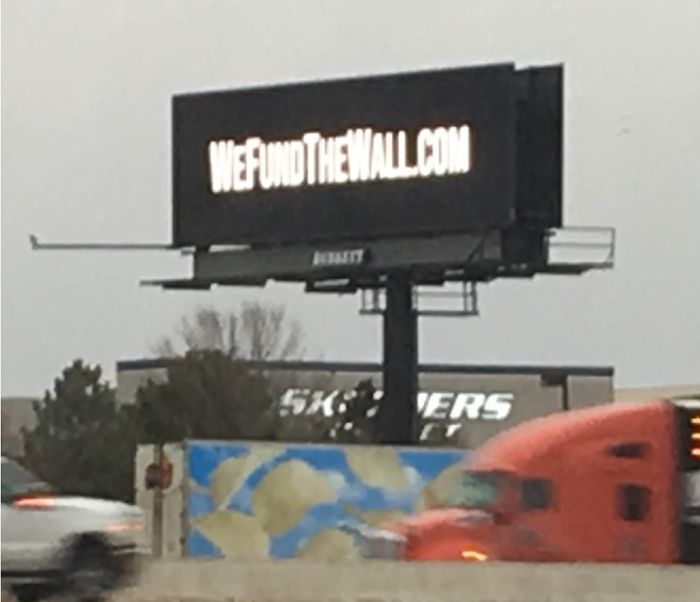 The billboards going up is major. It’s only the beginning, though! When Kolfage reveals who he’s been working with, and what’s about to happen this week, the campaign will explode & become much bigger than anyone could have imagined. It’s going to be massive.