America was transfixed on the confirmation hearing of then judge, now Justice Brett Kavanaugh.

After the leaking of documents that led to Christine Blasey Ford’s accusations against Kavanaugh becoming public, the floodgates opened.

Women came out of the woodwork to accuse him of all sorts of crimes. And Democrats played it for all it was worth. They were willing to do anything to see his confirmation go down in flames, even if it meant destroying an innocent man’s life.

Many of us were skeptical of the almost 40-year-old claims. He organized the drugging & gang rapes of teen girls at high school parties, according to one woman who was represented by porn-star lawyer, Michael Avenatti. He exposed himself at a college party, according to another accuser.

How these accusations never came up during Kavanaugh’s decades of public service had many questioning the truthfulness of the allegations. And now, those of us who were skeptical have been proven right. Again.

A woman who anonymously claimed that Kavanaugh raped her has admitted that she made the whole thing up.

The woman who accused Kavanaugh of raping her turns out to be a leftist activist who was hell-bent on destroying him.

And now she’s in some serious deep sh-t.

“Senate Judiciary Committee Chairman Chuck Grassley on Friday referred a woman who’d accused Supreme Court Justice Brett Kavanaugh of raping her “several times” in the backseat of a car to the Justice Department for “materially false statements” and “obstruction.”

Kavanaugh, confirmed to the high court on Oct. 6, was infamously accused by multiple women of sexual assault and misconduct before the confirmation.

Judy Munro-Leighton, according to Grassley’s office, “alleged that Justice Kavanaugh and a friend had raped her ‘several times each’ in the backseat of a car.”

Those accusations were made via a “Jane Doe” letter provided to Sen. Kamala Harris, a California Democrat and committee member, Grassley’s office wrote. 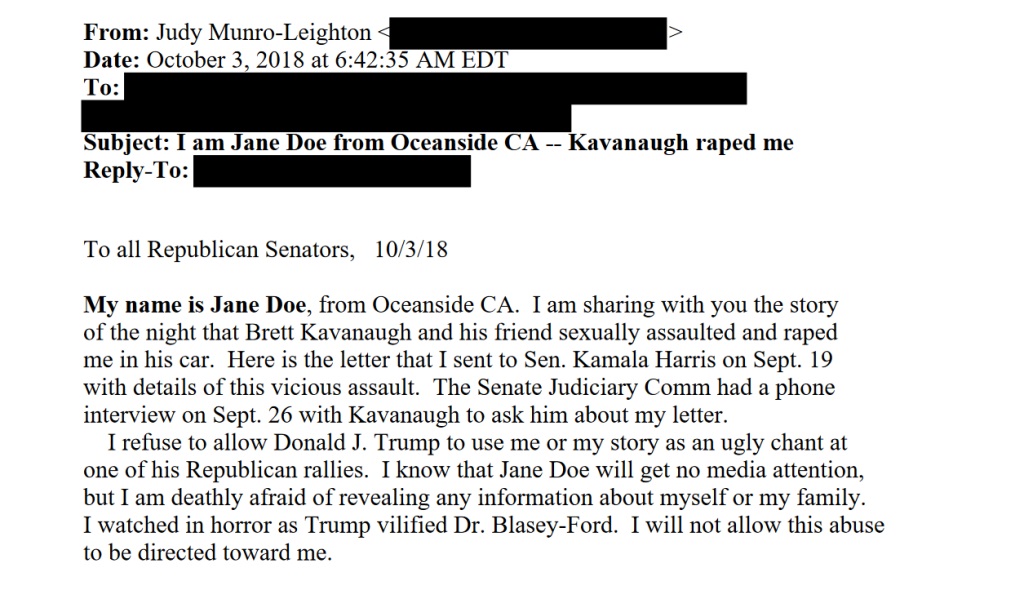 Upon further investigation, however, inconsistencies in the story emerged.

“Given her relatively unique name, Committee investigators were able to use open-source research to locate Ms. Munro-Leighton and determine that she:

(2) is decades older than Judge Kavanaugh; and

(3) lives in neither the Washington DC area nor California, but in Kentucky,” Grassley’s office wrote.

“Under questioning by Committee investigators, Ms. Munro-Leighton admitted, contrary to her prior claims, that she had not been sexually assaulted by … Kavanaugh and was not the author of the original ‘Jane Doe’ letter,” Grassley’s office wrote in a Friday referral to the DOJ.

“When directly asked by Committee investigators if she was, as she had claimed, the ‘Jane Doe’ from Oceanside California who had sent the letter to Senator Harris, she admitted: ‘No, no, no. I did that as a way to grab attention. I am not Jane Doe . . . but I did read Jane Doe’s letter. I read the transcript of the call to your Committee. . . . I saw it online. It was news.”

Grass Ley by on Scribd

“In short, during the Committee’s time-sensitive investigation of allegations against Judge Kavanaugh, Ms. Munro-Leighton submitted a fabricated allegation, which diverted Committee resources. When questioned by Committee investigators she admitted it was false, a ‘ploy,’ and a ‘tactic,’” Grassley’s office wrote. “She was opposed to Judge Kavanaugh’s confirmation.”

Today, Chairman @ChuckGrassley referred Judy Munro-Leighton to @TheJusticeDept for investigation for making materially false statements to the Committee during the course of its investigation. https://t.co/pNfhLRnETy

We knew Dems would go to any lengths to stop Trump’s second SCOTUS pick. And they did. And now the chickens are coming home to roost.

Share this if you think she should go to prison for a LONG time!